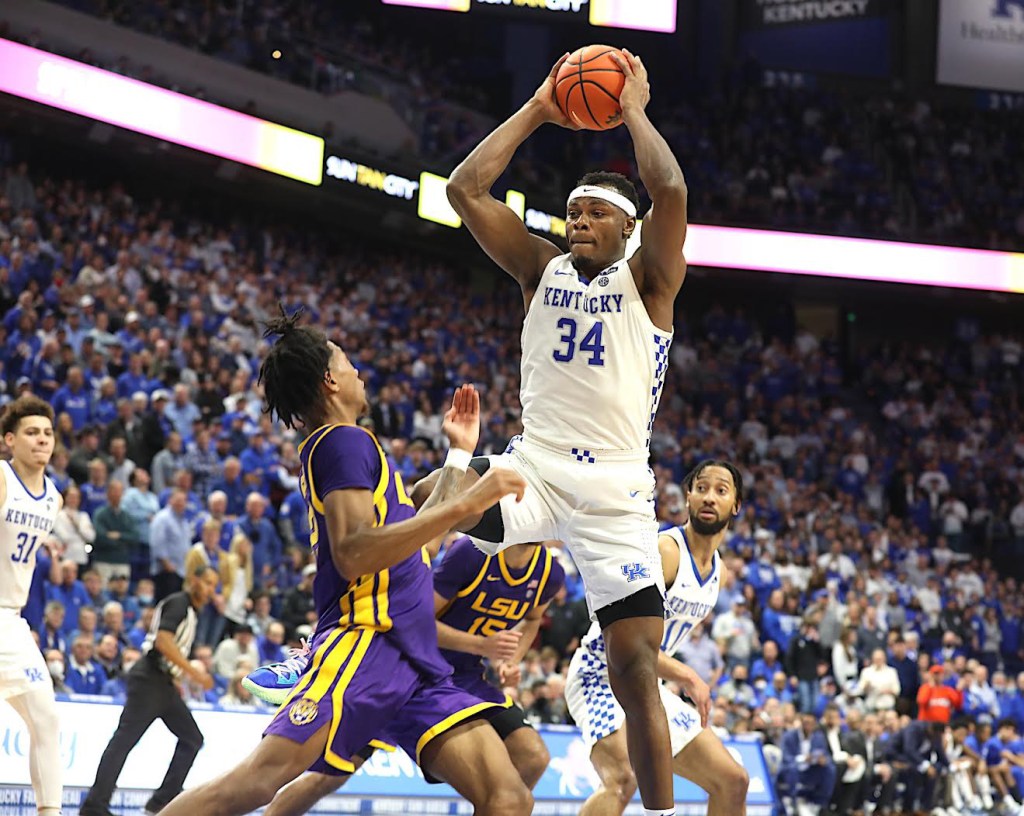 Returning national player Oscar Tshiebwe is a big reason UK is ranked No. 3 in the Blue Ribbon College Basketball Yearbook but five other SEC teams are in the top 25. UK Athletics photo by Vicky Graff

“That has nothing to do with the SEC buying the back cover ad in the book, either. They have done that for the last four years,” joked Dortch. “This league is strong top to bottom. South Carolina might struggle but they also have a high-profile five-star (Greg “GG” Jackson) who had committed to North Carolina originally. He will be a one-and-done guy.

“Coaches around the league love the stuff that (Vanderbilt) coach (Jerry) Stackhouse runs. They might not have great talent but they are not an easy out for any team. (Coach) Matt McMahon had scorched earth when he got to LSU. He had one walk-on player left. But he got a freshman class ranked in the top 20, took a bunch of transfers, including three who played for him at Murray. LSU will be dangerous.”

No SEC team likely will be more dangerous to Kentucky’s SEC title chances than Arkansas and coach Eric Musselman. The Razorbacks have made the Elite Eight the last two years but lost its five primary starters and returned only two scholarship players.

Musselman signed six freshmen, including three McDonald’s All-Americans. Guard Nick Smith is already projected as a top five pick in the 2023 NBA draft and is Blue Ribbon’s SEC Newcomer of the year.

“It’s hard to rank a team with zero returning starters in the top six in the county but they had a crazy recruiting class,” Dortch said. “Nobody works the transfer portal better than Arkansas. They signed a lot of size, including Trevon Gracile of Missouri. They also added Ricky Council of Wichita State.

“He just has a way of getting his guys to really put out and they just are not afraid of anybody. They just do not quit.”

Dortch has North Carolina, which lost to Kansas in the national title game, No. 1 in his preseason poll followed by Gonzaga, Kentucky, Houston and Duke. The Tar Heels return Armando Bacot, a likely challenger for national player of the year honors, along with dynamic guard Caleb Love. The addition of 6-11 Northwestern transfer Pete Nance elevated North Carolina over Gonzaga to No. 1.

“Nance can pass, handle the ball, shoot well and protect the rim,” Dortch said. “He was just what they needed.”

“It’s one of the most veteran teams Cal has ever had. There will never be a Cal team without five-star freshmen and he has some great ones again,” Dortch said. “He’s got Sahvir Wheeler. If he cuts down on turnovers, he’s a really solid point guard. There is a defensive size liability but you have got to catch him on the other end.

“Then there is Oscar (Tshiebwe). Who could have foreseen the year he had? I knew he would be a good player but nobody could have forecast that year he had. I don’t know if he can do that again but I expect him to play really well again.”

Dortch is looking for a breakout year from 6-9 senior Jacob Toppin who no longer will be in the shadow of anyone else.

“He’s a guy who could make it to the league (NBA). He’s 6-9, mobile, protects the rim,” Dortch said. “Then you have (transfer) Antonio Reeves who has really impressed me. Everybody thinks he is a jump shooter but he can put the ball on the floor and is also a good passer.

“That’s why you could easily make a case for Kentucky being No. 1 but even being that good does not mean winning the SEC this year will be easy.”

Youngstown State head coach Doug Phillips could not say enough good things about Kentucky coach Mark Stoops, a Youngstown native, last week when UK hosted Youngstown and beat the Penguins 31-0. Phillips is also trying to use the blueprint of what Stoops has done at Kentucky to elevate Youngstown’s program.

“I have tremendous respect for what coach Stoops has done. It’s almost like 10 years ago, they said, ‘You know, Kentucky can’t compete in the SEC,’” Phillips said. “Like us, I hear day in and day out, ‘Why do we play in such a tough conference?’ Well, guess why? Playing a tough conference is going to prepare you nationally, just like they have at Kentucky.

“Look at Kentucky, they’re in the top 10 now and they compete in the SEC, they go to bowl games, they win. And their next step is to win the SEC. So it’s kind of a blueprint, you know, can we do the same thing here at Youngstown State in the Missouri Valley? Can we recruit to what we need to?”

Phillips is obviously hearing that Youngstown State can’t do that much like Stoops and associate head coach Vince Marrow, another Youngstown native, heard when they came to Kentucky 10 years ago.

“Recruits and coaches in other states see this foundation is good. They don’t listen to the noise of those picking against us,” Marrow said. “Everybody has a plan until they get punched in the mouth. When you get punched, then you see how serious a program is.

“I had all kinds of friends hitting me up after the Florida win. Everybody can be frontrunners in the preseason and talk about other programs. I know what we got here. How do you not want to come here and play? We run a NFL offense and defense. We project guys into the league. The formula we are using works and wins like the one at Florida just validate that.”

New Louisville basketball coach Kenny Payne was on John Calipari’s staff at Kentucky for 10 years and certainly said how the Wildcats took the upper hand in the UK-Louisville rivalry.

“I think when we talk about the rivalry, the one thing that we have to remember — it’s not on this man (Calipari)  to bring the rivalry,” Payne said. “It’s on us. It’s on the University of Louisville.”

Calipari and Payne were the keynote speakers at the Kentucky Chamber dinner last week in Louisville. Payne wants to see Louisville, where he played on a national championship team, become a top program again.

“This state is going to only be as good as we both are. And that’s one of the reasons I took this job. We need this rivalry to be intense, respectful, but also very competitive,” Payne said.

“If Kentucky is way on top and Louisville is way on the bottom, it’s not where it needs to be. I can’t begin to tell you how many people called me: ‘Kenny, you’ve gotta take the job so that we can have both of these schools on top.’”

Payne had left Calipari’s staff to become an assistant coach with the New York Knicks before returning to his alma mater.

“We have to build a culture to where it’s a real rivalry again,” Payne said.

Former UK all-American punter Max Duffy says he doesn’t want to praise former roommate Luke Fortner too much but he is proud of what Fortner is doing in the NFL.

Fortner, a third-round draft pick, became the first rookie in Jacksonville Jaguars history to start at center in the season-opening game. Fortner got a chance to win the starting spot after long-time center Brandon Linder retired after last season.

“It’s really pretty incredible what he has done,” Duffy said.

Fortner moved from guard to center at UK for the 2021 season. He was not on any NFL draft lists when the season began but played so well for 10-3 UK that he made a name for himself with NFL personnel.

“I had a conversation with him in our house when we lived together. He had decided he did not want to play another year and he had all those degrees, so he thought he would just use one of them,” Duffy said.

However, Fortner eventually decided to take advantage of an extra COVID season.

“I told him he might as well give it one more shot. I said he might never get to put a helmet and shoulder pads on again,” Duffy said. “So he decided he wanted that one more year knowing he would probably never play again.”

Instead, Duffy says Fortner may now get paid to play another 10 years or more.

“It’s funny how it all worked out so well for him,” Duffy said. “But no one works harder than he does. It’s all that work he did off the field that helped him so much. Starting in the NFL is a pretty crazy turnaround for a guy who almost didn’t play that extra year in college. It’s really an unbelievable story.”

Former Mason County star Chris Lofton will have his No. 5 jersey retired by Tennessee when the Vols host Kentucky Jan. 14. The all-time SEC 3-point leader and former All-American will join Bernard King, Ernie Grunfeld, Allan Houston and Dale Ellis as the only players to have a jersey retired.

Lofton led Mason County to the 2003 state championship and the 2004 state title game. He was also named Kentucky’s Mr. Basketball in 2004 but he was not recruited by Kentucky.

Oscar Combs, Cats’ Pause founder and member of the Kentucky Journalism Hall of Fame, thinks it is a well deserved honor for Lofton.

“I’ll say it again. Chris may have been biggest recruiting mistake ever by UK of an instate star that I can remember. Appropriately, the UT honor will come when UK visits Knoxville on Jan. 14,” Combs said.

Lofton earned All-America honors during his sophomore, junior and senior seasons at Tennessee and was named the 2007 SEC Player of the Year. He scored 2,131 career points, still the fourth most in Tennessee history. He hit more than 100 3’s during each of his final three seasons and finished his career with 431 makes, third best in NCAA history when he graduated. He hit .422 percent from long range in his career.

Lofton was diagnosed with cancer at the end of his junior season but he never revealed he had undergone radiation treatments until after his career ended. He started all 36 games his senior season when the Vols reached No. 1 in the Associated Press for the first time in school history.

“I just thought next man up. Just step up and try to fill his spot,” said Wade after Saturday’s 31-0 win. “I just gave a little prayer up to him.”

Wade, a four-star recruit from Spring Hill, Tenn., has played in all three games this year and has two solo tackles, six assists, one pass breakup and one tackle for loss going into this week’s game against Northern Illinois.

“I just try to think to make a play any way that I can. I have been trying to play hard and play aggressive and do my job,” Wade said. “I felt I made some good plays (Saturday) and good reads but I also need to go in the film room and fix my mistakes. I felt I did a pretty good job out there.”

Kentucky coach Mark Stoops said he didn’t think Weaver’s injury would keep him out all season but was uncertain when he might return.