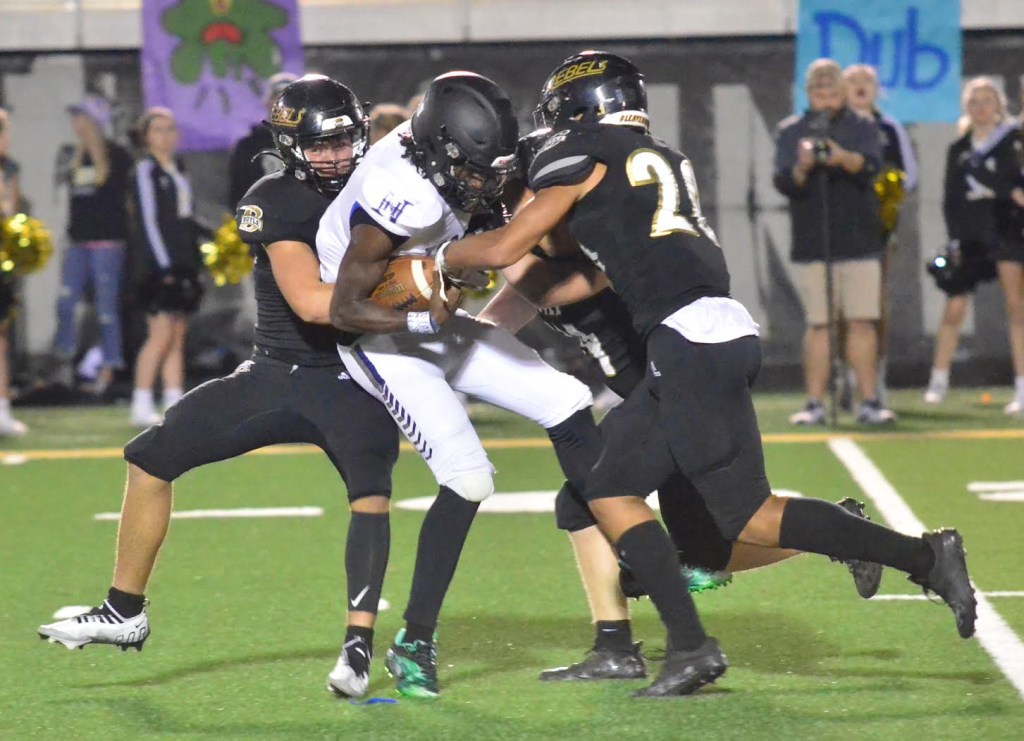 There will be no midterm grade for Boyle County football.

The Rebels reached a logical pause point in the regular season after trouncing North Hardin 65-14 Friday night, with pre-district games done and a bye week ahead, but Coach Justin Haddix wasn’t interested in grading their performance to this point.

Every game is graded on the pass-fail system, and to this point Boyle has passed each test. At the same time, each game is a measurement of the team’s advancement toward its greater goals, and Haddix continues to write “needs improvement” on each weekly progress report, even if he isn’t inclined to assign a grade.

“I hate to say that,” Haddix said. “I’ll worry about where we end up at the end of the season. It’s hard to say right now.”

It’s easy to say that Haddix found much to like Friday at Rebel Stadium. It’s also easy to say that there were things he didn’t like, which will give the Rebels plenty to do before their next game Oct. 7 at Lexington Catholic.

“We’ve still got a lot of things to work on,” Haddix said. “I feel like the growth ceiling of this team is very high. We’ve not played our best game yet.”

Boyle (6-0) forced many more mistakes than it made against North Hardin (3-3) as it posted its largest margin of victory this season and its highest point total in Haddix’s three seasons at the school.

The Rebels took advantage of five turnovers by the Trojans, converting four of those turnovers and an onside kick into touchdowns.

The Boyle offense achieved its highest yardage total of the season for a second consecutive week, and the defense kept North Hardin bottled up save for a couple of big plays.

“We’re playing pretty good, but we’ve still got room to get better,” said linebacker Jayce Crowe, who had a team-high eight tackles for Boyle.

And the Rebels turned big plays on defense into opportunities on offense. North Hardin turned the ball over on its first two series and three of its first four, and Boyle’s first three touchdowns were set up by turnovers.

“We just trust our training,” Boyle linebacker Gage Feltner said. “We have great coaching, and we just did what we practiced and came out and performed.”

Feltner intercepted a pass on the third play of the game that led to Boyle’s first touchdown less than two minutes later.

Boyle’s defense also negated a North Hardin rushing attack that had been averaging 181 yards per game. The Rebels allowed only 26 rushing yards and held the Trojans’ top running back, Kye Boyd, to 2 yards on four attempts.

“We just came out and punched them in the mouth,” Crowe said. “We got them held back in distance and put pressure on them and stopped them.”

North Hardin had 167 passing yards, but most of those came on two plays. Shaun Boykins Jr. had touchdown receptions of 70 and 71 yards in the final five minutes of the first half, getting almost all of those yards after the catches.

“He’s a good player, (and) he made two great plays,” Haddix said. “When you play good people, things like that are going to happen some.”

Boyle was leading 30-0 and headed toward the running-clock rule midway through the second quarter before Boykins’ scores delayed that by a full period.

“I’m very proud of our team and the way we responded in the second half and took care of business,” Haddix said.

That included continuing to run the ball effectively behind another strong performance by the offensive line. Boyle ran for 299 of its 466 offensive yards and picked up another 28 yards on shovel passes.

“I feel like we’re really getting better up front and the backs are running good,” Haddix said.

The Rebels’ passing game thrived on short throws as Sage Dawson went 18 for 23 for 167 yards with no completions longer than 18 yards.

The Rebels drove 80 yards on the opening series of the second half for a score that gave them a 44-14 lead, and they triggered the mercy rule for the third time this season when Quisenberry returned a punt 65 yards for a touchdown with 3:01 to play in the third quarter.

It was the second special teams touchdown of the season for Quisenberry, who also scored on a 7-yard run and has a team-high 12 TDs.

Bodner scored his seventh and eighth TDs of the season on runs of 1 and 25 yards, and he had 16 rushing attempts for 116 yards and seven receptions for 81 yards.

Stone, Rahbany and Trent Blakemore also had rushing touchdowns and Cole Andrews kicked a 26-yard field goal for the Rebels, whose 65 points were the most they have scored since a 71-28 win over Christian Academy on Sept. 20, 2019.