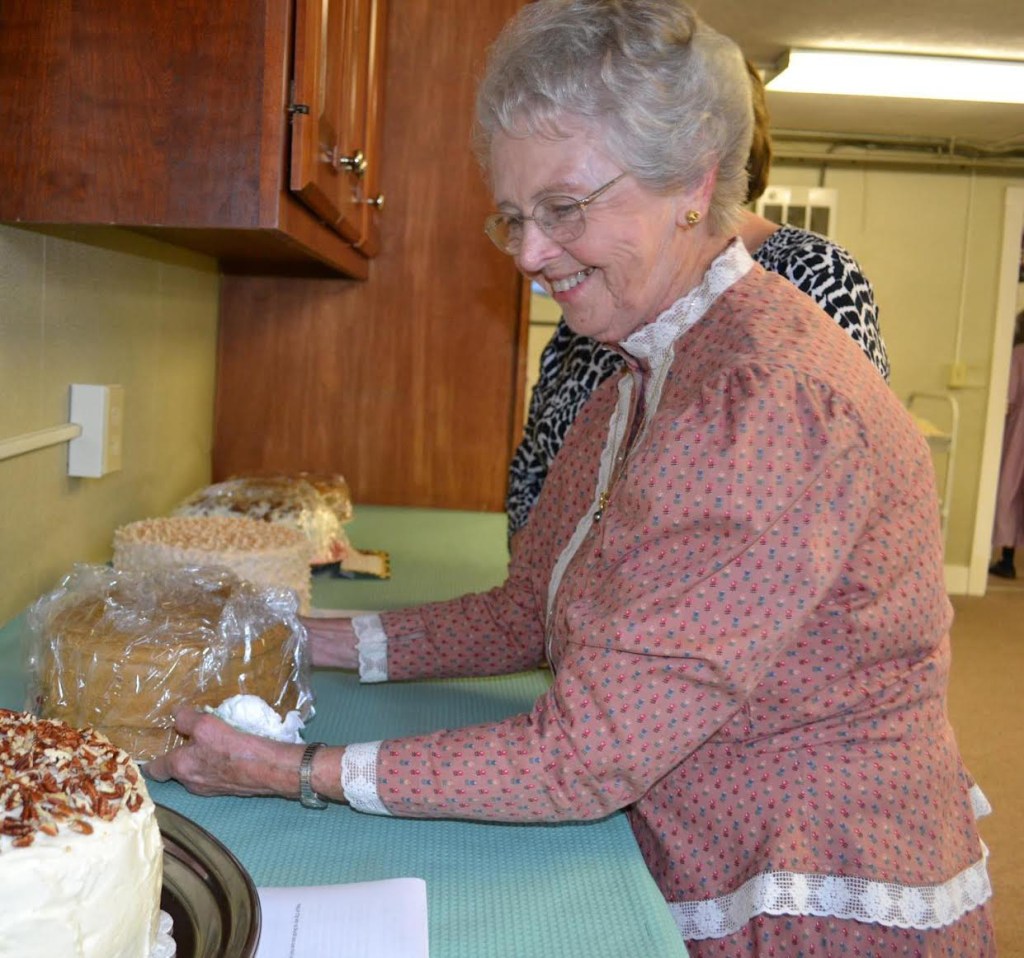 At 91, Doris Purdom is the oldest member of the Forkland Festival. Photo submitted

The Old Country Supper Theatre, commonly known as the Bean Supper, has been an important part of the Forkland Festival since the first one, 51 years ago.

Each year, guests have been served a traditional Forkland meal of pinto beans, cornbread and all the fixin’s, with homemade sorghum cake for dessert by people of the community, while being entertained by local talent. After the meal comes the hilarious drama, based on real people and experiences in Forkland, portrayed by locals.

Lavicia Daugherty, a longtime teacher and principal at Forkland School, wrote and directed the plays for 25 years. After she stepped down, plays were written and directed by several others, including Wayne Thurman, Jamie Hamblin, Brian and Heather Caldwell, Matthew Ellis and Doris Purdom. For the past several years, Sandy Hogue, Daugherty’s niece, has been writing and directing the plays, in addition to being an important member of the cast. And the cast for most of the plays has been quite large (37 actors this year), with just about any member of the Forkland community who wanted to get up on stage participating.

The preparation and serving of the meal is another big task.

For the first 40 years, Doris Purdom was in charge of it; she has helped every year since then. And there have been numerous behind-the-scenes cooks and volunteers who have helped clean and set up the gym each year. This year’s cooking team is headed by Kay Pike, and Tammy Burger is in charge of transforming the gym into an attractive setting. The bean supper has always been served by dozens of young Forklanders, ages 8 to 18. Many local kids have gotten their first volunteer experiences this way.

This year, two young adults — Summer Poynter and Sara Williams -— are in charge, and there are numerous other adults who help seat guests, carry the food to the gym, aid with serving and more. An important job is selling the tickets, which has been done by Janie Drye for many years. Local talent entertains the guests during the meal — this year, Phillip Clarkson on Friday evening, and Dawn Osborne and Steve Shepperson on Saturday evening.

After two years with no Bean Supper and Drama due to Covid-19, Forklanders are excitedly preparing to bring it back this year at the 51st Forkland Heritage Festival & Revue on Oct. 14-15.

The play this year, “That’s Forkland For Ya,” is about the beginnings of the Forkland Festival, and it includes characters from Forkland Community Center’s early days who will be familiar to many attendees. Play practice has already begun, and the production is shaping up to be very enjoyable and funny.

The youngest members of the cast are Lakin Burger and Hazie Ellis, who are both 9 years old but have already been in the play at least twice. The oldest member of the cast is the 91-year-old Purdom, who has been in more than 40 plays.

The Supper will begin each evening at 7 p.m. (doors open at 6:30), and the Drama will begin around 8:30 p.m. Reservations, at $20 per person, are required. There are only 230 seats each night, so don’t delay. You can make reservations online at www.forklandcomctr.org (credit card required), or contact Janie Drye at 270-402-2768. Bleacher seats for the drama only are $5, available the day of the event.