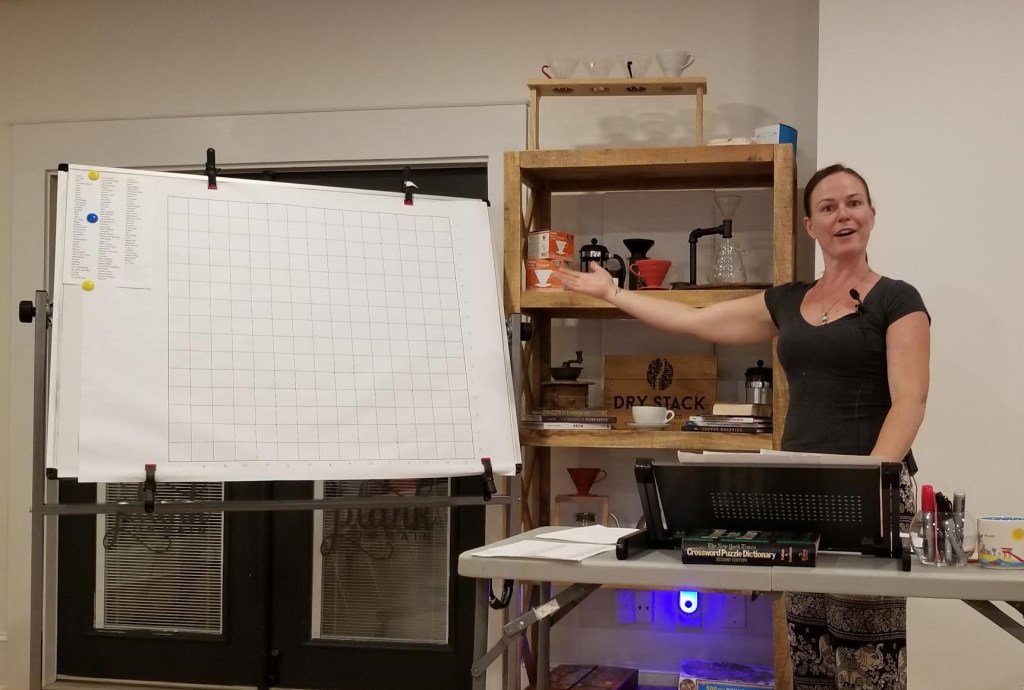 Erika Sengstack stars in a one-woman performance of The Crossword Play (Or Ezmeranda’s Gift) at Dry Stack Coffee Company in Danville. Photo by Mimi Becker

Scarlet Cup Theater’s production of The Crossword Play (or Esmeranda’s Gift) by Donna Hoke is site-based, using real-life venues to present their plays. For example, Aidan’s Gift, a story about a priest’s gift of a magnificent voice, was staged at Centenary United Methodist Church; Distant Music, a story about an Irish bar in Boston, was staged at The Wilderness Trail Distillery; and Departures, where people meet and part ways at airports, was staged at Stuart Powell Field.

This is a one-woman show, and Erika Sengstack gives a dynamic performance. Who would have thought that crossword puzzles could have such an impact?

With her physical and emotional range, Sengstack commands the stage and makes the audience care about crosswords.

The play opens with her conducting a workshop on how to construct a puzzle. The audience not only are educated during this process, but are taken on a tour where art meets life and things are much more complex than they seem.

For those who love crossword puzzles, the definitions and words that we encounter all the time unite us in a common bond. For the uninitiated, it’s the road map to follow as you begin that wonderful journey.

Under Sengstack’s tutelage we understand more and more until the final reveal, which we should have seen coming, but don’t.

The play runs through Oct. 9. Evening performances are at 7 p.m., Sunday performances at 3 p.m. Tickets are available at danvillearts.org. Or at the door.

Adria Mahon is a former president of The West T. Hill Community Theatre, where she appeared in 10 productions over the years. She has been a contestant on the TV shows Password and Match Game, and is a member of The Game Group.