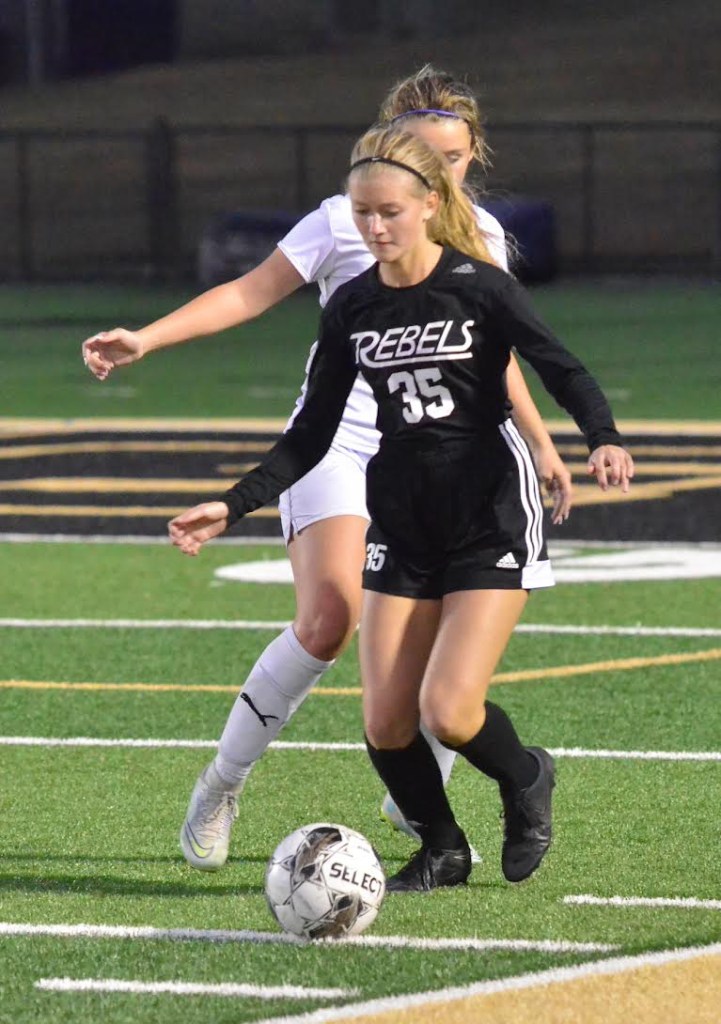 Sophie Moller of Boyle County moves in front of an East Jessamine player to play the ball during the first half Wednesday. Photo by Mike Marsee

It has been a long road back, and there are still miles to go. But the road ahead of the Boyle County girls looks more promising than it has in some time.

The Lady Rebels are rolling into the postseason with arguably their best chance to win a regional championship in four years as they are beginning to reap the rewards of a years-long rebuilding process.

A still-young team has shown steady improvement throughout the regular season and impressed their coach with the way they have played.

“I’m just really proud of how they have bought into the grind of the last three years of the rebuilding process that we had to go through,” Boyle Coach Brian Deem said.

Boyle (12-4) concluded a successful regular season Wednesday night with an 8-0 victory over East Jessamine. The Lady Rebels will enter the postseason with the best record in the 12th Region.

Postseason play begins Monday with the semifinals of the boys 45th District Tournament at Boyle, and the girls semifinals will be Tuesday at Danville. The district finals will be Wednesday (boys) and Thursday (girls).

Boyle holds the No. 1 seed in both tournaments. The Boyle boys, who were runners-up in the 12th Region last season, are the region’s top-rated team in the statewide Maher Rankings; the Boyle girls are second only to West Jessamine, which has won six straight regional titles.

Boyle’s girls have won with a team consisting almost entirely of underclassmen. Of the 21 girls on the roster, 15 are freshmen or sophomores.

The girls exceeded their win total from last season with their victory Wednesday, which featured two goals each by freshmen Reagan Britt, Maggie Burke and Addison Hazlett and the sixth shutout of the season by the Boyle defense.

The Lady Rebels had a six-game winning streak before a loss at Lafayette last week, and they have eight wins in their last nine games.

“I feel like we’ve really improved throughout the year,” said Hazlett, who leads Boyle with 18 goals.

“I think where they’ve exceeded (expectations) the most is how unselfish they are and how close they’ve grown together,” he said.

Deem said the team’s two seniors, Abigail Gnann and Karlee Johnson, and their leadership style have had a great deal to do with that.

“They have convinced those kids to follow them with love, with loyalty and with understanding of what the expectations are,” he said.

The team’s top five points leaders and its primary goalkeeper are underclassmen. Many of the team’s young players have played for a club team coached by Boyle assistant coach Chelsea Burns, who is on maternity leave after giving birth to a daughter last week.

“That’s how we’ve really bonded closer together,” Hazlett said. “I think that really helps us.”

Deem said there’s no doubt about it.

“The more you get these kids playing together, the more they buy into a philosophy, (and) you can see it on the field,” he said.

Boyle, which last won the 12th Region in 2015, went 26-23-7 in the three seasons after reaching the regional finals in 2018. The Lady Rebels returned to the top of the 45th District last year, but their season ended in the first round of the regional.

The postseason will be a new experience for the freshmen who have played such a large role in this team’s success, but it’s one they’re looking forward to.

“I think we’re all really excited about it,” Hazlett said. “Maybe a little bit of nervousness, but I think it will be fun and exciting.”

Deem said one key to making sure the fun continues well into October is to stay focused on the task at hand.

No matter what, he said this has been a season to remember.

“To rebuild it back and to see us competing at the level we’re competing at right now, it’s just been fantastic, and I couldn’t imagine myself being with anybody else,” Deem said.