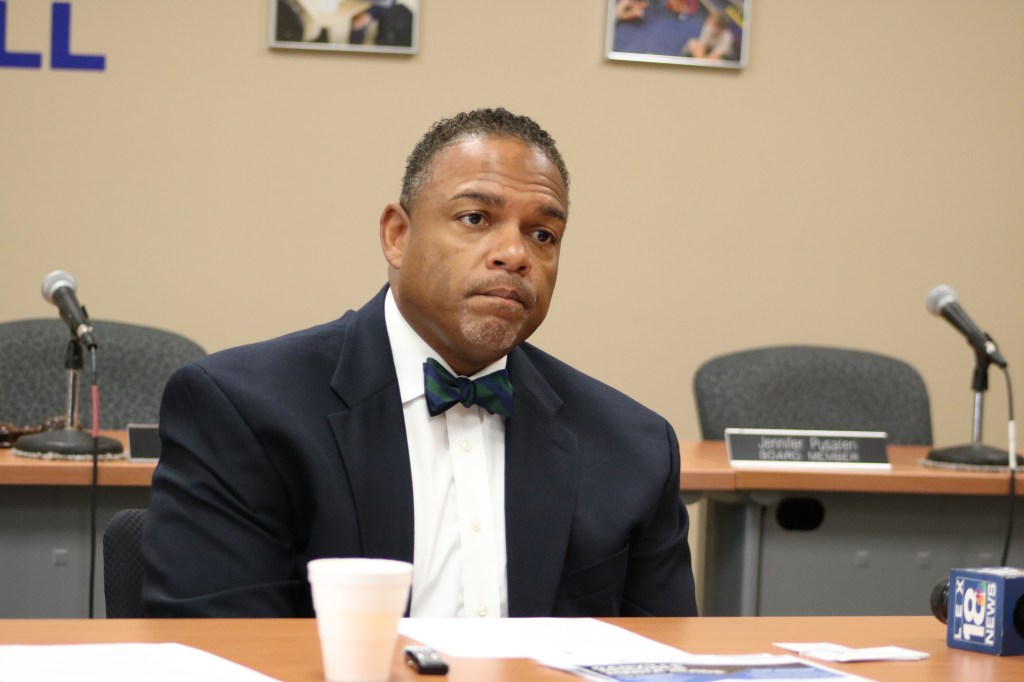 Danville Superintendent Greg Ross speaks about his goals for the district. Photo by Lance Gaither.

Since starting the position on July 1, Ross has been working with people from the school district and the community at large to see how they can improve the schools.

Ross said some of his main goals are to make Danville the premier district in the state; increase dual credit, internships, and career/technical opportunities; help every child find their genius; build communal partnerships that grow Danville; and have the top teaching and instructional core.

“We want all our kids to be college-ready, but college is not for everyone,” Ross said. “So if we know that our kids are college-ready but can move right into a working domain that is going to provide them a successful career, probably making more money than I’ll ever make, that’s what’s important to us.”

Ross has been meeting with other organizations in the community like the hospital and Centre College to see how else they can get students more college-ready. Another goal is to encourage students to stay and work in Danville after they graduate, as there are currently many open jobs nearby.

He explained that at Danville’s recent Hall of Fame induction, he heard alumni say they felt they needed to leave Danville to be successful. But Ross said he wants students to see that they can stay and be successful. He is working to create local partnerships to make that happen.

“Building those partnerships allows students to know that when they finish here, it’s not just that they are needed here, they are desired here; we want our students to be successful in Danville.”

Another need is to have enough good teachers in the district. Ross said he is talking with David Young from the Central Kentucky Education Cooperative about a program they have that works with community members who want to become teachers but don’t have degrees. Those people can work through his program to become teachers.

“We’re still in discussion with that, but I think it could be a huge win for our community that has amazing people in it that may not have finished a four-year degree, and that’s the option nine area that’s just been approved by legislation,” Ross said.

Ross is applying for a 21st Century Community Learning Centers grant, which would put about $150,000 annually into the district for a number of years. He said he’s been able to get that grant in three other districts, and feels confident that he can get it for Danville.

That money would go toward making sure students get better academic focus. Ross said the district needs to work on assessment and achievement.

“Our scores have dropped in the past few years, and we’ve got to get those up,” he said. “I get it that most schools’ scores in the state have dropped because of Covid, but we’re going to look beyond excuses and focus on excellence.”

With safety being a growing concern in many schools, Kentucky recently passed a mandate that all districts must have a school resource officer at every campus. Danville Schools did not meet that mandate due to lack of funding, the same as many other districts. But Ross said he was recently at a superintendents meeting in Louisville where a legislator’s wife said that they are fighting this year for that mandate to be funded.

While Danville doesn’t have an officer at every campus, those officers visit every campus. Schools being in close proximity helps in that area, and Ross said they are working with the police chief to get a third officer.

Another priority for Ross is making renovations in Bate Middle School, which is an aging but historic building.

“With the history of Bate and all that it stands for in this community, our students should walk in and see something extremely beautiful; they should be excited about going in that building every day, and because of our leadership and our teachers, they are excited,” he said. “But I want the visual experience to say ‘excellence lives here.’”

Ross said this district is in the top 5 most diverse districts in Kentucky. He is the first African American superintendent of Danville Schools. He said they are hoping to increase celebrations of diversity, like having a Juneteenth celebration, and events for Hispanic Heritage month.

Part of what drew Ross to Danville is its diversity, and that it’s similar to his hometown of Paducah.

“The diversity, the passion for the downtown scene, the love of the arts, the athletic and arts push, it’s a lot of similarities to home; it felt very natural and comfortable to come to a community like this,” he said.

The district has put together a superintendent’s advisory council, which was open to the whole community. It is made up of people from the hospital, Centre College, concerned citizens, parents, and others, to help Ross get a feel for the issues.

“They bring back so much information to me that allows me to hear and get a pulse for the community,” he said.

The district is also putting together a student advisory committee for the superintendent’s office. This will give students a representative from each school except Hogsett to share their ideas with administration.