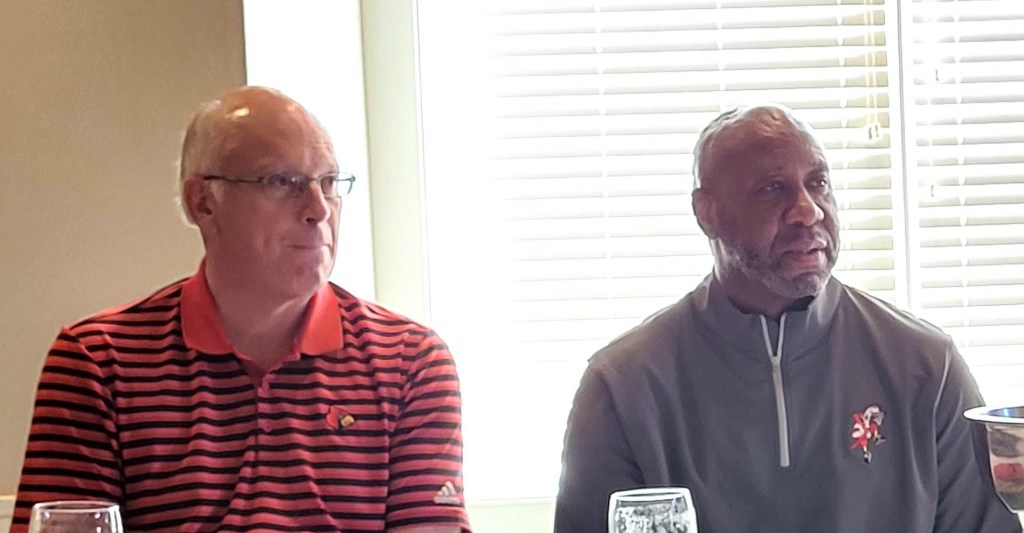 Milt Wagner, right, says the 1983 Louisville-Kentucky game was a classic that should be mentioned more in conversations about the best college basketball games. Larry Vaught photo

Kentucky and Louisville are involved in an intense recruiting battle for New Jersey high school teammates DJ Wagner and Aaron Bradshaw, who both apparently will visit UK for Big Blue Madness but may not visit the Cards for Louisville Live a week later.

Milt Wagner, the director of player development and alumni relations for the Louisville men’s basketball program, is DJ Wagner’s grandfather and was an assistant coach at Memphis under John Calipari.

However, he’s known plenty about the UK-Louisville rivalry for years and remembers a time 39 years ago when the basketball rivalry got started. That is when Louisville beat Kentucky 80-68 in overtime in the “Dream Game” in the 1983 Mideast Regional final with a Final Four berth at stake.

It was the first time the schools had played since 1959 — a fact Wagner still remembers today. He had 18 points, including eight straight, in overtime.

“We had not played each other in 24 years and it was to get to the Final Four and it went to overtime. The  memories of that game are unbelievable. It was an unreal game. Under the circumstances, it was crazy,” said Wagner. “First they made a run on us, then we made a run. We were battling. They tied it (on a shot by Jim Master) to go to overtime and then we went to another level.”

Another level? Louisville hit 30 of its final 36 shots, including 22 of 27 in the second half and overtime to hold off Kentucky. Wagner believes the game should be remembered as one of the greatest college games ever even though it normally is not mentioned among the all-time best college basketball games.

“It should be. I really feel that way. People don’t understand what it was like since we had not played each other in 24 years and it was to get to the Final Four,” Wagner said. “I know fans today think the rivalry is intense but that year was unreal and because we won, then the teams started playing every year.

“That game was so special. What else could you ask for? Both teams played well. We had that historic overtime run to outscore them 12-0 and it was over. But it was a great game. I will never forget that game. I still watch it when I can.”

Wagner says UK guard Dirk Minniefield is a “good friend.” Kenny “Sky” Walker is someone else he still talks to and he says occasionally he sees Master.

“Today you cannot appreciate what that game meant because the schools play each year. It is a big rivalry now but it just is not the same as it was that year when we did not have each other on the schedule and were not playing every year,” Wagner said.

One of Milt Wagner’s teammates on the Louisville 1986 national championship team, Kenny Payne, is now the Louisville head coach.  They only played together that one season and at that time coaching was not something Payne talked about doing.

“As the years went on, we stayed in contact the whole time. He’s like a brother. All my University of Louisville guys are that way, even the ones I didn’t play with,” Wagner said. “We feel like that is one thing special here. We are trying to bring that back here.

“I think all of our guys have gotten better since the first day. We see a lot of progress from our guys. I think they are going to surprise people this year.”

Wagner says he has not seen anyone who does not like Payne.

“I would like to see someone who doesn’t like him. I don’t think that person exists. He is lovable,” Wagner said.

“Kentucky fans still love him. He’s just a great guy. If you know Kenny, that’s him. There is nothing fake about him. Just a great person. That’s another reason this rivalry isn’t like it was in 1983 for the Dream Game. It will still be intense, but nothing like it was that first year we played.”