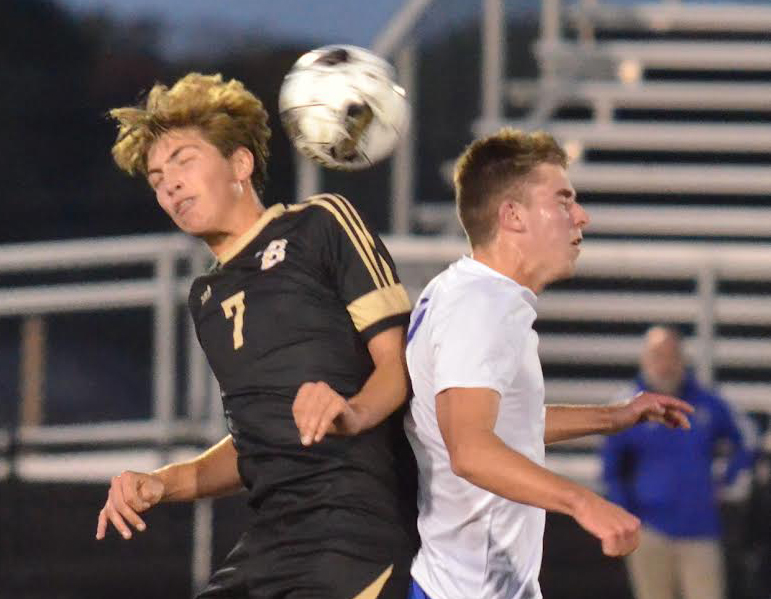 Jack Little, left, of Boyle County and Iain McAlister of Danville collide as each tries to get his head on the ball during the first half Wednesday. Photo by Mike Marsee

Winning a district championship is rarely easy, but the Boyle County boys were up for a challenge.

The Rebels rose to the occasion Wednesday night, fending off Danville for a 1-0 victory in the 45th District Tournament final at Rebel Stadium.

It was a far more competitive game than the regular-season meeting between the crosstown rivals, and that came as no surprise to Boyle Coach David Ritchie.

Alan Wireman scored the only goal of the game late in the first half, and Boyle (15-4-2) locked down Danville (11-5-4) in the second half to secure its third consecutive district championship.

“I thought that, especially in the second half, we really matched their intensity and focused on just trying to possess the ball and keep numbers back more than we usually do,” Ritchie said.

Ritchie said the victory could be a springboard for the Rebels as they prepare for the 12th Region Tournament next week at West Jessamine.

“I think it’s going to be huge, especially since it was such a tough game,” he said. “I think that really shows that effort and intensity that you have to bring every game for 80 minutes.”

Danville Coach Brent Beauman said the game could also give the Admirals a boost after they gave one of their best performances of the season.

“I’m not a let’s hold hands, kumbaya (coach), I don’t blow people up, but in 22 years that’s the proudest I’ve been of a team, … coming in here after the first game, and (with) the dynamics of what this is, for them to stay so focused on the game and each other,” Beauman said.

When the two teams played Sept. 1 for the Constitution Cup, Boyle led Danville 5-1 at halftime and won 6-2. Wireman said the Rebels took their foot off the gas in that game, but not in the rematch.

“Over there we almost settled in too much when we got up a few. This game we kept the pressure on the whole game because they were in it the whole game,” he said.

Wireman’s goal in the 35th minute off a corner kick by Andrew Leines gave the Rebels their fifth consecutive win over the Admirals.

“There was a lot of people in the box. It was a blur, but I saw the ball come out in front of me and I had to attack it,” he said.

Boyle missed a chance to seize control of the game in the early going when Danville goalkeeper Grayson Nagorka stopped a penalty kick in the second minute, but Wireman’s goal gave the Rebels momentum as the first half wound down.

“That was definitely huge, and I feel like it gave our guys a lot more energy coming out for the second half, and it helped us with some of our game plans going into the second half,” Ritchie said.

Boyle outshot Danville 11-5 in the first half, and although the Rebels got off only four shots in the second half, they held the Admirals to just two.

“Our defense was great. They had a few opportunities, and we shut them down,” Wireman said.

Beauman said even though the Admirals couldn’t put the ball in the net, he couldn’t have asked for better execution of their game plan.

“They did exactly what we talked about in practice, they did what we have done all year,” he said. “They play together, they talk together, … they build each other up. For a bunch of teenage boys, it’s pretty incredible, the team chemistry they have going.

“The past three or four games we just kind of forgot that the game had started for about 10 minutes, but tonight it was from the whistle, and it was good.”

Boyle has reached its highest win total since 2014, and Ritchie, the Rebels’ fourth coach in the past four seasons, said this win was a fitting reward for their efforts since the preseason.

“They put in a lot of hard work, and it’s always exciting when you win a trophy,” he said.

The Boyle girls played Lincoln County on Thursday night for the 45th District girls championship. Both teams will advance to next week’s regional at Southwestern or Wayne County.