Admirals right the ship with win over Somerset 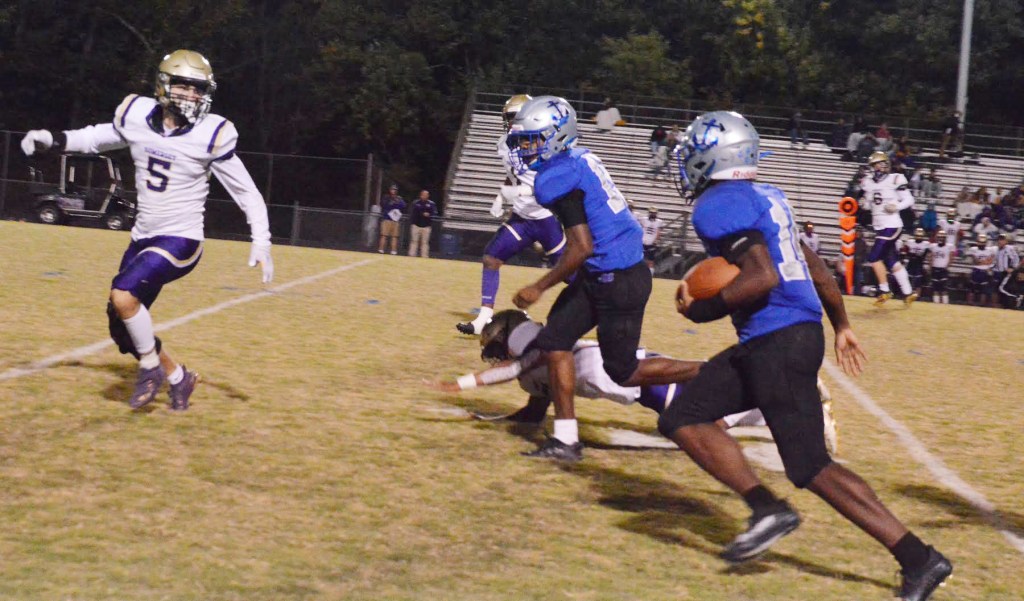 DeMauriah Brown, right, of Danville carries the ball as teammate Jalen Dunn blocks for him during the second half Friday. Photo by Isabella Murray

The pride is back at Danville.

After seemingly everything had gone against them over the previous five weeks, the Admirals fought back Friday night to earn their first victory since August.

Danville emerged from a rough patch Friday night at Admiral Stadium to defeat Somerset 35-14 in its district opener, ending a four-game losing streak and perhaps propelling them toward success in the rest of their district schedule.

“I feel fantastic. I’m just so proud of our guys, very happy for them,” Danville Coach Mark Peach said. “They went through a tough stretch there. We played some real quality football teams. … For us to be able to pull out a win in district play, I’m just really happy for them.”

Danville had lost four consecutive games for the first time since 2019, and for the most part the Admirals were overpowered by their previous four opponents, who outscored them 149-77.

However, Peach said he thinks his players can learn valuable lessons from the difficult road they’ve been on recently.

“I hope that’s what the guys take away from it, that in life when adversity hits, you’ve just gotta keep working, keep plugging away, keep encouraging each other,” he said.

Danville (3-4, 1-0 District 2A-4) dispatched Somerset (4-4, 0-1) for the third time in two seasons behind an exceptional rushing effort by DeMauriah Brown, who ran for a career-high 286 yards on 17 carries and scored all five of the Admirals’ touchdowns.

Brown, whom Peach said was “absolutely sensational,” had the most rushing yards for a Danville player in a single game since Don Harris ran for 291 yards on the same date in 2016 in a 25-7 win over Somerset, and he became the first Admiral to score five touchdowns in a game since Aug. 24, 2019, when Caleb Burns ran for five TDs in a 48-14 win over John Hardin.

“Defensively, we have to find No. 14 and figure out a way to tackle him,” Somerset Coach Robbie Lucas said. “He is a very good player, yes he is.”

The teams were stuck in a scoreless stalemate throughout the first quarter. The action began to pick up immediately in the second quarter, however, when Guy Bailey scored for Somerset on a 9-yard run following a Danville penalty.

“The whole team’s energy was up the whole time, so I felt like we needed to score so we can keep our heads up and keep playing hard,” Brown said.

Brown’s second touchdown followed a turnover created by Will Ewing, who intercepted a pass by Somerset quarterback Kris Hughes.

Danville got another big defensive play at the close of the first half when Richard Norris sacked Hughes, preserving the Admirals’ 14-7 lead.

Josh Bixler got a sack at the start of the third quarter that resulted in a fumble and a change of possession, and that was immediately followed by another  touchdown by Brown on the very next play.

The fourth quarter began with another touchdown by Brown, and he scored once more with less than four minutes on the clock.

Somerset, which hadn’t scored since early second quarter, added one more score in the final minute on a 20-yard run by Josh Bruner.

Danville got all of its 346 offensive yards on the ground. Braidin Baughman rushed for 52 yards, and he also had an interception.

The Admirals’ defense held the Jumpers to 195 yards.

After getting off to a good start in district play, the Admirals will look to continue their success this week at Washington County and over the rest of the season.

“We all feel good heading into playoffs,” Brown said. “We played the best game last night and we are going to keep that energy for the rest of the season.”