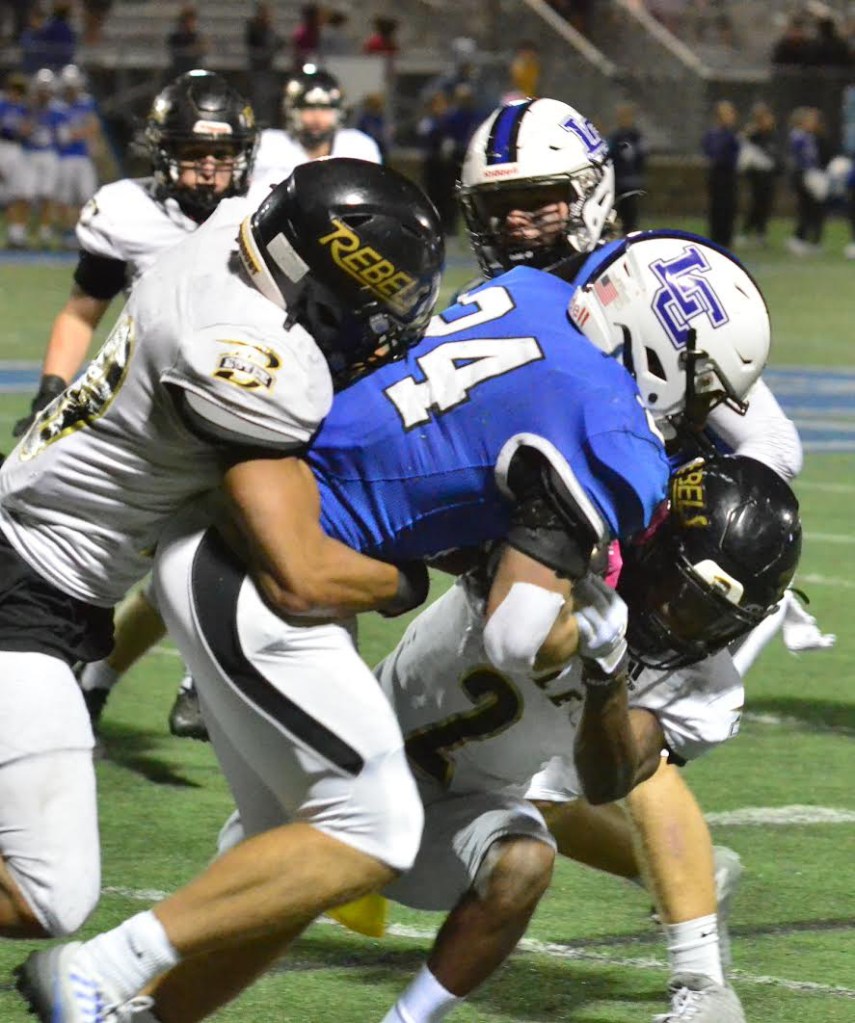 No, the Rebels’ season won’t go off the rails as a result of their fourth-quarter failures in a loss to Lexington Catholic on Friday night.

However, the defeat means Boyle is no longer in control of its own destiny, either within its district or in the statewide ratings that determine home-field advantage in the later rounds of the playoffs.

That means Boyle’s path to a third consecutive Class 4A championship was made more difficult by a 28-27 loss Friday night at Joseph K. Ford Stadium in which it led 20-0 in the second quarter and was outscored 21-0 in the fourth quarter.

“This was a tough, important game, and we just made the road a little tougher for us,” Boyle coach Justin Haddix said. “Anything I’ve ever done has been hard, so this is going to be hard, too.”

LexCath scored two touchdowns in 39 seconds to take the lead for the first time with 2:07 remaining and held on to halt a 19-game Boyle winning streak that had been the longest current win streak in the state and end the Rebels’ nine-game winning streak over the Knights in one of the state’s best district rivalries.

“They’re a good football team, and we knew they’re a good team coming in here,” Haddix said. “We started off strong, and they made plays at the end to win.”

Boyle (6-1, 0-1 District 4A-5) had won 19 straight games since dropping a 35-28 decision to Lexington Christian on Aug. 28, 2021. The Rebels also had won 23 consecutive games against district opponents, including its last nine games against LexCath, since the Knights last beat the Rebels in 2016.

The defeat means the Rebels will almost certainly be seeded second in their district and would almost certainly have to go on the road for a second-round playoff game under the cross-district format that has been reinstated for the first two rounds this season.

It also knocked Boyle out of the top spot in the KHSAA’s Ratings Percentage Index, which will determine the pairings for the third and fourth rounds. The Rebels are now No. 3 in Class 4A behind Corbin and LexCath, meaning a postseason rematch against the Knights (before the state finals) would be on the road if the RPI order remains unchanged.

“Now we have that target on our back,” LexCath coach Bert Bethiany said. “So how do we handle the success? Because we’re going to face that team again. They’re going to be motivated, and we’ll be motivated, too.”

“They made some plays in the passing game, and we knew they could,” Haddix said.

Wasik’s final completion produced the game-tying touchdown as Sam Clements got open between Boyle defenders in the middle of the field for a 53-yard scoring play. Max DeGraff’s extra point gave LexCath the same winning score that Boyle had in the teams’ first meeting 25 years ago.

It was only the second defeat for Boyle in 33 games under Haddix, who said the Rebels will use it for both motivation and education.

“We’re going to get better from this. I just want to win the last game.”

Boyle, which outgained LexCath 338 yards to 317, had ample time to win this game after losing the lead, with 127 seconds and two timeouts to work with. And it appeared the Rebels had pulled out a victory when Sage Dawson hit a wide-open Montavin Quisenberry over the middle for a 54-yard touchdown with eight seconds on the clock.

But the referee had dropped his flag before Dawson ever threw the ball, and the score was wiped out by a false start penalty.

On the drive before LexCath took the lead, Boyle tried to protect a 27-21 lead by running the ball on four straight plays near midfield and forcing the Knights to use their timeouts.

On fourth-and-5 from the LexCath 44, Quisenberry was stopped a half-yard short of a first down that would have allowed the Rebels to run out the clock.

Boyle had converted twice previously on fourth down during scoring drives, and Haddix bet on his offense to do it once more.

“(We were thinking), ‘Let’s finish it on offense,’” Haddix said. “We ended up missing it by half a yard on our sideline. Those are things we’re going to live with. There were a lot more plays besides that one that cost us, but I’ll take that one all day long on me.”

Boyle’s defense had played well for two quarters and part of a third before LexCath’s offense got untracked.

The Knights’ lone first-half scoring drive ate up more than nine minutes, and they went three-and-out on their first series of the second half shortly before they fell behind 27-7.

But they drove 80 yards in 6:01 to score in the second minute of the fourth quarter, and they were off and running both on offense and defense.

Boyle had scored on four of its first five possessions, stopped only by the clock at the end of the first half, but LexCath stopped the Rebels near midfield and forced a punt with 5:16 to play.

The Knights drove 78 yards in 2:32 for a touchdown that pulled them within 27-21, then nearly recovered an onside kick before stopping the Rebels on four running plays that netted 9½ yards.

Avery Bodner scored on a 1-yard run early in the second quarter to make it 20-0, but the extra point attempt was blocked by LexCath’s Justus Wertzler.

Bodner, who also plays defensive back, was forced out of the game by an ankle injury in the third quarter during Boyle’s final scoring drive.

Quisenberry scored from 4 yards out off a direct snap on fourth down to give the Rebels a 27-7 lead with 4:42 left in the third quarter.

Haddix was quick to credit LexCath for making the plays that changed the course of the game in the second half, and he said now it is up to the Rebels to make the most of a disappointing defeat.