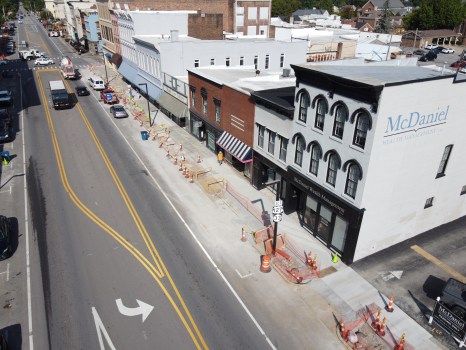 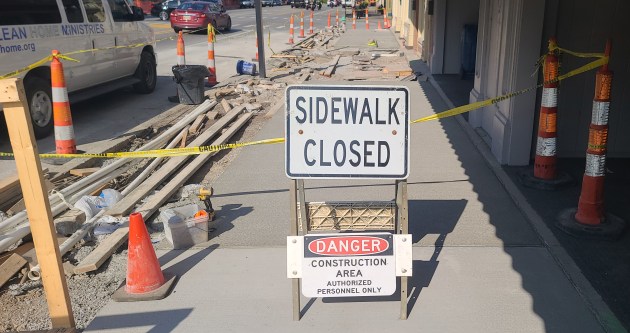 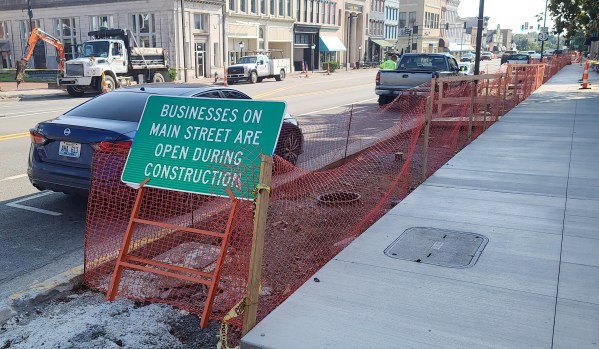 Although sidewalk construction might be a temporary inconvenience to some, many acknowledged the project in its finished form will provide a much-need improvement to the downtown area.

The Downtown Streetscape Improvement Project that began in June is scheduled for completion in May. The project’s goal is to make sidewalks safer and more desirable for pedestrian use, which will be accomplished through the addition of more than 20,000 square feet of public pedestrian space, much of which is earmarked for outdoor seating. Aside from new sidewalks, the project will result in : improved and widened sidewalks; new street and sidewalk lighting, new traffic signal poles, new trees and planters, curb bump-outs to increase pedestrian safety and overhead utility relocation. There will be some loss of parking spaces on some streets, and an increase on others.

Aaron Ranson, owner of Dry Stack Coffee on Main Street, said construction crews have been doing an excellent job of communicating with business owners and minimizing interruptions to business, but that some disruptions are inevitable.

“People see all the fencing and work vehicles and people just don’t come downtown,” Ranson said. “We have noticed a dip in business. Monday they were pouring concrete directly in front of us. I’m thankful we have a back entrance, some businesses didn’t and had to close.”

City Engineer Josh Morgan was on hand at a recent Rotary Club meeting to discuss the project. He presented plans to promote more foot traffic during construction, future plans to improve parking and how the city can partner with downtown businesses to ensure a successful holiday season.

Dry Stack Coffee is not the only business that has experienced a slowdown from the construction project.

Mona Derringer is the manager at The Hub Coffee House and Cafe, and she said that one of the biggest changes she has noticed from the construction is that elderly and disabled people are having a hard time accessing bushinesses downtown, particularly cross the areas under construction. She said that the gravel at the front entrance of the coffee shop is making it difficult for people with mobility issues to navigate the sidewalks. The Hub is planning to have a new outdoor seating area, and Derringer said that she thinks that a more walkable downtown will be a benefit to main street businesses.

Whitaker Bank Senior Vice President Jesse Johnson was one of many people who have said that although the current construction is an inconvenience, the finished project will be worth it.

“Were excited about the end product,” Johnson said. “We understand this has to happen now to have a quality downtown when it’s finished.”

Morgan said that one of the key ways that city is trying to minimize impact on businesses is by having better communication that bushinesses are open downtown. He said he has heard from many people who are avoiding downtown businesses because they believe they are closed during the project. He stated the city has hired a new community liaison who he helps can help address the issue. He went on to say that construction on Main Street will be halted during the holiday season. For beautification, Morgan said he that more trees will be planted downtown than were removed for construction.

The increase in walkability will affect parking downtown. Although the project will remove several of the parallel parking spots the currently line Main Street, Morgan explained in his presentation that surveys conducted by the city have shown that the problem with parking is not a lack of spaces, but rather low usage of existing parking spots. The surveys showed that the majority of people don’t use the parking garage and that the city has not done a good job of having signage, which, Morgan said, the city plans to change.