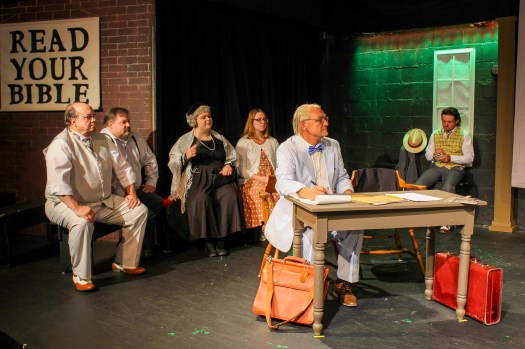 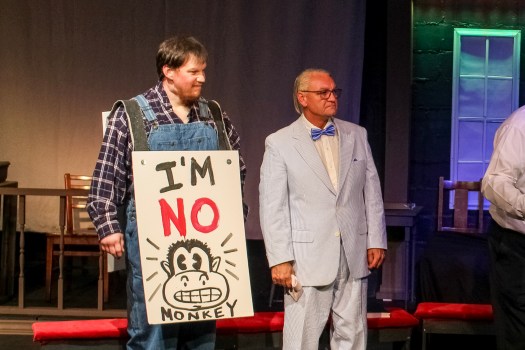 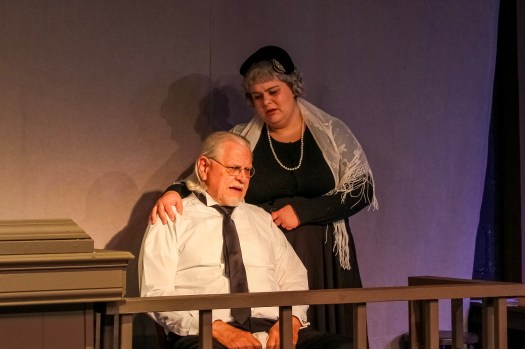 West T. Hill Community Theater is opening this year’s season with a famous courtroom drama, “Inherit the Wind” by Jerome Lawrence and Robert E. Lee. Shows will be on October 14-16 and 21-23 at 7:30 p.m. with the Sunday matinee at 3:00 p.m.

The play is a dramatization about a case known as “The Scopes Monkey Trial” from 1925. John T. Scopes was on trial for teaching Charles Darwin’s theory of evolution to a high school science class, contrary to a Tennessee state law.

A masterpiece of American theater, the play had its genesis pitting creationism against the teaching of scientific fact, Director Karen Logue said.

“This is a timely and important story,” Logue said. “When choosing our season we wanted to offer one serious drama with good writing and challenging characters for our actors to portray.  This fits those desires and should give our audiences a good glimpse into excellent playwriting.”

The real-life trial in Dayton, Tennessee brought high profile lawyers and a media frenzy to the small town. The trial was a way to attract attention to that small town, as teaching creationism vs. Darwinism was a big debate at the time.

However, the play was written in 1955 and according to the playwrights, it was written to criticize the state of McCarthyism in the 50s, which was the practice of making unfounded accusations of treason by supporting communism.

Logue said the play will make people think, and that its themes are still relevant today.

“It certainly will make folks think,” Logue said. “It should also give the community an opportunity to witness some excellent acting from local folks.”

The play is also special to West T. Hill because it was the first play shown in their then-new and current building 30 years ago this month.

The theater is offering one sensory-friendly performance for those who are deaf or uncomfortable in a regular theater audience setting. The Thursday, October 13 dress rehearsal will be open to those patrons. The performance begins at 7:30 p.m. and is free to those having those needs. There will be ASL interpretation.

While the theater has lifted the mask mandate, they encourage those that have not been vaccinated to wear masks, as the theater is a small space. Masks are provided at the box office desk.