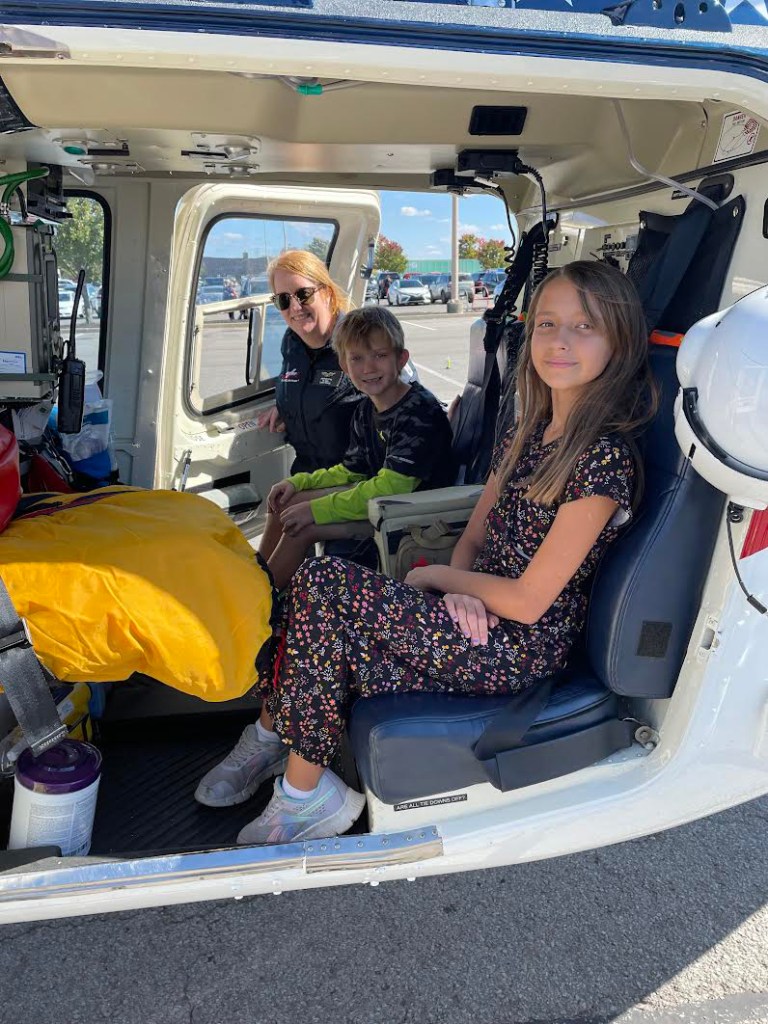 C.J. and Emily Bugg get an up-close-and-personal view of the Air Evac Lifeteam helicopter Saturday. Photo by John Reitman

More than 200 children and their families on Saturday went through the parking lot at Lowe’s in Danville, not necessarily to shop for tools and appliances, but to learn more about public safety.

The draw at Lowe’s was a parade of emergency response vehicles from first responders from Danville and Boyle County to give kids an up close and personal view of how these vehicles perform as well as the jobs of those who operate them.

Kids and their parents got an inside look into police cars, fire trucks and the Air Evac Lifeteam emergency response helicopter that operates out of the Danville-Boyle County Airport. Children also were given plastic fire helmets.

Lowe’s holds a public safety awareness event every October as part of Fire Prevention Week, which is Oct. 9-15.

“We take it a little further, from fire safety to public safety,” said Angela King, department supervisor for Lowe’s in Danville. “We invited Danville and Boyle County (fire departments), Danville Police and this year we were lucky enough to have the Air Evac unit land here.”

The helicopter, crewed by pilot Lionel Long, registered nurse Heather King and flight paramedic Jonathan Wesley, is used to transport patients from rural areas to Ephraim McDowell in Danville, and more serious cases, such as vehicle accidents, to hospitals in Lexington and Louisville.

People do not usually have a chance to get a behind-the-scenes look into emergency-response vehicles until it is too late. This event helps children learn about such vehicles in a safe and fun way.

“A lot of kids don’t get to see these vehicles unless it is an emergency,” Lowe’s King said. “This lets them learn about these vehicles in a way that is not so scary.”

The event is always a hit with local families, but was especially popular this year, she said.