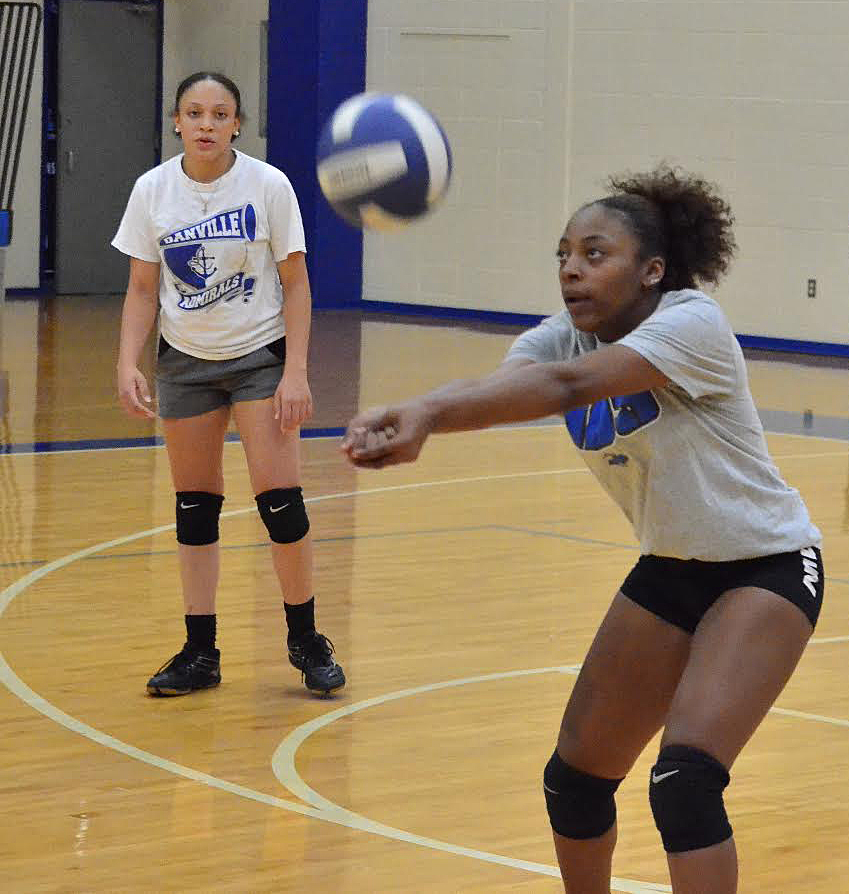 Layla Emerson, right, digs a ball as Alayjah Taylor looks on during a recent practice. Photo by Mike Marsee

Kayleigh Hunstad is in it for the long haul.

Hunstad is all too familiar with the mostly unremarkable history of the Danville volleyball program, and she wants to add some more noteworthy chapters by bringing some continuity to the program she once played for.

Her goals are for the Lady Admirals to achieve both short-term success and long-term stability, and they have already shown considerable improvement in her first season at the helm.

Danville’s record rose above .500 recently for the first time in two years, and although they don’t have a winning record now, the team does have eight more wins this season than they had in 2021.

The Lady Admirals finished the regular season at 11-13, and they went 4-4 in 45th District play to earn the No. 2 seed for the district tournament, which they will host next week.

“It has definitely been a work in progress,” Hunstad said. “The girls came into the season ready and eager to learn and to move forward and to not have the record that they had last year, so we fed off of that and we just went back to some fundamentals and retaught some things and worked on some different positions in order for them to be the best players they could be.”

Hunstad is hoping for more success this season, but she’s also hoping to make success a habit for a program that has had only three winning seasons since it was established in 2006. Coaches have come and gone over the years, but she isn’t planning on going anywhere in the near future.

Any progress Danville has made in past seasons has been short-lived. Hunstad is the eighth head coach in the program’s 17 seasons, and five of the six coaches before her have left after one or two seasons.

Maggie Myers, who spent five seasons at Danville from 2016-20 to become the longest-tenured coach in program history, led the Lady Admirals to consecutive winning seasons and 12th Region Tournament berths in 2019 and ’20. But she left after the 2020 season and the team slipped to 3-16 the following year.

“It’s been nice to actually win this year,” sophomore Hadley Terrell said. “We were always arguing and always switching positions and being upset over that, so this year we’ve grown a little more as a team.”

Hunstad said that has been the area of greatest improvement this season.

“They were individuals in the beginning of the season, and they didn’t rely as much on each other, and now they have figured out how to work better together,” she said.

Sophomore Alayjah Taylor said better communication has been a key to Danville’s turnaround.

Hunstad coached at East Jessamine from 2017-18, and she also has coached club teams.

“It’s the closest thing I can do to playing again. I really enjoy it,” she said.

A 2011 Danville graduate, she played for two different coaches in the early years of the program.

“We never got the coaching staff that I want to give to them, so it is really cool to see that being brought back to Danville,” she said. “Danville has phenomenal athletes, we just have to build on them.”

Toward that end, Hunstad coached the team at John W. Bate Middle School last season and will do so again this year. The middle school program is still in its infancy, and Hunstad said it can be an asset for developing players.

“My hope with that is I can get them as fifth- and sixth-graders and teach them the fundamentals in middle school, so when they get to the high school level they’re ready to work on the higher-level skills and higher-level rotations so we’re not teaching basic skills once they get to high school,” she said.

As for this year’s team, Terrell and Taylor said it was a late August win over Garrard County, a team against which Danville went 0-3 a year ago, that told the Lady Admirals this season would be different from last.

“That was our first win that we really earned in the last two years,” Terrell said.

The Lady Admirals split two regular-season matches with defending district champion Lincoln County, the team they will play Tuesday in a semifinal match.

Their win over Lincoln was part of a six-match winning streak that was followed by a four-match losing streak to close the regular season.

“Recently we’ve been playing a whole lot stronger teams, so I hope that will help us (in the postseason),” Taylor said.

The regular season ended Tuesday, giving the team several days of practice before the district tourney.

“We’re working a lot on communication, on timing, on hitting, and we’re also working on blocking and coverage,” Hunstad said.

At the same time, they’re working on a better future for the program.

“We have a lot of younger players,” Terrell said, “so I think the ceiling’s really high.”