Boyle bounces back, shuts out Anderson 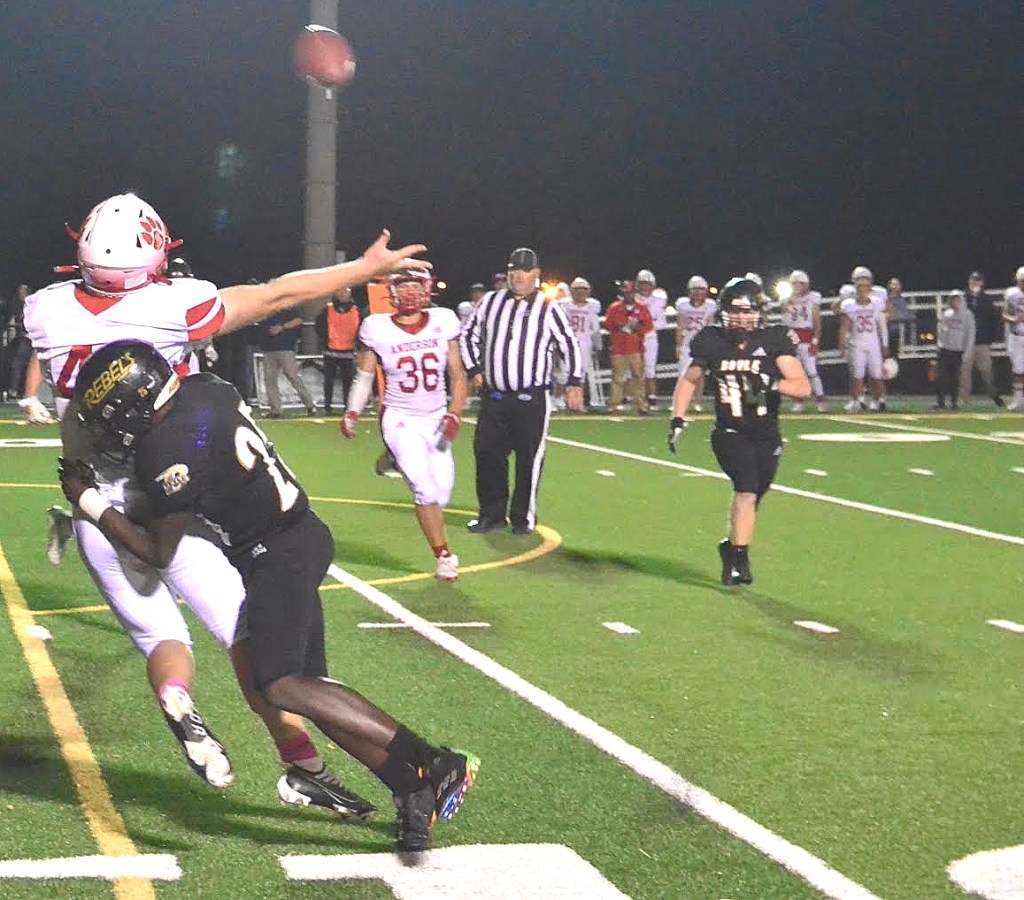 Jaysia Richards (25) of Boyle County hits Anderson County’s Brandon McGregor as he defends a pass during the third quarter Friday.

Boyle County got back in the win column Friday with an easy 36-0 victory over Anderson County. But what happened Monday through Thursday had at least as much to do with how the Rebels bounced back from their loss to Lexington Catholic as their performance Friday night.

The Rebels had a demanding but productive week of practice that culminated with a 36-0 victory at Rebel Stadium as they worked on the things that worked against them a week earlier.

“It was a good week and a hard week. It was a little bit of both,” Boyle running back-linebacker Dalton Stone said. “The coaches were hard on us, but we wanted to come out and we wanted to make each other better and get better as a group.”

Boyle (7-1, 1-1 District 4A-5) certainly had a better Friday as it cruised to its sixth running-clock victory over Anderson in the past four seasons.

There was little doubt that the Rebels remained too much for the Bearcats, even less after the Rebels used five consecutive completed passes to score just over two minutes into the game.

“These games are tough,” Boyle Coach Justin Haddix said. “We didn’t play perfect, but I’ll take it. It’s a win, and it’s good to be winning again.”

Sage Dawson passed for a career-high 305 yards, and he equaled his career-high in completions with 18 in 25 attempts. He completed his first nine passes for 148 yards and was 16 for 20 for 296 yards in the first half.

Ten different receivers had catches for Boyle, which got 305 of its 372 yards through the air thanks to shovel passes, deep balls and everything in between.

It wasn’t a comfortable week of practice for Boyle following the loss to LexCath that was only its second defeat in the past three seasons.

“It was a hard week, and it was getting back to fundamentals,” Haddix said. “You get beat and you’ve got to learn from it, and we’re going to have another good, hard week of practice this week to get better for Bourbon County.”

Stone said the Rebels’ focus last week was entirely on themselves and what they did wrong in the LexCath game.

“Not just this game, but this whole week we really came together as a whole team,” he said. “We set a standard for each other and we focused on making each other better and playing for the guy beside you instead of playing for yourself.”

Stone received the team’s Robert Allen Yankey Memorial Rebel Award before Friday’s game. The award, presented in memory of a standout player who died in 1970 in a drowning accident during his senior season, recognizes qualities including sportsmanship and leadership.

He then had his first three receptions of the season for 36 yards, including a 14-yard touchdown catch on a screen pass that gave Boyle a 21-0 lead in the final minute of the first quarter.

Montavin Quisenberry (95 yards), Jakei Tarter (69) and Christin McGlone (22) also had three catches each for Boyle. Tarter caught a touchdown pass on the opening series, and Will Alexander and Austin Bodner also had TD receptions as the Rebels scored five times in the first 20 minutes to trigger the mercy rule.

Boyle had only 12 rushing plays, eight of them in the second half. Bubby McPherson and John Rahbany led the Rebels with 33 and 23 rushing yards, respectively.