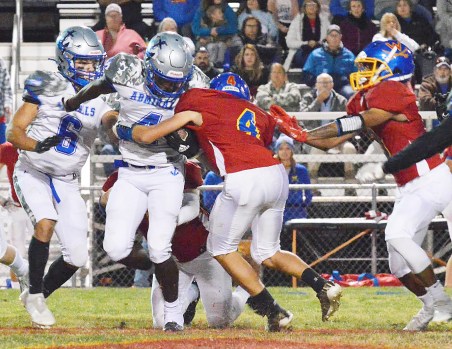 SPRINGFIELD — Coming off a victory in its district opener, Danville crushed Washington 53-7 on Friday at Bennet R. Lewis Field. It was the most points Danville has had in any game in the past five years.

“We challenged them, this was just the next challenge for us,” Danville Coach Mark Peach said. “We were able to secure a home playoff game, and we just talked about how Washington was just kind of standing in the way, so this is the next hurdle for us to try and overcome to get to the next one.”

Danville (4-4, 2-0 District 2A-4) scored seven times in the first half to put up a whopping 46 points and went on to post its highest score since a 57-16 victory over East Ridge in the first round of the 2017 Class 2A playoffs.

The Admirals got off to a fast start as DeMauriah Brown returned a Washington fumble 65 yards for a touchdown just over two minutes into the game.

“We’ve got to come out better prepared,” Washington Coach Eric Sagrecy said. “We turned the ball over on our first drive, and against a good team like that you can’t get behind, against kids like Demauriah who makes a lot of big plays. … They can turn a zero-score game into a three-score game in a hurry, so we can’t allow that to happen.”

The Commanders fumbled again on their next possession of the ball after a sack by Josh Bixler. Chris Grier recovered the ball, leading to another Admiral score when, two plays later, Braiden Baughmen ran 30 yards for a touchdown.

Already leading 20-0, the Admirals scored a touchdown every time they were in possession of the ball in the second quarter. The period began with another Baughman touchdown, this time on a 64-yard run, followed by a 49-yard TD run by Brown.

A 46-yard pass from Brown to Baughman set up a 2-yard touchdown run by Brown, and a 45-yard punt return by Demontrae Trumbo allowed Baughman to close the first half with a 5-yard TD run that gave Danville a 46-0 lead.

Danville’s defense was impenetrable throughout the first half, as the Admirals earned a total of four sacks. Bixler and Paul McClure each had solo sacks, and each shared a sack with Sam Shearer.

Bixler scored the last Danville touchdown on a 3-yard run on the first play of the fourth quarter.

Washington managed one touchdown midway through the final period on a 15-yard run by Nick Smurphat.