Rotarians get inside look at new fire station 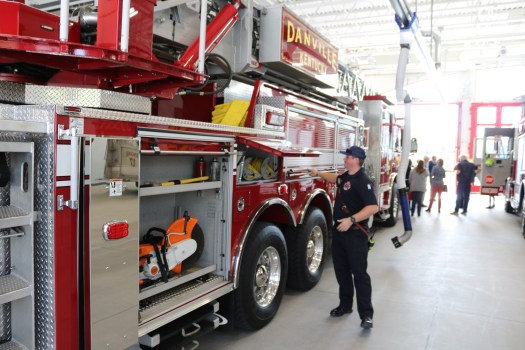 The new Danville fire station has enough space to accomodate future growth in the department. Photo by Lance Gaither 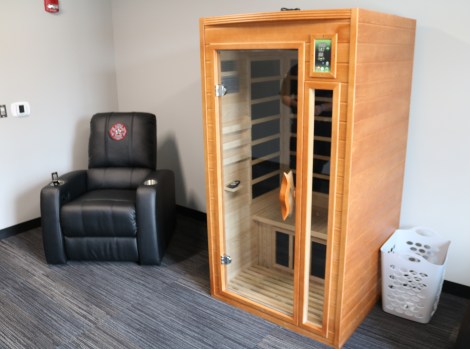 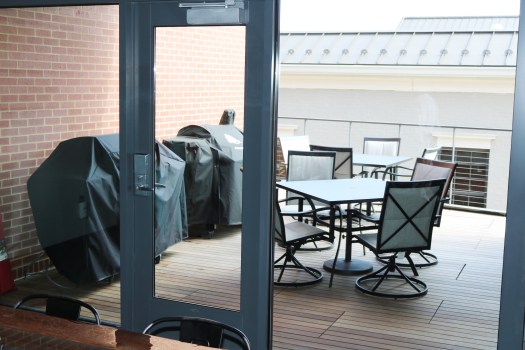 A deck provides firefighters with room to grill meals and enjoy being outside between calls. Photo by Lance Gaither 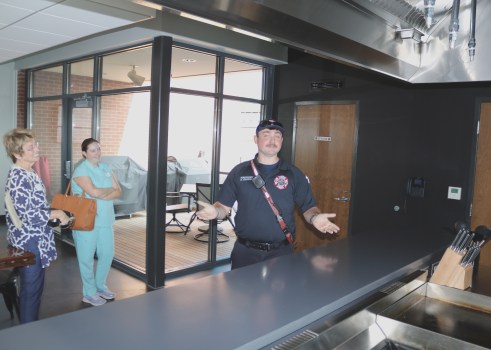 After its official opening last month, the Danville Rotary Club visited the new fire house to take tour of some of its state-of-the-art features. Before the tour, Fire Chief Doug Simpson spoke to the group about some of the difficulties that fire departments across the state are facing, some lesser-known aspects of being a firefighter and some of his memorable stories from his 18 years at the Danville Fire Department.

“One of the main benefits is it’s a safe station, our old station was past the point of being fixed up, it would have cost too much money,” Simpson said. “We have a brand new facility that’s clean, environmentally friendly, and great for our staff. We have a decontamination chamber where they clean themselves if they come into contact with blood, bedbugs, and things of that nature before coming to the living area. We have brand new gear cleaner to wash contaminants off our gear.

“Fifty percent of all firefighter deaths are the result of heart related illness. Cancer is about a 60 percent increase over the general population. Those are the 2 main things we are trying to stay away from.”

One of the biggest advantages of the new station, Simpson said, is location.

“We’re still on Main Street where we wanted to be community partners with everybody. It’s a great area,” he said. “This will also help our response time, our average response time is about 4 minutes and 12 seconds. We cover 17.2 square miles in the city limits. Getting there quick and having early intervention is key especially in situations such as structure fires and cardiac arrest.”

Full-time firefighters are required to be certified in several areas, including licensed car seat technician, and most departments will even help new parents correctly install a car seat.

Two of Simpson’s most memorable moments on the job involved animal rescues. One was a call about a pet stuck in a tree, the other about a dog in an unlikely predicament.

“Some of the services that we do are animal rescues. We mainly get cats in trees,” Simpson said. “We have seen a chihuahua on a roof before. A family went camping for a weekend. They left dog food out for him, but they left a window open. The little chihuahua got out and crawled onto the roof. You don’t see chihuahuas on the roof very often.”

The other was a pet in a tree that is not commonly found in Kentucky.

“A man stopped by and said his pet was stuck in a tree,” Simpson said. “He was very distraught and didn’t elaborate that it was an iguana. It was in the summer so it was hot out. We went to his house and there was an oak tree about 75 feet tall. There was a huge iguana up there. It was about 30 pounds and 5 feet long. You don’t encounter iguanas every day. We have had snakes before in structure fires but never an iguana. We couldn’t reach it with our ladder. The owner put out some cat food and it came down a few hours later. We were stunned when we saw it.”

During the tour of the new station, firefighter Dakota Messinger showcased many of its features. The tour included the kitchen and dining area that, he said, has much more space for cooking and storing food than the previous facility that had a single storage cabinet shared by everyone. The new station has three pantries, so each squad can have their own.  The dining area also features an outdoor deck so that they can grill and enjoy the outdoors between calls.

Messinger also showed off the station’s gym and sauna. He explained that firefighters need to be in peak physical condition not only to perform on the job, but also  because experiencing rapid changes in temperature such as when they enter a burning building is very difficult for the human body to endure. New research is showing firefighters are at far higher cancer risk because in part of exposure to fumes and gases created by burning plastics and other materials. He said that fumes from house fires are so toxic that a single inhalation of the smoke can be deadly. Likewise, residue on the skin and in pores also is harmful, which is why sweating from exercise and time in the sauna is crucial for removing toxins.

The new station has been built with future use in mind. The current locker rooms and shower area are far larger than the station currently needs, but Messinger said that the station will be used for the next half-century, the size allows for growth. The station also has technology, such as motion-activated lights to save energy and a weight-activated fire pole to help prevent falls.

“Some of the big features here are the safety features,” Simpson said. “We have a sprinkler system here and the old station didn’t. We have millions of dollars of equipment in the bay but the most important commodity is our staff. In case anything happens we can get out. It’s key to have a good safe place for your staff to sleep at night.”