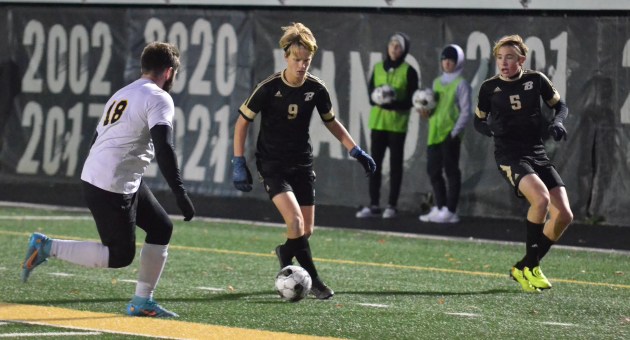 Alan Wireman (9) of Boyle County pushes the ball forward as teammate Bo Little (5) looks on and Johnson Central’s 18 moves in during the first half Tuesday. Photo by Mike Marsee 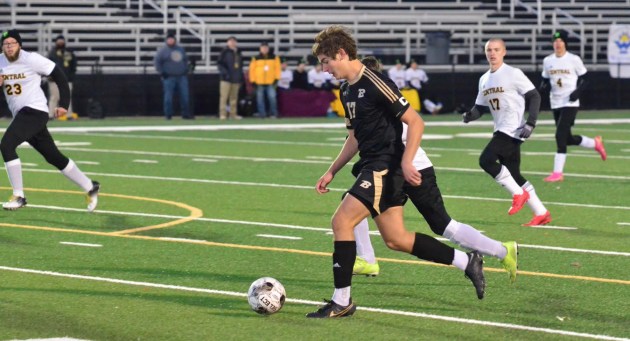 Tristan Compton of Boyle County pushes the ball forward during the first half Tuesday. Photo by Mike Marsee 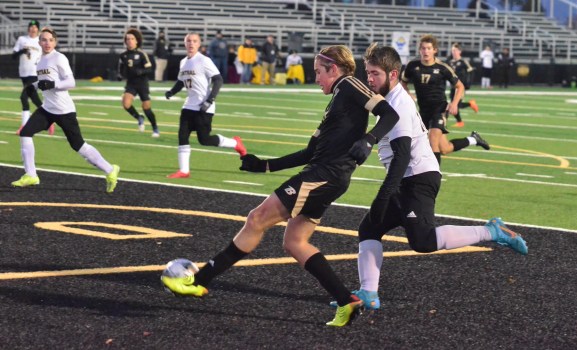 Bo Little, front, of Boyle County passes the ball after getting past Johnson Central’s 18 during the first half Tuesday. Photo by Mike Marsee 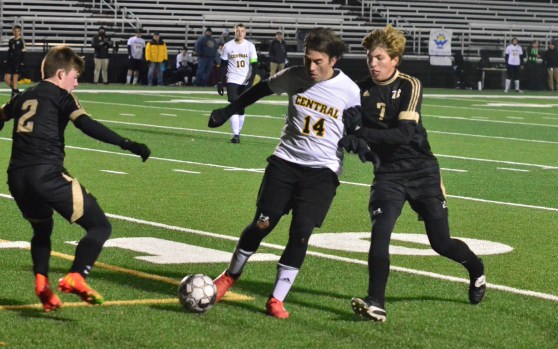 Micah Brown (2) and Jack Little (7) of Boyle County try to take the ball from Johnson Central’s 14 during the first half Tuesday. Photo by Mike Marsee

It wasn’t exactly a night off for the defense, but it was the next best thing as the ball stayed on one end of the field for almost all of Boyle’s 8-0 victory over Johnson Central in a first-round game at Rebel Stadium.

The unit that played a significant role in the Rebels’ return to the boys state soccer tournament had little more to do Tuesday night than push the ball back into the offensive end as Boyle rolled into the second round.

“We had a nice defensive night,” Boyle midfielder Matthew Britt said. “Our keeper only touched the ball, like, three or four times the whole game. Our center backs did a great job of winning those balls out of the air, and we really can’t ask for much more.”

Boyle has allowed only one goal in six postseason games, and its latest shutout was its school-record 13th of the season.

This shutout came easy for the defense, as the ball remained on the Rebels’ offensive end for most of the game.

“The other team was really sitting deep and concerned with our attack, I believe, and it really made their job easier, but they did their job and kept the shutout,” Boyle Coach David Ritchie said.

Boyle (19-4-2) has won more games than all but one team in program history — the 2005 team had 21 wins — and has advanced to the quarterfinals for the fourth time in six state tournament appearances.

The Rebels will host Ryle, which knocked them out in the 2020 quarters, at 7 p.m. Saturday.

“It’s a highly anticipated rematch for us. We’re ready for revenge,” Britt said.

Britt and Jaxon Pool scored two goals each for Boyle, which had the largest margin of victory in the eight first-round games.

The Rebels began imposing their will on Johnson (14-8-1) from the start, moving deep into the Eagles’ end of the field for three shots from close range in the first five minutes.

“We just have to come out (with) 100 percent energy. … When we do we get those early goals that give us the momentum,” Britt said.

Britt scored Boyle’s first two goals in the 12th and 27th minutes off assists from Jack Little and Bo Little.

Tristan Compton scored from 15 yards off a Bo Little assist in the 35th minute to give the Rebels a 3-0 halftime lead.

“We were doing a very good job of possessing the ball and not forcing it because they were sitting deep,” Ritchie said. “It would’ve been easy to just try and dump it because of the way they were playing, but the guys handled it well and possessed well.”

The Rebels are looking forward to a rematch with Ryle, which defeated them 4-1 in the quarterfinals in their most recent state tournament appearance two years ago.

“It was a very even game. Now we have about the same team and we’re all older and stronger, so we’re looking to give them what they gave us two years ago,” Britt said.

Ryle (18-4-2), the 9th Region champion, defeated Montgomery County 1-0 in its first-round game Tuesday and has been scored on only twice in six postseason games.