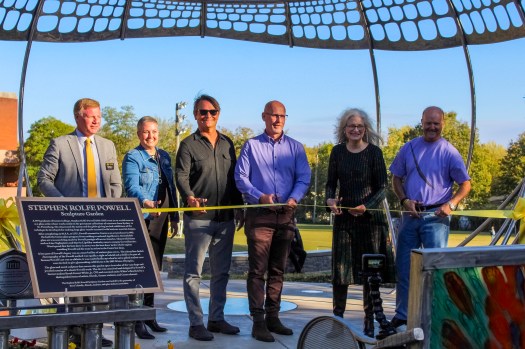 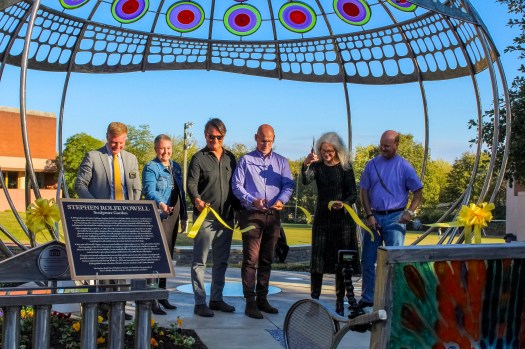 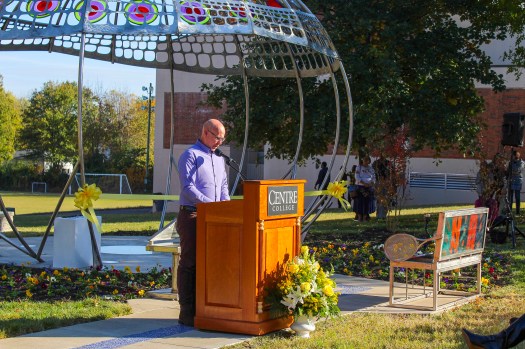 Brooke White, a protege of Powell and designer of the memorial garden, speaks about the process to create the sculpture memorial. photo by Fiona Morgan 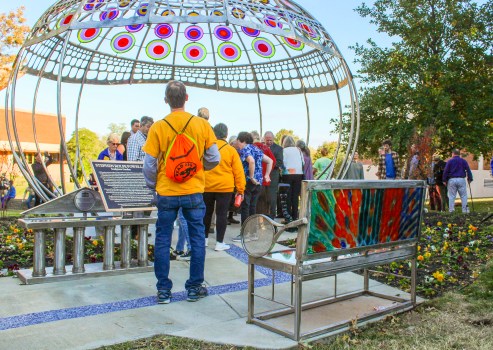 In front of the sculpture people can sit on a bench of colors inspired by Powell art, with armrests of tennis rackets, which was Powell’s sport of choice. photo by Fiona Morgan 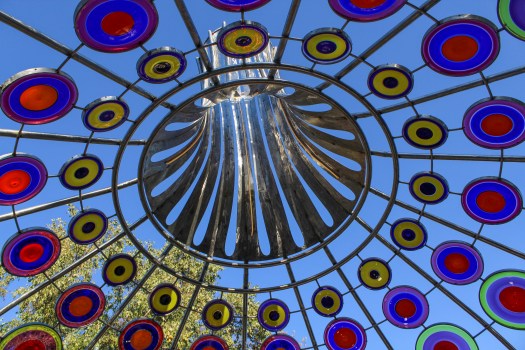 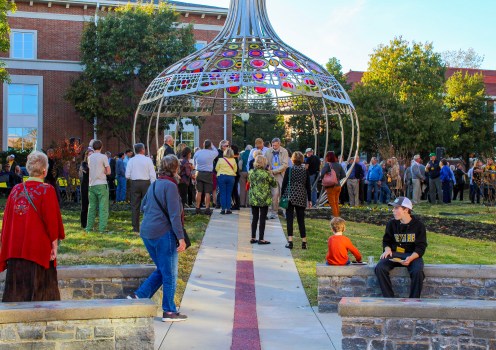 View of the sculpture from the outdoor classroom. Each walkway features strips with little pieces of colored glass. photo by Fiona Morgan 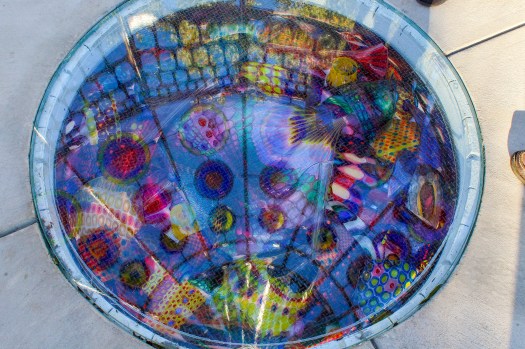 Walking through the middle of the sculpture, people can see pieces of Powell glass that broke. photo by Fiona Morgan 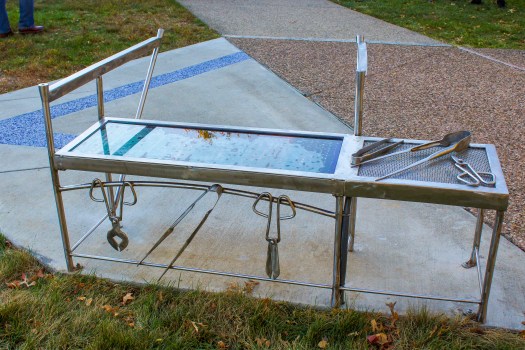 The memorial park features a creatively-designed bench that has glass maker tools and a colorful, lit-up top. photo by Fiona Morgan 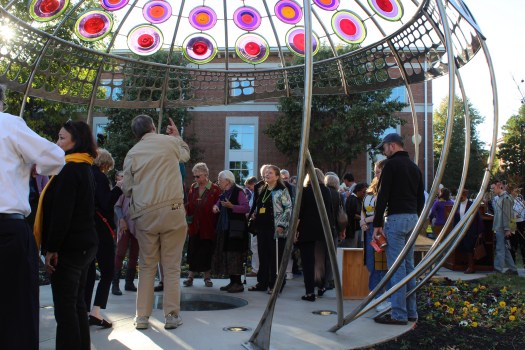 People enjoyed gazing up at the colorful glass. 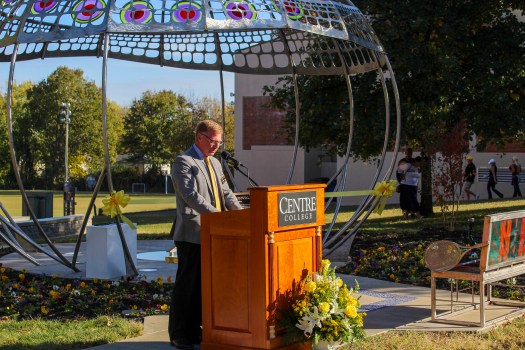 Stephen Rolfe Powell was an internationally acclaimed glass artist who taught at Centre College for 30 years. He died in 2019.

The memorial is next to the Norton Center for the Arts, and features a 25-foot-tall sculpture in the shape of a glass vase. Spectators can walk through and up at colorful discs illuminated by sunlight, and by ground lights at night.

Centre President Milton Moreland thanked the many people who were involved in the design and implementation, and the donors who made it possible.

“I am very excited at the inspiration this brings to our campus; this is the type of artistic rendition that will always have a purpose, and will always serve our students, faculty and staff in ways that we can’t even imagine right now through this beautiful sculpture and the garden, and the opportunity for an outdoor classroom,” said Moreland.

Centre alumni and close friend of Powell’s, Brook White had the idea for the project, and led the design and implementation of it. He wanted something for everyone to remember Powell, as he made a difference in many students’ lives.

“Powell made a difference in our lives by sharing himself, his talents, his humor, his time and vitality. After interacting with Steve you might have thought that he helped rebuild something inside you that you might not have realized about yourself,” White said.

White said the project took over two years and many people’s help to come together.

Artist Dave Caudill and a team constructed the full 25-foot-tall and 20-foot-wide stainless steel frame in a Louisville warehouse. White said it took two months to find a building tall enough to construct it in.

The time came this summer to move it to Danville. However, the door to the warehouse was only 16 by 16 feet. They decided to take the top part of the sculpture off and, with several forklifts, just narrowly fit it through the door.

In transporting it, they had six escorts leading the way over four hours from Louisville to Danville. White said they kept having to stop to push up cables and power lines. When they got closer to Danville, it became a 13 car convoy. When they arrived, it took a huge crane to put the sculpture in place.

“It was very much a Steve project, he would’ve loved the adventure,” White said.

The entrance to the garden features a creatively-designed bench with glass-blowing tools, and a colorful, light-up top. Each walkway has strips of different colored glass shards. In front of the sculpture is another colorful bench with tennis rackets for armrests. Tennis was Powell’s favorite sport.

The garden around the sculpture features pansies planted by Danville’s garden club. In the middle of the sculpture in the ground, people can see broken shards of Powell’s glass pieces.

The walkway leads to an outdoor classroom, and on the benches are more colorful circles of glass pieces. Other former students who helped create the sculpture and benches include artists Paul Nelson ’92 and Paul Hugues ’92.

White thanked everyone involved in the process. He ended by saying the sculpture is named Soaring Renegade Peacock, a tribute to how Powell named many of his wildly colorful pieces.