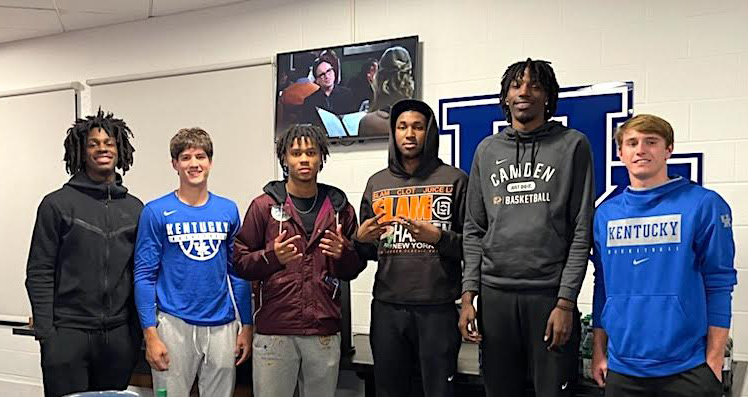 It was about seven months ago that I asked Krysten Peek, a national basketball/recruiting writer for both Yahoo Sports and Rivals, if Kentucky’s loss to Saint Peter’s in the NCAA Tournament a year after a 9-16 season was going to impact John Calipari’s recruiting.

“There’s a lot of pressure to do something next year with the class coming in with the way the last two seasons ended,” Peek said. “The fact remains the same; coach Cal gets players to the NBA.

“Most high-level recruits have dreams of playing at the highest level and Calipari has an incredible track record getting players there.”

Calipari does and Peek was exactly right about the first-round NCAA tourney loss having no impact on Kentucky’s recruiting because the Cats are on the verge of a mega recruiting class.

The most recent addition is 7-footer Aaron Bradshaw of Camden, N.J. He announced his verbal commitment to UK a few hours before Big Blue Madness on Friday. He was in Lexington for Madness along with UK commits Justin Edwards of Philadelphia and Reed Sheppard of North Laurel. Another commit, Robert Dillingham, could not attend.

Another visitor at Big Blue Madness was Bradshaw’s high school teammate, DJ Wagner. He’s a consensus top three player in the 2023 recruiting class and it’s going to be a shock if he does not pick UK, especially after his recent NIL deal with Nike.

Want more? Ian Jackson, ESPN’s No. 2 player in the 2024 recruiting class, was on campus. He attends Cardinal Hayes High School in Bronx, N.Y. — the same school where former UK All-American Jamal Mashburn played. He has said UK is his “dream school” numerous times.

In-state star Travis Perry of Lyon County, who is in position to become the all-time leading scorer in Kentucky high school basketball history, was the sixth recruit at Madness. He told me he had a “great time” at the event.

And don’t forget that Kentucky added 6-11 Ugonna Kingsley Onyenso in late July when he reclassified to the 2022 recruiting class. Onyenso, 17, is a five-star player ranked in the top 20 in the 2022 class but is expected to be a role player this year behind Oscar Tshiebwe and basically is getting a head start on the 2023-24 season.

That means Kentucky’s 2023 recruiting class will have Edwards, Bradshaw, Dillingham, Sheppard and Onyenso and probably Wagner. That’s a big-time player at every position and back to the way Calipari was recruiting the high school ranks when he first got to Kentucky in 2009.

If Wagner picks UK, the Cats would have three of the nation’s top five players in the 2023 recruiting class with him, Bradshaw and Edwards and another player — Dillingham — either in the top 10 or on the verge of the top 10. That’s a mega class when you add Sheppard and Onyenso.

Calipari’s recruiting magic obviously is just as strong as ever like Peek predicted it would be only a few weeks after the Saint Peter’s loss. Calipari has also seemed rejuvenated on the recruiting trail and this is year two for assistants Orlando Antigua and Chin Coleman to be on Calipari’s staff. That has helped but the draw remains putting players in the NBA.

“Elite players want to win championships,” Peek said seven months ago. “But elite players also dream of playing in the NBA after college and want a coach who can get them to that level. They know Cal gets players to the NBA and that is what resonates the most with them and that won’t change.”