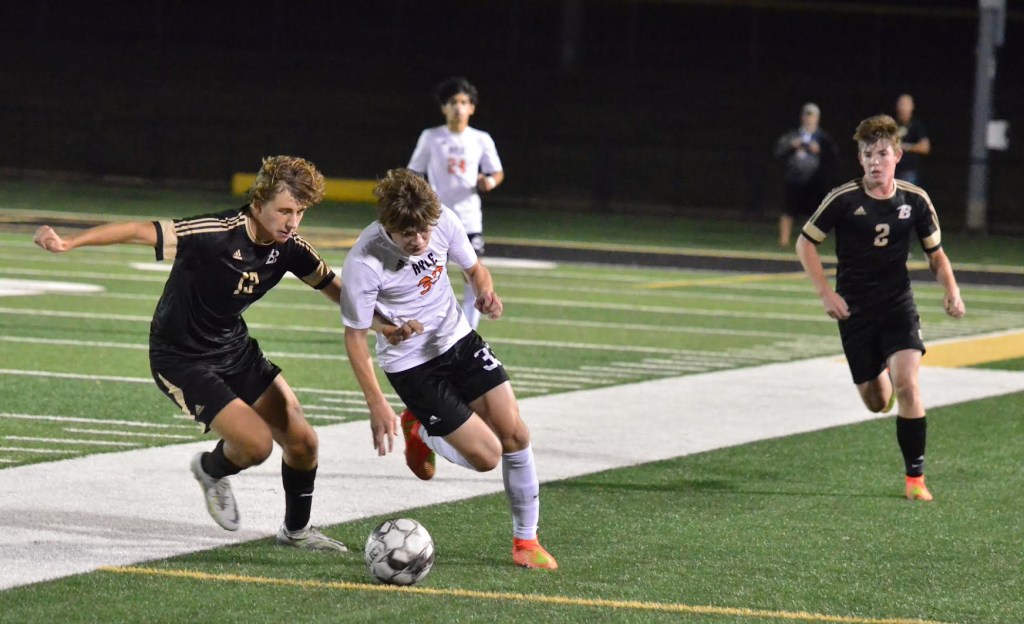 Andrew Carr, left, of Boyle County tries to stop an advance by Ryle’s Brice Denigan as Boyle’s Micah Brown moves in during the first half Saturday. Photo by Mike Marsee

When Boyle County had a shot at the final four, it didn’t have enough shots to get there.

Ryle restricted the Rebels to only a handful of shots Saturday night as Boyle fell 1-0 in a boys state soccer tournament quarterfinal at Rebel Stadium.

The Rebels seldom got so much as a good look at the goal as the Raiders eliminated them in the round of eight for the second time in the past three seasons.

“Shoot, Ryle definitely had one (of the best) or the best defense we’ve played this season,” Boyle forward Tristan Compton said. “They’re a really good team, and we tried our hardest out there tonight.”

Ryle (19-4-2) scored the only goal it would need early in the second half to advance to the semifinals and end a season that saw Boyle (19-5-2) reach the second-highest win total in program history.

Quality scoring chances were at a premium for both teams in a battle of defensive stalwarts. The Raiders got 10 shots on goal, while the Rebels had only four after getting 20 in their first-round victory over Johnson Central.

Boyle coach David Ritchie said he prepared his players for a defense that was better than any they had faced this season, and he said the Raiders had exactly that.

“They did a very good job of keeping their shape, they played on three different levels with that back line, they won the balls into the strikers better than anyone we’ve played all year. Our strikers couldn’t even get that first touch on it,” Ritchie said.

Compton, whose 32 goals this season place him among the top 20 scorers in the state, said Ryle’s communication was the key to cutting off the Boyle offense.

“I’d say it was definitely the communication and stability of their defense,” he said. “They communicated very well and they held their line very well, and we just had a hard time penetrating it.”

On the other end of the field, Boyle’s defense and goalkeeper McClain Denny rose to the occasion to keep the Rebels in the game.

“They were a dangerous team. They possessed the ball well. And our back line, they played phenomenal for 80 minutes. I could not ask for any more from them,” Ritchie said.

Ryle broke the deadlock 35 seconds into the second half when Brice Denigan moved the ball from the right corner into the box, then fired it past a defender and Denny and into the right side of the net.

Denny kept the Raiders from expanding their lead over the next six minutes, first when he deflected a shot into the crossbar and then with two saves seconds apart.

“He played an outstanding game tonight. He had a lot of nice saves, and I’m very grateful for him,” Compton said.

Even so, it was the end of the road for a Boyle team that won more games than it had since going 21-4 in 2005 and captured its sixth regional championship.

The team’s five seniors won two regional titles and were regional runners-up once during four years of transition in which they went 53-30-6 under four different coaches.

“I’m definitely proud of our team over these last years, and I hope they continue to work hard,” said Compton, who was named to the all-state tournament team.

Ritchie said he is proud of his seniors and excited about those who will return.

“You’d be hard-pressed to see a group of seniors through four years that have done as much for a program as they have,” Ritchie said. “It hurts for a little bit, but when you look back, they’ve had a great high school career. … And the returning players we have, I’d say there’s no reason we can’t be back here next year.”