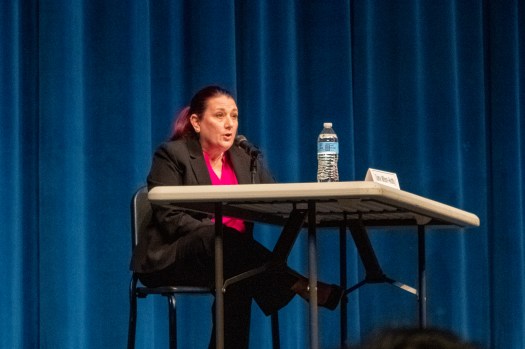 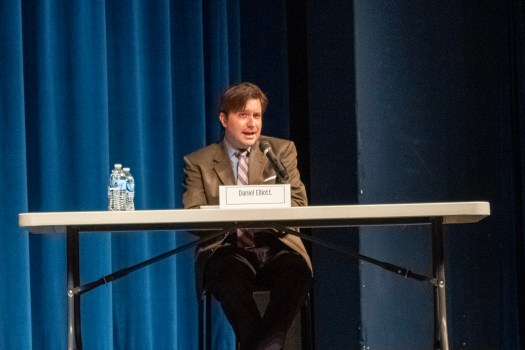 Candidates for state representative for Boyle and Casey Counties answered questions from the public at a forum last Tuesday. The candidates are Democrat Elaine Wilson-Reddy and Republican Daniel Elliott, the incumbent representative.

Wilson-Reddy is a professional educator and law school graduate. She spoke on the need for more diversity of thought in the House of Representatives, and the need for working together.

“For too long, party loyalty and divide have been the priority over the greater needs of the people,” Wilson-Reddy said. “We know that there’s a feeling of urgency in our country and in our state, and we know that it’s time for a change. I seek to bring consideration and respect back to the legislative process, in order to come to a viable solution for all Kentucky citizens no matter party affiliation.”

She continued, “Not only do I possess the unique legal perspective on the legal process, but as a professional educator, I have also matched with the ability to break complex concepts down so that everyone can understand them, which translates into government transparency for all of my constituents. I will listen and consider all sides of an issue, and not just vote along party lines, as my opponent has done throughout his entire legislative terms.”

Elliott has been representative for six years. He said he was recently named by the Council of State Governments as one of the top 20 state government officials in America under 40 years old.

“Public service is what this is about for me, public service is one of the most significant and worthwhile professions in our society,” Elliott said. “I listen more than I speak.”

“I will pledge to continue to be an effective voice for you by serving in the majority of 75 republicans in Frankfort,” Elliott said. “I’ll be part of that robust majority in the house, where I’ll be able to set the agenda for you. A minority member in the House of Representatives, one of 25 [democrats], will have absolutely no say or input on committees that that person serves on, and probably won’t even get a bill voted on, honestly, and would be a very ineffective member of the legislature from this area.”

Elliott said one of the most important issues that the state government should address is tax reform. He said they have had an antiquated tax system for a long time, but have started addressing the issue by passing a law to phase out the income tax. They will begin to tax consumption rather than income and production, like many surrounding states.

Elliott said another issue is the pension system, as the actuarial required contribution wasn’t funded properly. He said the state should look at cost of living increases for retired state employees.

Wilson-Reddy agreed on the issue of antiquated taxes.

She addressed Elliott’s comment that a democrat from this district would not be effective in legislation, by saying that everyone deserves a voice.

Candidates were asked whether they support legalization of recreational marijuana and/or medical marijuana.

Wilson-Reddy said she is in favor of fully legalizing marijuana, but at the very least medical marijuana. She explained that Illinois saw $424 million from marijuana revenue in 2021, and if that’s suggested to the population of Kentucky, it could increase revenue by up to $150 million per year.

She pointed out that studies have proven how effective medical marijuana is in treating issues like chemo-induced nausea, glaucoma, and other things. She said she heard about someone from Casey County having to travel out of state to get the cannabis oil they need for pain relief.

“Marijuana I think leads to hard drugs, but some states have obviously decided that that’s the best way to go about generating revenue to legalize recreational use of it,” Elliott said.

However, he has supported medical marijuana in the legislature. Elliott co-sponsored a medical marijuana bill twice, and voted in favor of it against other republican members. The bill died down in the senate.

“I agree with Governor Beshear that if we do adopt medical marijuana, we need to apply a sales tax to it at some point in the transaction process, and I think that will be a revenue-generator for Kentucky,” Elliott said. “My party in the house doesn’t agree with taxing this because it’s a medication, but it needs to be tightly regulated.”

Another question asked candidates whether they would support exceptions to the state’s ban on abortion for victims of rape, incest, or when the mother’s life is at risk.

Elliott said he is a pro-life candidate. He mentioned that the people will vote on an amendment to the Kentucky constitution to determine whether the right to abortion is protected. He said the general assembly will have a discussion depending on how the amendment vote turns out.

He said that only a smaller number of abortions involve life of the mother, rape or incest.

“Rape and incest are criminal acts against a woman, and I think it’s very likely that … there will be some exceptions in our state law, but I do not support the Roe v. Wade wide-open framework of an abortion-on-demand society.”

Wilson-Reddy said the abortion debate is more about women’s freedom and privacy.

“The question asked about women’s reproductive rights, the Dobbs decision, which is the basis for overturning Roe, is about a woman’s right to privacy,” Wilson-Reddy said. “If we erode this right to privacy, what other areas of privacy will also be denied?”

She continued, “Lawyers are deciding if a woman can have life-saving surgery in the event of an ectopic pregnancy; if a doctor can perform a D&C if a woman miscarries; or if a woman can have a D&E when a fetus is not viable and the life of a mother is in danger,” she said. “Why are lawyers and lawmakers making these decisions?”

Wilson-Reddy brought up the results of a Northern Kentucky Right to Life candidate survey, which shows that all current northern Kentucky republican candidates are in favor of restricting access to all forms of medical birth control. She said that includes medicines for endometriosis and polycystic ovarian syndrome.

“I am 100% for women’s right to privacy, their right against discrimination, and their right to make medical decisions for themselves,” she said. “There is no room for the government in any patient exam room.”

Another question brought up the fact that state employees were given a raise across the board this year, except school teachers. Candidates were asked whether they would support using the current budget surplus to give teachers raises.

Wilson-Reddy said that it would take an average of $1.8 million to give all Kentucky educators an 8% raise, which is the same amount that state employees received. This is less than 1% of the current budget surplus.

“The general assembly had the power and the funding to give our professional educators raises; not only did they explicitly refuse to give our teachers raises, they gave themselves a raise, for their part-time jobs for which they will make more than the average school teacher in our state,” Wilson-Reddy said.

Elliot said that most local school districts in Kentucky gave teachers a raise this year, including Boyle County which gave a 5% increase to all employees. He pointed out that the average teacher in Kentucky makes more than in Indiana, Tennessee or Missouri.

“We’re 36 out of 50, which is not the best and we can do better, but we’re also not the worst,” Elliott said. “If a budget is ever presented to me in the general assembly with a mandated increase for teacher pay, I will support that; but I do believe that leaving those decisions up to the local school districts and their school boards is the best practice, because those school boards know what they can afford.”

Other questions involved candidates’ views on charter schools; creating a more direct route from Highway 34 to Interstate 75; completing the east end Danville bypass for better access from Highway 150 to 34; a state-wide fairness ordinance; and sports betting.

Elliot said he voted no on legalizing sports betting because he believes it should be in the form of a constitutional amendment where voters decide.

Wilson-Reddy said she is in support of legalizing sports betting. She said they must continue supporting the horse-racing industry, but that many of the same people who go out of state for sports betting are the same ones also betting on horses in Kentucky.

To watch the full forum, go to the Hometown Live Radio Youtube page.