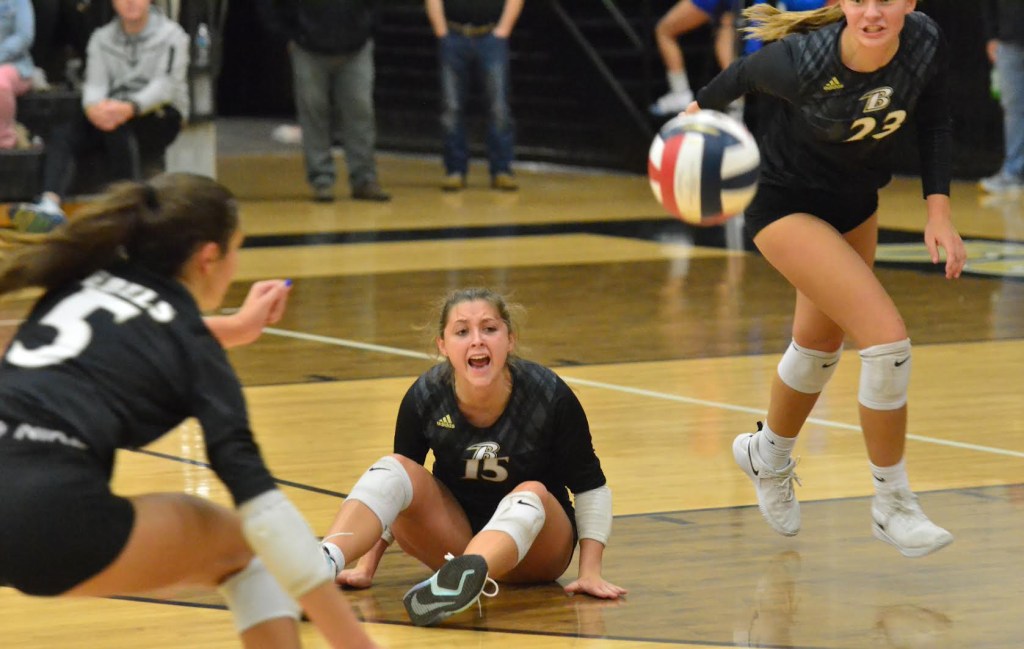 Camryn Thompson, center, urges Boyle County teammates Kendra Christopher, left, and Havannah Maddox on as they attempt to chase down a ball Thompson played during the third set Wednesday. Photo by Mike Marsee

It was the end for Boyle County, but was it also a beginning?

The curtain came down on Boyle’s most successful volleyball season in recent years Wednesday night as the Lady Rebels fell to West Jessamine in the semifinals of the 12th Region Tournament at Boyle.

Their 3-0 loss was no surprise — Boyle figured to be overmatched against three-time defending champion West Jessamine — but the smaller, younger Lady Rebels produced some stretches of strong play that could plant the seeds for further growth in the program.

“Really, they all need to walk away with the confidence that we just competed against one of the top teams in the state, and we hung in there,” Boyle coach Eric Kenoyer said.

Boyle (21-17), which hadn’t won a regional tournament match in five years before rallying to defeat Somerset Christian 3-2 in the first round Monday, strung some runs together during each set and finished its season with strong play in the third set even after the match was out of reach.

“Where we’re not big, we have to fight for every point. We can’t let up at all, we can’t back down. And they stepped up and did what I asked of them, and I couldn’t be more proud of them,” Kenoyer said.

The outcome of the match was obvious when Boyle fell behind 15-1 in the third set, but the Lady Rebels weren’t about to roll over.

They outscored West Jessamine 9-1 to pull within 16-10 before hitting the wall again and falling behind 23-12. Then they dug in once more, scoring five of the next six points before the Colts closed out a 25-17 win.

It had no bearing on the result, but Kenoyer said the successes they had late in the match could propel them into the offseason.

“To be able to compete like that, we’ve just got to keep building on it,” he said. “Hopefully everybody will continue to buy into what we’re doing and we’ll continue to grow from it.”

Kenoyer said West Jessamine (24-14) is easily the best team Boyle has played this season. The Colts had a clear edge not only in height but also in skill and depth.

Still, the first set was tied at 11-all before West Jessamine scored eight of the next 12 points and went on to win 25-18.

Kenoyer said he was proud of the Lady Rebels’ effort, and he said there was a lot to like about the way they played during their runs.

“I loved how we covered the floor, (and) we weren’t backing down from some of their hard hits,” he said. “When we stayed in system, it was a great game. We got out of system too many times.”

Boyle will lose only two seniors from a team that posted its first winning record since 2015 and won its first district title since 2017.

There are more players in the program than there have been in at least 10 years, and interest is running high among younger players as well. A group of girls who figure prominently in the program’s future became a fixture behind the Boyle bench this season.

“We’ve really put a lot of effort into building the excitement around volleyball between academies and camps. Our boosters have stepped up to make sure we have kids at the games, and they’re our junior managers,” Kenoyer said.

“We’re trying to get this program to where some of the other programs are here at Boyle County. … We’ve got a lot of work to do, but hopefully we’re doing the right things with the younger kids and filling that pipeline.”

Boyle was the only area team to reach the regional semifinals. Danville and Mercer County lost 3-0 decisions to Pulaski County and Southwestern, respectively, in the first round.

Jai Maria Piazza of Mercer was a first-team selection on the coaches’ all-12th Region team that was recognized Wednesday. Kendra Christopher of Boyle was named to the second team.