Mayoral candidates speak on the issues 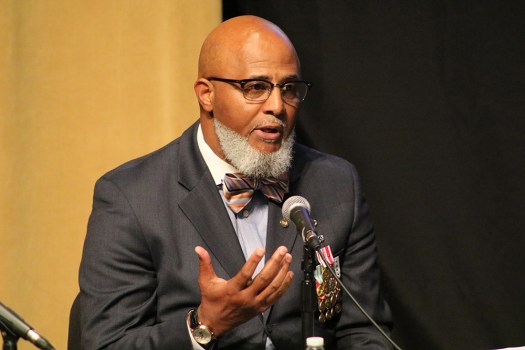 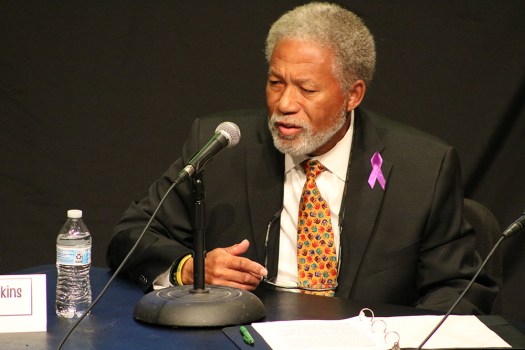 On Tuesday night, a forum organized by the Danville-Boyle County Chamber of Commerce and Centre College and hosted at Centre’s Norton Centre for the Arts allowed mayoral candidates James Hunn and James “J.H.” Atkins to discuss key issues about Danville. Watch the full forum here.

The first question was one created by Centre College students and asked if they would be willing to make a pledge to be available via electronic communication, and avoid discriminatory language and policies. Both candidates accepted and made the pledge.

The second question was how the candidates would ensure that city elections in Danville remain non-partisan.

“It boils down to us respecting each other,” said Hunn “Our races here in Danville are non-partisan, but we still come from the two parties. . . Shame on us if we can’t come together and work together. . . It doesn’t matter to me if you’re a republican, democrat or independent. We have an obligation to make sure we are working for the betterment of all our citizens.”

“This is my seventh election,” said Atkins “Some may say James ‘J.H.’ Atkins is a role model of non-partisan elections in this community. Unfortunately we are dealing with politics and we have candidates running for the first time. Unlike Mr. Hunn, they have probably not taken my city’s 101 class. If they did they would know to how to properly conduct a local campaign that would be deemed non-partisan by all citizens in this town.”

The third question asked was why each candidate is seeking the position of mayor, and what they think are the three most important issues that Danville is facing and their solutions.

Atkins is running for mayor because of the support he has received from the community in his time as an elected official. He believes the major issues facing the community are lack of childcare, housing and homelessness, and drug use. His solution is to bring all organizations who are working on these issues separately together so that a joint effort solution can be made.

Hunn was inspired to run for mayor after seeing an increase in division in the community compared to his childhood after he returned from the Air Force. He believes that workforce development, homelessness and addiction are the biggest issues in Danville. He said that focusing on a creating a skilled workforce to fill the 1,500 job openings in Danville is crucial to having strong economic development. In regards to addiction and homelessness, he cited his work with non-profit and charity organizations as giving him experience with these issues and that community has an obligation to help those who are struggling.

They were also asked about infrastructure and economic development in Boyle County, the role government should play in that development.

“The Mayor is just one vote so it would take the whole commission to have an economic plan for that discussion,” Hunn said, “I’m still concerned about the 1500 jobs in Boyle County. . .Not all of our kids are going to college. What can we do as a community to work with our schools and manufactures to develop these kids to come into these jobs that are already available?”

Hunn also thinks increasing housing availability and tourism are ways to improve the economy in the city and county, He thinks working to increase awareness about the various historical locations throughout Boyle County would be a benefit to Danville’s economy. He ultimately believes growth and development are important, but that government shouldn’t play a large role in developing the economy.  He is firmly against expanding the city limits of Danville.

Atkins is in favor of the city’s continued support of downtown tourism and believes Danville’s new community liaison position will benefit tourism. He is in favor of collaboration between city and county governments, as well as between government and private entities for improving the economy in Boyle County and Danville. He is open to the idea of expanding city limits, but believes that if it is done it should be based on community input.