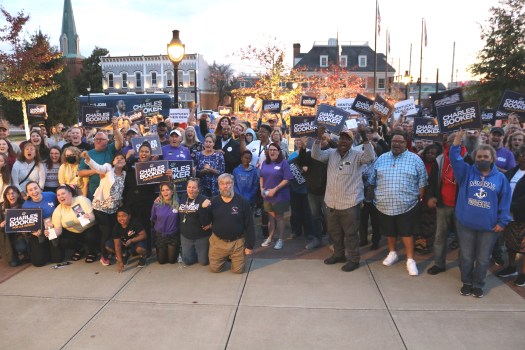 An enthusiastic crowd of supporters were on hand to greet Charles Booker, who is running for one of Kentucky’s two U.S. Senate seats. Photo by Lance Gaither 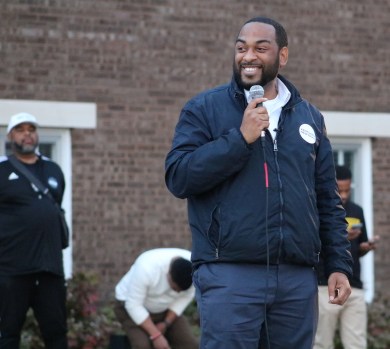 On Monday, a crowd of nearly 150 people gathered outside the Boyle County Courthouse to listen to democratic U.S. Senate candidate Charles Booker. It was the final stop of the day for Booker’s tour throughout the state.

“You deserve a senator who cares about you, that makes sure you have quality health care, that will invest to improve infrastructure all over Kentucky, and work to end poverty rather than profit from it,” Booker said.

He spoke in favor of abortion rights and is firmly against Amendment 2 to the Kentucky Constitution, which would ban abortion in the state.

Booker saidin his speech that he is confident he will be able to beat incumbent Sen. Rand Paul, but that high voter turnout is key.

“Our biggest obstacle is cynicism,” said Booker, “When I look at this crowd I know you are pushing through it and setting the doubt aside. Kentucky deserves more.”

Booker said he did not expect to see such a large crowd of supporters in Danville.

“I’m humbled by the support,” he said. “This was incredible to have such a large crowd here. Part of the story we are trying to tell is that in a lot of the communities that have been ignored for so long there are so many hardworking folks who are ready for change. The crowd tonight is proof of that.”