Douglass flips the script in 37-6 win over Boyle 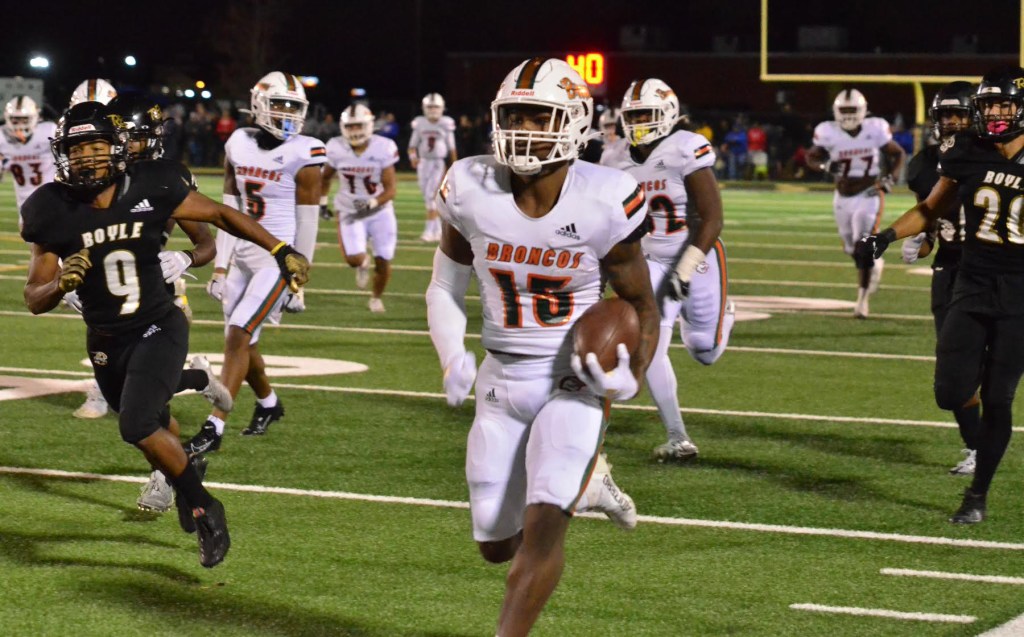 Frederick Douglass made its statement Friday night at Boyle County, dealing the Rebels an atypical defeat that left them smarting as they shifted their focus to the postseason.

The Broncos’ 37-6 victory was a shock to the system to Boyle and its fans, who hadn’t seen such a lopsided loss at Rebel Stadium in 17 years.

And it was in many respects a mirror image of Boyle’s 34-7 win last season in Lexington, when the Rebels had the Broncos on the ropes in the first half.

Douglass scored 96 seconds into the game and led 16-0 early in the second quarter in a marquee matchup between the No. 1-ranked team in Class 5A and the No. 2 team in 4A on the final Friday of the regular season before a standing-room only crowd.

“We got in a hole. It’s tough when you’re playing a good team if you’re not ready to go,” Boyle coach Justin Haddix said. “We went three-and-out, we gave up a big, long run, there were some things we missed on. They’re a really good football team, and we knew that before (the game).”

Boyle has lost only six times in the past six seasons, and only twice at home. This was the largest margin of defeat for the Rebels since 2016, when they lost two games by 31 points each, and it was their worst defeat at home since a 48-13 loss to Henry Clay on Aug. 26, 2005.

“I still think we have a team that can compete for a state championship, and that’s what you want,” Haddix said. “You play these tough games to see where you’re at and what you need to work on.”

Boyle (8-2) suffered a significant loss within the game as well, as quarterback Sage Dawson was sidelined in the second quarter with an injury to his right knee.

The severity of Dawson’s injury wasn’t immediately known, but Haddix said he doesn’t expect the junior to play this Friday when the Rebels host Rowan County in the first round of the Class 4A playoffs.

“We hope nothing’s wrong with him, but he’s going to be out, I feel like, for a little bit,” Haddix said.

Dawson, who also plays cornerback, twisted his leg while trying to tackle Douglass’ Tate Johnson on a 40-yard touchdown catch on the first play of the second period.

“I went to go tackle him and we rolled and first he cleated me, and then whenever we went on the ground and made contact we got twisted up and my knee popped,” Dawson said.

Avery Bodner, a running back-safety who missed the previous two games with an ankle injury, stepped in at quarterback and completed 11 of 17 passes for 92 yards and rushed five times for 30 yards.

Bodner had last played quarterback as a freshman, when he went 1 for 2 at the varsity level and played the position a bit more in junior varsity games.

“We weren’t really going to play him a whole lot … but he stepped up and did what you want a leader to do for you,” Haddix said. “He played great for as many reps as he’s gotten in practice.”

In perhaps the most notable reversal from last season, Douglass (10-0) dominated the line of scrimmage, as Boyle was unable to run the ball and unable to stop the run.

Douglass rushed for 233 of its 357 yards and held Boyle to 54 rushing yards, which was effectively a season low — the Rebels had 53 yards on only 12 attempts in their rout of Anderson County — as well as season lows in total offensive yards (170) and points.

A year ago, the Rebels ran for a season-high 279 yards and the Broncos had a season-low 66 rushing yards.

Douglass set the tone on the opening series when Boyle’s first three plays netted zero yards. On the first play following a punt, the Broncos’ T.J. Horton ran 58 yards for a touchdown.

“They got us early last year, … and I thought our kids really did a good job early,” Douglass coach Nathan McPeek said.

While Douglass scored on its first three possessions in each half, Boyle’s first three series and four of its first five ended without a first down and with either a punt or an interception.

The Rebels’ lone touchdown came in the second quarter, when Montavin Quisenberry threw a 24-yard halfback pass to a wide-open Keenan Stewart to cap a nine-play, 80-yard drive.

“The season’s not over. You’ve got to learn from this and move forward, and our guys are going to do that,” Haddix said. “Do we like losing? No. Do we accept losing? No. But it’s happened; now it’s how are you going to respond? … It’s win or go home from now on, and I think our team is going to continue to fight. I know they will.”