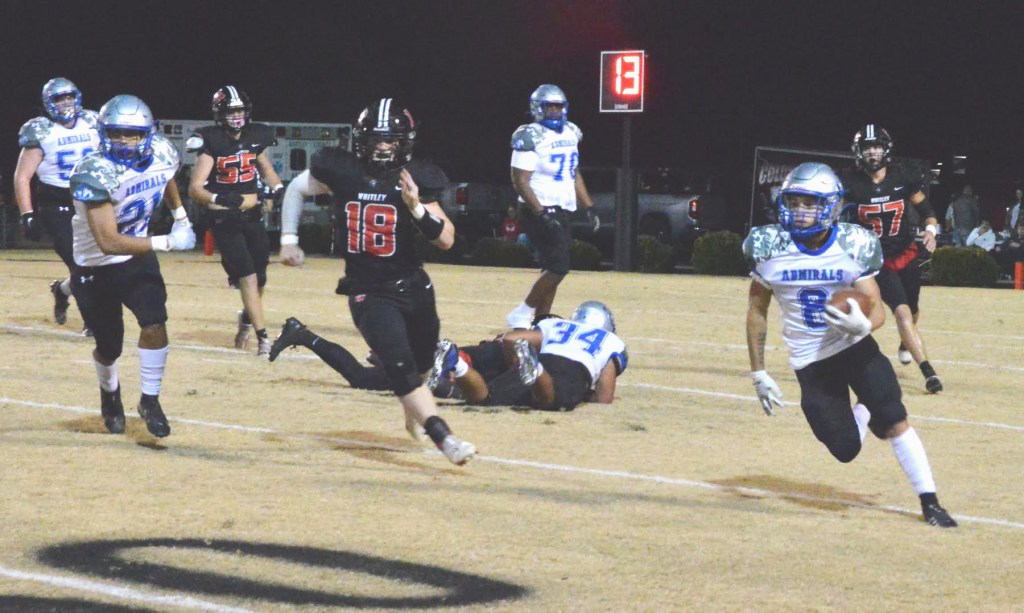 WILLIAMSBURG — A titanic struggle turned into a tough loss for Danville.

The Admirals came up short in a shootout Friday night, falling 54-50 to Whitley County in a game in which the lead changed hands five times.

Demauriah Brown did his best to help the Admirals keep pace in a game in which the two teams combined for 1,064 yards of total offense. Brown rushed for 319 yards and five touchdowns, including Danville’s last two scores.

However, Whitley scored the last of the game’s 14 touchdowns with 2:21 remaining to win the regular-season finale at Colonel Stadium.

“I am extremely proud of how hard and well our team played,” Whitley coach Zeke Eier said. “Offensively, we executed at a high level for all four quarters and we got big stops when we needed to before half and at the end of the game.”

Brown, who had five rushing touchdowns three weeks earlier in Danville’s win over Somerset, became the first Admiral in at least 10 years to run for five TDs twice in a season. He also had the first 300-yard rushing game for a Danville player in at least a decade.

“These accomplishments make me feel good because I told myself before the season started that I’m going to accomplish these goals,” Brown said.

Danville’s 532 total yards was its highest single-game total since Nov. 7, 2014, when it had 557 yards in a 60-24 playoff win over Betsy Layne, and it was exactly the same total Whitley had.

Brown’s 319 yards came on 26 carries, while Braidin Baughman had 148 yards and two touchdowns on 14 attempts for the Admirals, who got 513 yards on the ground.

Danville (4-6), which will host Monroe County this Friday in the first round of the Class 2A playoffs, led 50-47 after Brown’s final touchdown run with 5:36 remaining. However, Whitley (3-7) regained the lead when Dee Parker scored on a 2-yard run with 2:21 left.

The Admirals got the ball back with no timeouts remaining, and the clock ran out on their final possession.

Brown scored on a 17-yard run only three plays into the game, and his 55-yard run to the 2-yard line set up his second score, which gave Danville a 14-0 lead midway through the first quarter.

The Admirals led 21-7 after one quarter, but the Colonels tied the game at 21-all with consecutive touchdowns in the second period and took their first lead at 28-27 when they scored with 2:14 left in the first half on a 10-yard run by Tye Hamblin.

Hamblin threw for 216 yards and three touchdowns, and he caught a TD pass from wide receiver Mason Croley.

Bryson Potter had two TD catches among his four receptions, and Parker ran for 178 yards and three TDs for the Colonels, who had 288 rushing yards and 244 passing yards.

“We had a lot of guys step up for us in this game,” Eier said. “Our quarterback, Tye Hamblin, played his best game and ran the offense efficiently. He was dangerous with his legs and arms. Bryson Potter had a big game for us receiving, and so did Mason Croley. Both those guys also had a great game blocking, and I appreciate them being unselfish and doing that for the team.”

The Admirals struggled throughout the game with penalties that cost them vital yardage, but they benefited from onside kicks as Whitley attempted to keep the ball out of Brown and Baughman’s hands.

Baughman, Brown and Josh Bixler helped Danville deliver the ball to the 2-yard line on its first series of the second half, and Baughman scored from their and Brown added a two-point conversion to tie the game at 35-all.

The Admirals answered another Whitley score with a 39-yard touchdown run by Brown in the final minute of the third quarter that gave them a 42-41 lead, but the Colonels scored just over two minutes later on Hamblin’s third TD pass to go up 47-42.