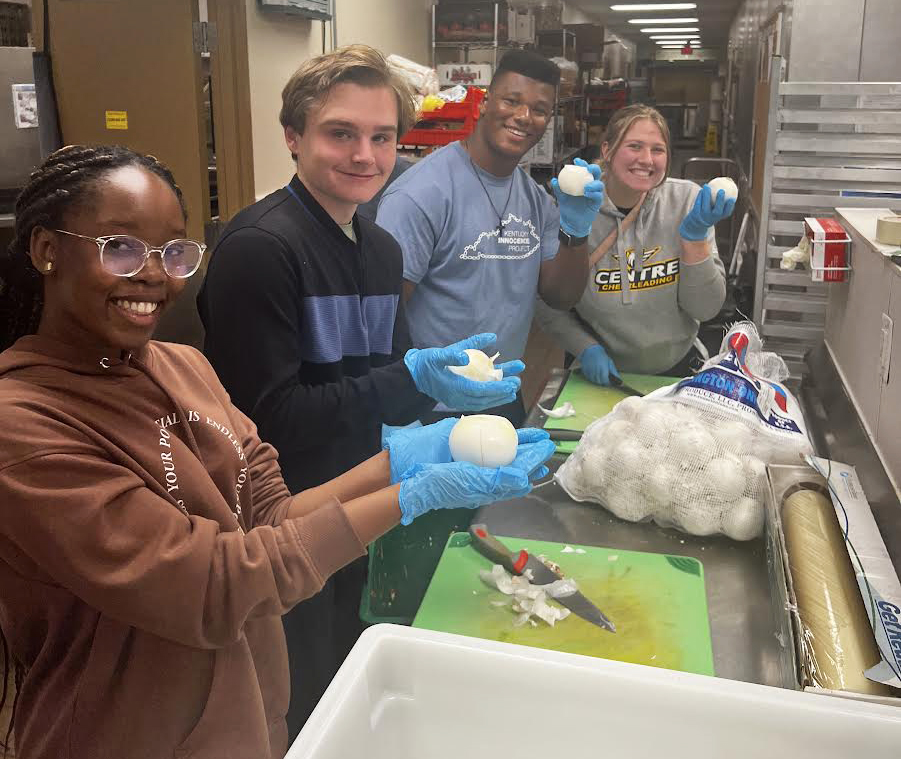 Centre College students participate in making soup for those in need as part of the Food Recovery Network program. Photo submitted

After seeing the amount of food being thrown out at Centre College, students were inspired to create a Centre chapter of the Food Recovery Network and partner with Soups On Us to help that food go to a good cause rather than end up in a landfill.

The Food Recovery Network began at University of Maryland in 2011 and now has chapters nationwide. Centre College’s chapter is the 6th one in Kentucky.

“The cool thing about the Food Recovery Network is it all student led,” said Nathan Whitlock, the program’s advisor. “It’s all students who are on the leadership team and working with the chef.”

The students in the program help reduce food waste by using excess food to create soups to bring to local churches participating in Soups On Us. The Soups On Us program is a collaboration between Lexington Avenue Baptist, Danville First Christian, The Presbyterian Church of Danville and Saint Peter and Paul Catholic Church to create meal boxes for those in need. Whitlock explained that the Centre students make about 10 gallons of soup for each church on a weekly rotation throughout the month.

“In my mind it’s a lot of soup, but it really only supplements the church programs,” said Whitlock.

The Centre College chapter was started in the fall of last year, but saw an increase in participation during the summer.

“It was pretty rough at the start,” said Whitlock. “This is student led and a learning process, so that is natural. With it being fall and a bunch a new faces on campus people are excited for opportunities for community service. The students have been the main drivers of this.”

With Centre’s chapter growing in popularity, students participating are looking into having it become an official club at the college.