Admirals sail past Monroe in 2A playoff opener 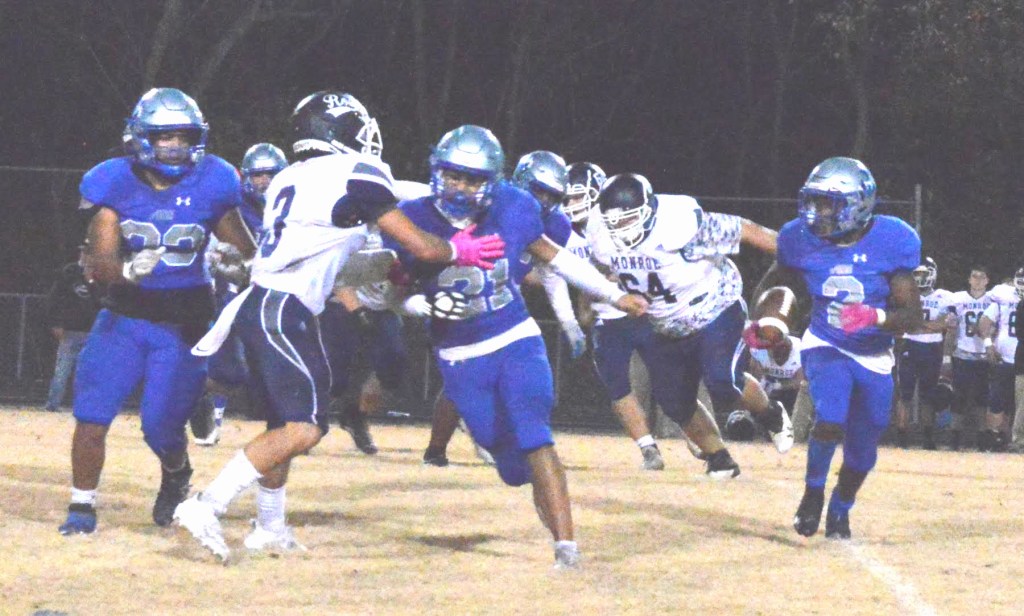 The Danville Admirals are sailing deeper into the playoffs.

Their voyage through the first round was smooth sailing, as they trampled Monroe County 49-16 in a Class 2A first-round game Friday night at Admiral Stadium.

Danville doesn’t have a great deal of postseason experience on its roster, but the Admirals erased an early deficit, then took control of the game in the second quarter.

“I’m just really proud of the guys,” Danville coach Mark Peach said. “First round playoffs, there’s always some jitters. The guys are nervous because it’s win or go home, and for us to have some adversity, I knew Monroe county came in hot, they had won three straight and they’re extremely well-coached.”

The Admirals definitely were not going home. Especially Demauriah Brown, whose four rushing touchdowns gave him a total of 27 this season, making him the first Danville player since Stephen Ray in 2015 to run for at least 25 touchdowns in a season.

Brown rushed for 217 yards, Demontrae Trumbo ran for 100 yards and Danville (5-6) very nearly reached the 500-yard mark in total offense for the second consecutive week as it advanced to a second-round game this Friday at Metcalfe County.

“Playoff wins are so hard to come by, and for us to get this one first round, I’m just really happy for the guys,” Peach said.

Brown got the first of his four touchdowns 46 seconds into the game and immediately after Josh Bixler moved the ball 17 yards to the Monroe 10-yard line.

Monroe (3-8) made big moves when Branson Williams’ 29-yard pass to John Harlin moved the ball to the Danville 16. A sack from Xzavion Brown moved the Falcons back to the 25, but Jameson Petett threw a touchdown pass to Williams and they took the lead on a two-point conversion.

“We didn’t quit. I mean, we knew we were coming to play a very good football team, and Danville has some very good skill, and we knew we had our work cut out for us, but our kids didn’t quit,” Monroe coach John Petett said. “The outcome is not what we wanted, but my hat’s off to Coach Peach and his team; they have done a fantastic job.”

Bixler, Braiden Baughman and Brown worked tirelessly to move the ball to the Monroe 1-yard line on the Admirals’ next possession to set up a 1-yard touchdown run by Brown that gave them a 14-8 lead.

The Admirals’ defense helped them seize control of the game in the second quarter, breaking up pass after pass.

“(Assistant) coach (Lucas) Shouse and our defensive staff just did a great job. We were more aggressive defensively, and the guys just bought into their responsibilities and there were some important pass breakups, which gave us the ball back offensively,” Peach said.

Brown scored on runs of 20 and 22 yards in the second quarter to give Danville a 28-8 halftime lead.

After he and Baughman were injured in the third quarter, a 21-yard gain by Trumbo set up a 4-yard touchdown run by Jakeem Ray.

“We’re just happy ‘Mauri’ was able to come back and do some things, but while he was out, Jakeem came in and we didn’t miss a beat,” Peach said. “I’m just really proud of him and his composure, I thought he had some great hits defensively and Jakeem had some great tackles on kickoff.”

“Obviously Mauri had another big game, and Baughman, ‘Bubba’ (Trumbo) came in, Bixler, so we had a lot of different people.”

Trumbo closed out the game with a pair of fourth-quarter touchdown runs, scoring from 2 and 27 yards as the Admirals headed for the second round.

“It’s just really special to have this group to be so close, just one game away from the regional championship,” Peach said. “I’m just excited for the opportunity for these guys.”