Boyle opens 4A playoffs with 49-0 rout of Rowan 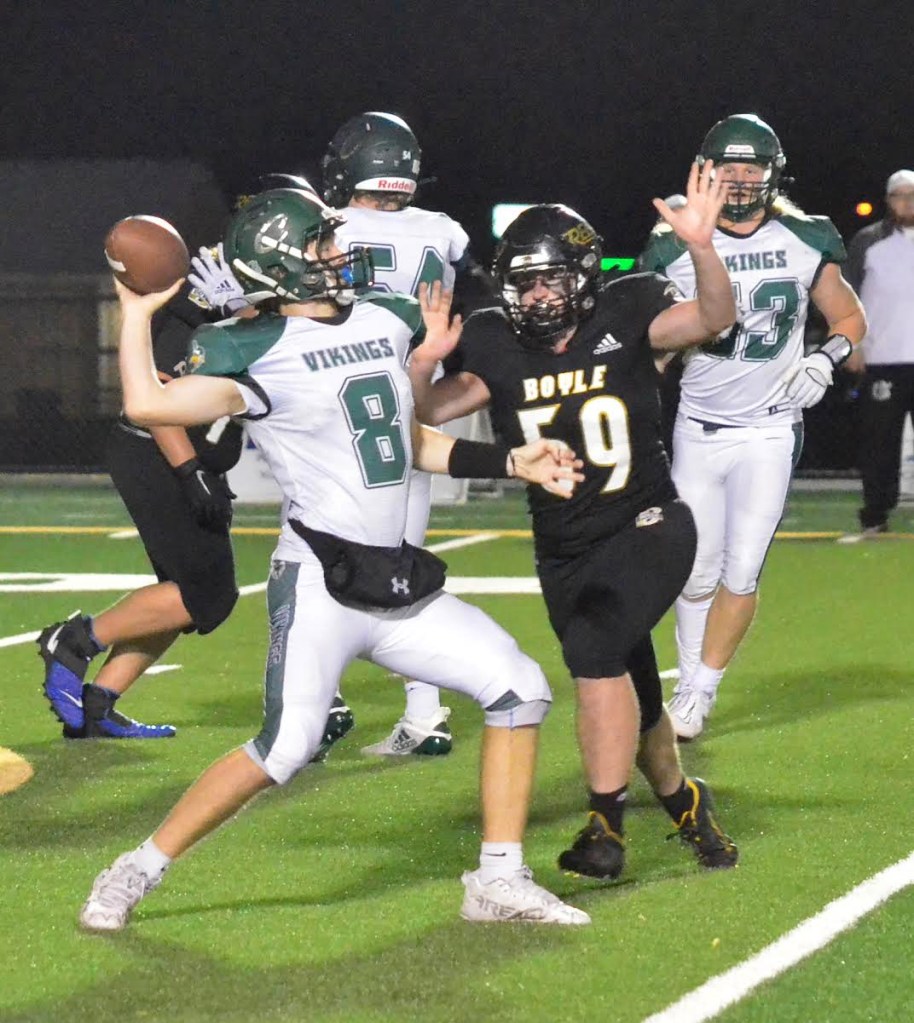 Boyle County was back on track, and Rowan County couldn’t stop this train.

One week after a rare lopsided loss, the Rebels hit the field with a full head of steam Friday night and needed only a few minutes to flatten the Vikings in the first round of the Class 4A playoffs.

Boyle scored on offense, defense and special teams in a 36-point first quarter and rolled to a 49-0 victory at Rebel Stadium.

Coach Justin Haddix said he was happy with the way the Rebels played in the first week of what they hope will be a five-week season that culminates in a third straight 4A championship.

“Four more weeks is the most we can have for our team, and we want to get the full 16 weeks,” Haddix said.

Boyle (9-2) bounced back from a 37-6 loss to Frederick Douglass in their regular-season finale that was their worst defeat in six years.

“I felt like we executed at a high level, and that’s what you want,” Haddix said.

Avery Bodner, who made his first start at quarterback for Boyle, said the Rebels were determined to turn the sting of the Douglass defeat into something useful.

“I think it was good for us to actually lose that game. It showed us that if we don’t do our job we can be beat just like anybody else,” Bodner said. “I think it got everybody refocused and got everybody on the same page that we really want to come together if we want to win three in a row.”

Bodner directed the Boyle offense in a first-quarter assault that allowed the Rebels to dispatch Rowan (4-7) in just 1 hour, 37 minutes and move on to a second-round game this Friday at Boyd County.

He completed four of five passes in the first period for 116 yards and two touchdowns, and he ran for another TD.

Montavin Quisenberry had the two touchdown receptions, turning screen passes into scoring plays of 66 and 25 yards on Boyle’s first two possessions, and he scored later in the period on a 52-yard punt return.

Will Alexander returned an interception 14 yards for a touchdown, and Bodner’s 14-yard run and a two-point conversion run by Brock Driver triggered the running-clock rule with 17 seconds left in the first quarter.

Bodner hadn’t taken a snap at quarterback in two years before being pressed into service when Sage Dawson suffered a knee injury during the Douglass game. He played well in that game but said he felt more comfortable at the position Friday following a week of practice.

“It was better,” he said. “I got to prepare a little bit, I got to focus on my reads and my progressions. I came in prepared and just knew if I got it within my guys’ reach they were going to catch it.”

Haddix said he had confidence that Bodner, who usually plays running back and safety, was up to the task.

“Avery’s a football player. He can play any position. He could get in there and play center if we need him to,” Haddix said.

Bodner said he also got plenty of pointers from Dawson, whom Haddix said was even coaching Bodner during pregame warmups.

“Sage was there every day except when he had (physical therapy), kind of coaching me up and showing me what to do,” Bodner said.

Bodner was 5 for 6 for 125 yards for Boyle, which averaged 14.6 yards per play in the first half before reserves finished out the game.

The Rebels finished with 348 offensive yards one week after being held to a season-low 170 yards by Douglass.

Boyle’s defense put the clamps on Rowan in its second shutout of the season. The Vikings netted minus-6 yards on their four first-quarter series, and the Rebels forced two turnovers in their first five possessions, including an interception by Christian McGlone.

Rowan never threatened the end zone and didn’t cross midfield until the fourth quarter, and it finished with only 69 yards.