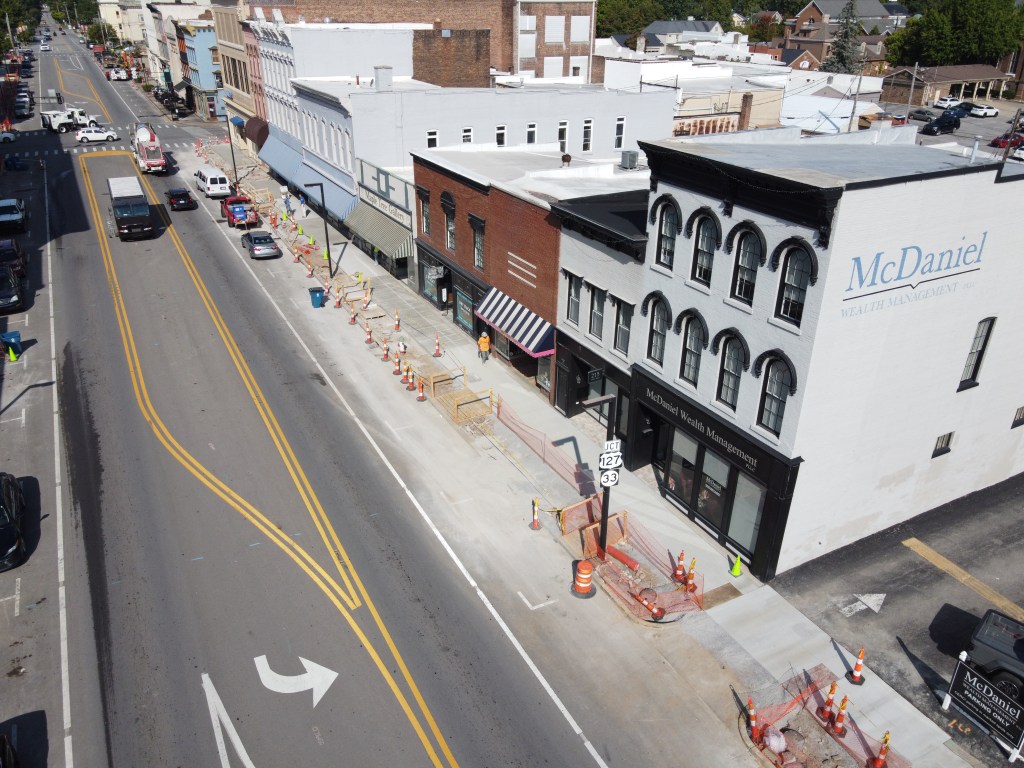 The Danville City Commission heard an update from City Engineer Josh Morgan about several construction projects including the downtown sidewalks.

Morgan said sidewalk crews have been very flexible, which makes it difficult for the city to provide updates due to changes in schedule and the weather.

Construction workers recently ground up the striping on Main Street to put down temporary striping to squeeze the road in. This plan is instead of their original plan to move one of the lanes to the middle lane; so they will not close any lanes, and traffic can flow as normal.

Crews have been putting in trench drains and underground pipes and inlets on Main Street, which Morgan said will be ongoing for a while longer.

He said that if crews can get the granite curb soon, they can start working on the area that goes between the curb and the sidewalk. Workers can continue to work on drainage and the curb and still maintain parking spaces.

“We’re really talking to property owners about how we’re affecting their businesses,” Morgan said. “It’s been tough to plan out each week what we’re doing; I get a three-week look ahead from them, but we’re hearing a lot of questions about the holidays coming up.”

He said they are working to come up with a plan for what Main Street will look like through Thanksgiving and Christmas. They will have a meeting on Nov. 9 to discuss the topic, and will announce holiday construction plans by the middle of November.

“Our real goal is to not impact their business as much as we can; we’re going to have access to everybody’s front door by then, all the front door sidewalks will be done, but it’s really about parking spaces for our shops that are on Main Street,” Morgan said. “We’re going to do everything we can to keep the parking in those areas open.”

He said construction will likely be confined to the corners and side streets through the holidays.

Crews have completed the duct bank for overhead electric on North Fourth Street, and will start on South Fourth soon.

The city had a public meeting several weeks ago about building a sidewalk on Baughman Ave. Morgan said about 40 people showed up and showed support for the project. He said only a few people were concerned about losing part of their yard for the sidewalk.

“We had a good conversation about the city working with folks about their concerns, being flexible, this doesn’t have to be the same rigid cross section the entire way, we could be flexible with width and placement, we’ve got a lot of infrastructure in the way we’ll have to work around,” Morgan said.

The city commission passed a resolution for Palmer Engineering to start on sidewalk designs. Their scoping fee for $57,000 includes preliminary designs and cost assessment for construction of the sidewalk. Morgan said $34,000 of that is survey work to go to each property and determine right-of-way.

Morgan said he will be applying for grants for the project, and that there’s a long list of grants the city can choose from. If they don’t receive a grant, however, the city will still build it.

Morgan said the sidewalk would go from Hustonville Road to the trailer park entrances. He would like to do both sides of the road in order to eliminate any safety concerns in people crossing the street.

City Attorney Stephen Dexter said this project has been delayed for many years due to a few people who did not want it to happen. He recommended the city start constructing where they have buy-in and hope that the others will fill in.

• Agreed to increase the number of police department positions from 40 to 41 to add a patrol officer. The Danville department supplies three school resource officers, which takes away from patrol, creating the need for another officer.

The cost to add this position is $90,000, which will be offset from revenue generated by school resource officer contracts, Human Resources Director Randy Boyd explained.

• Passed the second reading of ordinance 2002 for a zone change at 0 St. James Place from R1A to R1C for about 37 acres.