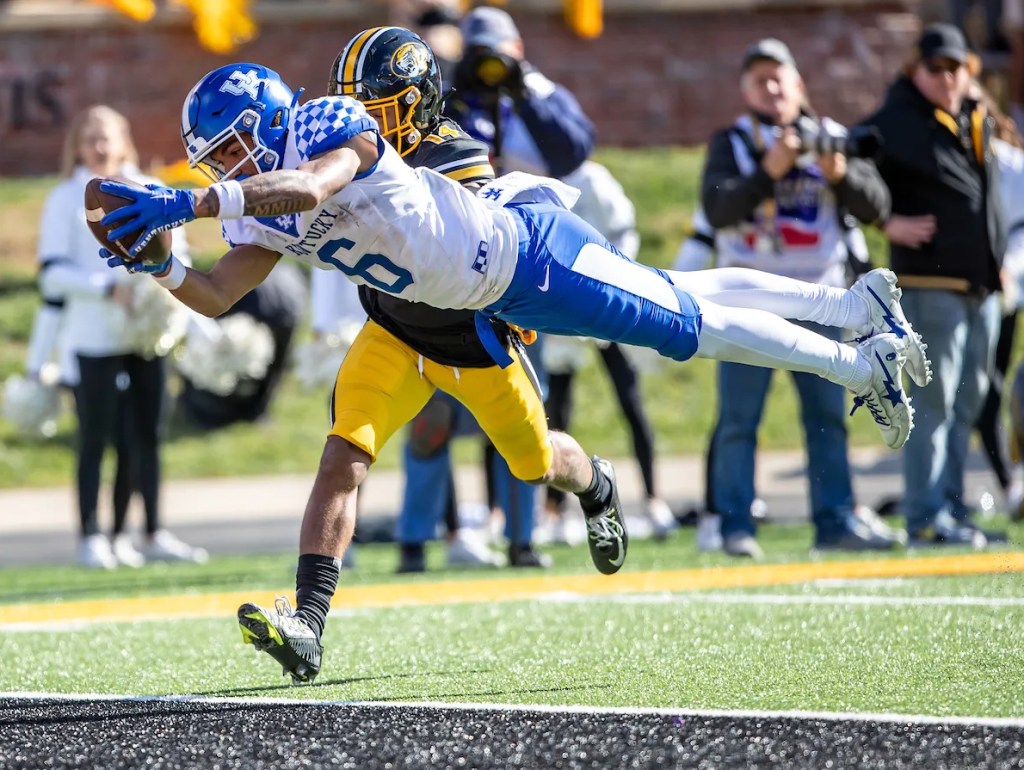 Amid a contest in which the defenses for Kentucky and Missouri flexed their muscles most of the afternoon, it was a botched punt snap that proved the difference for the Wildcats in escaping with a 21-17 victory over the Tigers on Saturday.

Incredibly, it was the Wildcats (6-3, 3-3 SEC) who benefitted from their own special team’s misfire, staking claim to a win making them bowl-eligible.

Lining up for a punt on fourth-and-4 from their own 41-yard line with 2:34 left, Kentucky long snapper Drew Perry sailed the snap over the head of punter Colin Goodfellow, who chased the loose ball down at the 4-yard line. Goodfellow managed to turn back upfield and boot the ball away just as he was tackled by Missouri linebacker Will Norris.

A flag immediately came out and after a discussion the officials penalized Norris for roughing the punter, determining that Goodfellow had remained within the tackle box and by resuming a punting motion had maintained the protection of a punter. Goodfellow was injured on the play and was carted off the field.

The play enabled Kentucky to run all but 38 seconds off the clock.

Tigers head coach Eli Drinkwitz didn’t agree with the explanation he received from the officials but said the play wasn’t ultimately what doomed the Tigers (4-5, 2-4).

“How a guy can still be a protected punter 50 yards down the field and how are guys supposed to know that he can’t tackle him is beyond me,” Drinkwitz said, “But I’m sure I’ll get an explanation and I’m sure it will defend them, and we’ll go from there. It doesn’t change the fact that we were 2 of 13 on third downs.”

Third downs proved pivotal for the Tigers on both sides of the football. While Drinkwitz’s defense held the Wildcats to just 242 offensive yards, yielding just 4.1 yards per play, quarterback Will Levis and the Kentucky offense converted 6 of 13 third downs, including reaching the end zone twice on completions.

After Kentucky held Missouri to minus-7 yards on the first possession of the game, Levis put the Wildcats on the board with an eight-play, 71-yard drive capped off by 9-yard touchdown pass on third-and-goal to Dane Key.

That largely marked the end of the offensive fireworks before both defenses asserted their dominance.

Missouri mustered just 76 yards of offense in the first half. Only a 44-yard field goal from Harrison Mevis put the Tigers on the scoreboard, and the Wildcats took a 7-3 lead to the locker room at halftime.

With neither offense capable of sustaining momentum, a special-teams miscue helped the Wildcats expand their lead in the third quarter. Missouri punter Jack Stonehouse had trouble handling a low snap and attempted but failed to scramble for a first down.

The Wildcats rode Christopher Rodriguez, who finished with 112 yards on 29 carries, on five straight rushes to the Missouri 19-yard line before Levis struck again on third down. Facing third-and-5, Levis connected with Tayvion Robinson for 18 yards. Two plays later, Levis found tight end Jordan Dingle for a 1-yard score to extend the lead to 14-3.

Tigers quarterback Brady Cook and the Missouri offense started finding their rhythm late in the third quarter. Cook led back-to-back scoring drives of 52 and 64 yards, completing 6 of 7 passes for 80 yards and rushing for two touchdowns. A two-point conversion throw from Cook to Tauskie Dove gave the Tigers their first lead of the game at 17-14 with 8:07 remaining to play.

But Levis and the Wildcats responded. After a squib kickoff by Missouri went awry, Kentucky started its next drive at its own 42. Levis took his team down the field in six plays, connecting with Key again on third-and-11 from 22 yards out for the game-winning score.

Fighting through the adversity his team faced against Missouri will benefit the Wildcats in the long run, Stoops said.

“When you play this schedule and these teams and the grind our players have in them, they want the results,” Stoop said. “We all do, but you got to continue to work.”

All four of Missouri’s losses in SEC play have come within a one-score margin. Drinkwitz feels both optimism and frustration in those results.

“It’s frustrating because we haven’t found the way or play to win but it’s obviously a sign of progress that we’re in the fight,” he said. “Now we got to find a way to win that fight.”

The savvy play by Goodfellow to get away a punt following the botched punt came at a cost. Goodfellow remained down on the field for several minutes receiving attention from athletic trainers before a cart carried him off the field.