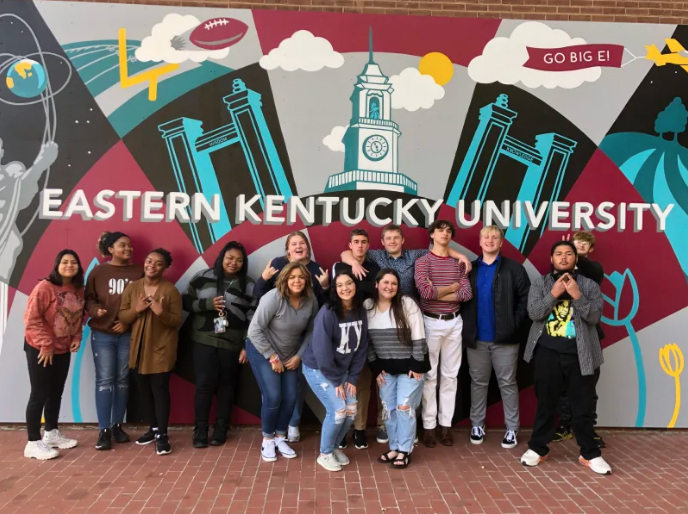 DECA is an international career and technical student organization with a focus on marketing, finance, hospitality and management.

The students who competed in the sports and entertainment track were seniors Iain McAlister, Sam Shearer and Chris Grier. These students will be honored for winning on a state level. Students who competed in the fashion retail track were seniors Auri Mitchell and Masyn Cochran. Masyn is also the president of DHS’s DECA chapter.

“I actually really like it,” she said about DECA. “When I first got into it, I was a bit nervous, especially being president because that’s a big responsibility. But everyone here is really welcoming, and they listen when I talk. And also, I think DECA in general is pretty fun.”

Another recent success the team had was at a workshop at Eastern Kentucky University, where the members put on a clinic.

Reyes-Martinez said she enjoys the fact that DECA opens the doors to scholarship opportunities. Right now her goal is to prepare for a future career in finance, one of DECA’s focus areas.

Damico said it’s been rewarding to watch the students learn and grow. Also, he’s excited the chapter has grown — it started out with six members and now has about 15.

“It’s very heartwarming,” he said. “I’m very proud to see these students — many of them I’ve had for the last two years in class, in my pathways — and watching them go to these events.”

He said some real-world skills DECA teaches is to help students think on their feet and problem solve.

“On top of that, watching them basically evolve into leaders,” he said.

He noted that he can tell some of the students’ confidence has increased based on their interactions with their peers in the hallways, and it’s helping them find their voice.

Looking forward, Kentucky’s Region 4 competition is January 27, and the team is well-prepared, Damico said. Then, there is a state championship in Louisville in February.

The DECA chapter is currently raising funds for a retail experiment and other projects. Donations can be given to Damico or student members. The chapter also has a local corporate sponsor, Bake and Crumble, a business that sells baked goods. 5% of the funds from Bake and Crumble purchases go toward the DHS DECA chapter.