It’s a changing of the guard for UK at linebacker 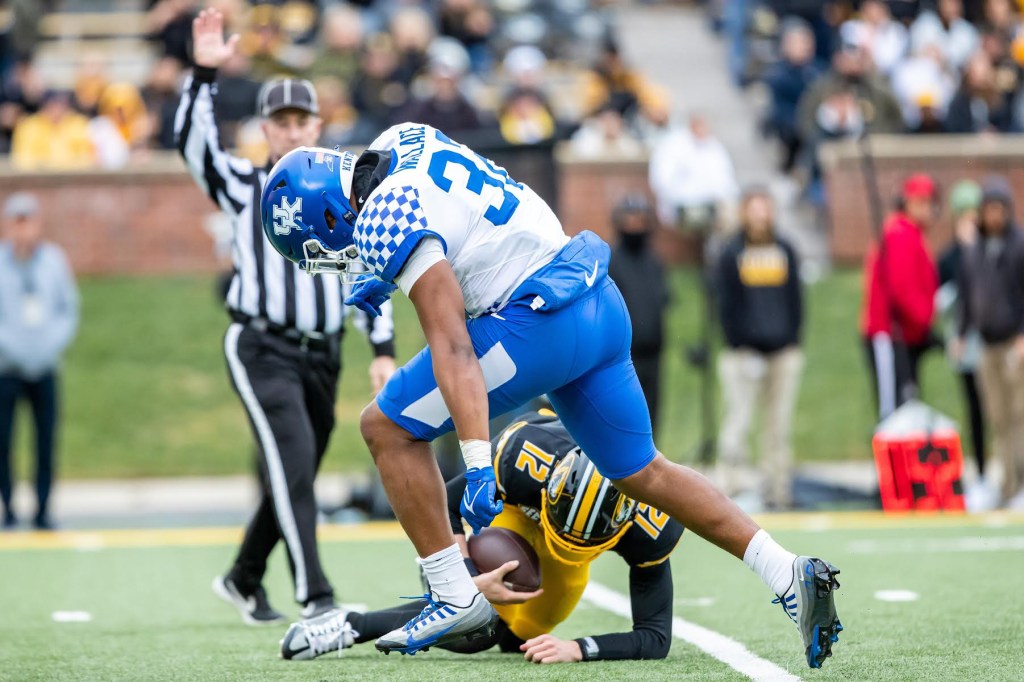 Sophomore linebacker Trevin Wallace had three tackles for loss and a quarterback sack among his nine tackles at Missouri. UK Athletics photo by Brian Moriarty

Saturday’s game at Missouri was a subtle changing of the guard for the Kentucky defense.

They responded like the future stars Square has openly predicted they will be in the 21-17 victory.  Jackson had six tackles, all solos, against Missouri while Wallace had a team-high nine tackles, including eight solo stops, three tackles for loss and one quarterback sack.

“It was real fun. That is what we wanted,” Wallace said after the win. “We had to step up. I like that we made plays. We had to show we are mature and Coach (Brad White) could trust us.”

Coach Mark Stoops made it clear after the game that he trusted Wallace going into the game, especially knowing the way Square had helped mentor him for two years. Wallace admitted he was a bit nervous early but Square told him to “go play ball” and he did.

“Coach Square is the heartbeat of our team. He has been here forever and gives us everything,” Stoops said. “You don’t want to see DeAndre hurt but I didn’t blink an eye with Trevin in there. He is a really good football player.”

He has a chance to be exceptionally good. Just ask UK Radio Network analyst Jeff Piecoro, a former UK receiver.

“He can be special. He has good football sense and is a great athlete,” Piecoro said after the Missouri win. “He was all over the field today. He can play sideline to sideline. He can play from first down to third down. I think he could be the next Danny Trevathan or Wesley Woodyard.”

Former UK linebackers Trevathan and Woodyard not only were great players for Kentucky but were great in the NFL. Piecoro — and others — think Wallace has that type of ability.

Former UK assistant coach Jon Sumrall, now the head coach at Troy, recruited Wallace and told me he was one of the best athletes he ever recruited and thought he could be one of the best linebackers ever at Kentucky.

Wallace’s high school coach, Ken Cribb, said the same things. Wallace broke the school’s long jump record held by Georgia receiver Lindsay Scott by 8¾ inches with a leap of 23-4 1/4. He won the state powerlifting championship his senior year with a power clean of 335 pounds. He had to play quarterback one game and ran for 384 yards against the No. 1 seed in the playoffs. At 6-2, 225 pounds he was timed at 22 miles per hour.

“If coaches could order a player off a computer checklist he would have all you wanted,” Cribb told me when Wallace committed to Kentucky.

Wallace was not overwhelmed with the leadership role he had to assume with Square out.

“I’ve got a big mouth. I’m going to talk regardless. If somebody’s down, I’m going to get them to smile,” Wallace said before the game.

He said Square told him next year he would be the defensive leader and he had to start showing that against Missouri.

“He said I had to take over and I took over today,” Wallace said. “Next year it will be me and DJ (Jackson).”

The two linebackers are friends off the field and both said that helps them on the field.

“You want someone you are cool with off the field because you can be comfortable with them on the field. It feels great having him on my side when I have a best friend off the field, too,” Wallace said.

Defensive coordinator Brad White liked how Jackson and Wallace work together to make each other better.

“They’re a good pairing because they keep each other up,” White said. “Trevin has a jovial personality and he keeps D’Eryk loose and D’Eryk plays his best when he’s loose. I think they can bring the best out of each other.”

White knows their “youthful exuberance” can lead to mistakes but he also knows they are mistakes that experience will fix.

“It’s fun to watch, it’s sort of that older brother, younger brother effect and they pull just as hard for when those guys are on the field as when they’re on the field. It was good.”