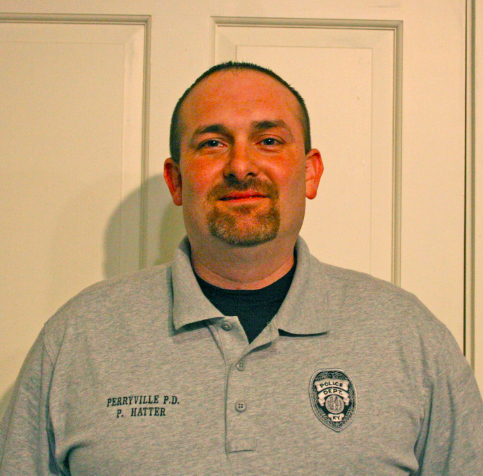 Mayor Carlos Miller and Officer Nick Paton presented Hatter an award of excellence for his time as chief.

“Hatter makes himself available at almost any hour of any day,” Paton said. “There are very few cities or counties where the majority of citizens have the personal phone number of a police chief or sheriff.”

He continued, “Even more rare is that individual taking calls and actually acting on them to fix or solve whatever issue they have. Parker not only does that, but does it whether he’s on the clock or not.”

Paton explained Hatter has answered calls from citizens while with this family and even while sick. He said no other police chief in Perryville has shown that kind of commitment.

“There are people in the community who have even very recently questioned why Perryville has or even needs a police department in the first place. Although there are many reasons why that question is at the least uninformed, the service the community has enjoyed under Chief Hatter should more than answer the question,” Paton said.

He continued, “There are sheriff’s deputies that work and several that live or have lived down here that don’t show half the commitment to Perryville, even while on duty, that Parker does on and off duty … My goal is not to bash other agencies, it’s simply to show the community of Perryville how well they’re taken care of under Chief Hatter’s leadership.”

In other news, Fire Chief Anthony Young is resigning as both Fire Chief and as Alcohol Beverage Control Administrator. His last day will be Dec. 31.

Miller said they have a replacement in mind, and Young will help train the new person.

“You’re going to be greatly missed,” Miller said to Young. “We appreciate the service you’ve done for the city over the past years as being chief and basically being firefighter here also; we hate to see you go.”

• The council passed the second reading of ordinance 2022-009 providing opportunities for public art that enhances the quality of Perryville’s commercial corridors. The ordinance provides a list of guidelines of where art can go in the city, including that art must not impair the ability to interpret the historic character of a structure or district.

• The recent paving list for Perryville roads are Polk Street from 68 to 150, an alley from 3rd Street to Bragg, and Smith Street from 150 to 3rd Street.

• ​​The Perryville Christmas parade is on Nov. 26 at 6:30 p.m. Any and all parade entries are welcome, and the line up will be at Perryville Elementary School at 6 pm.