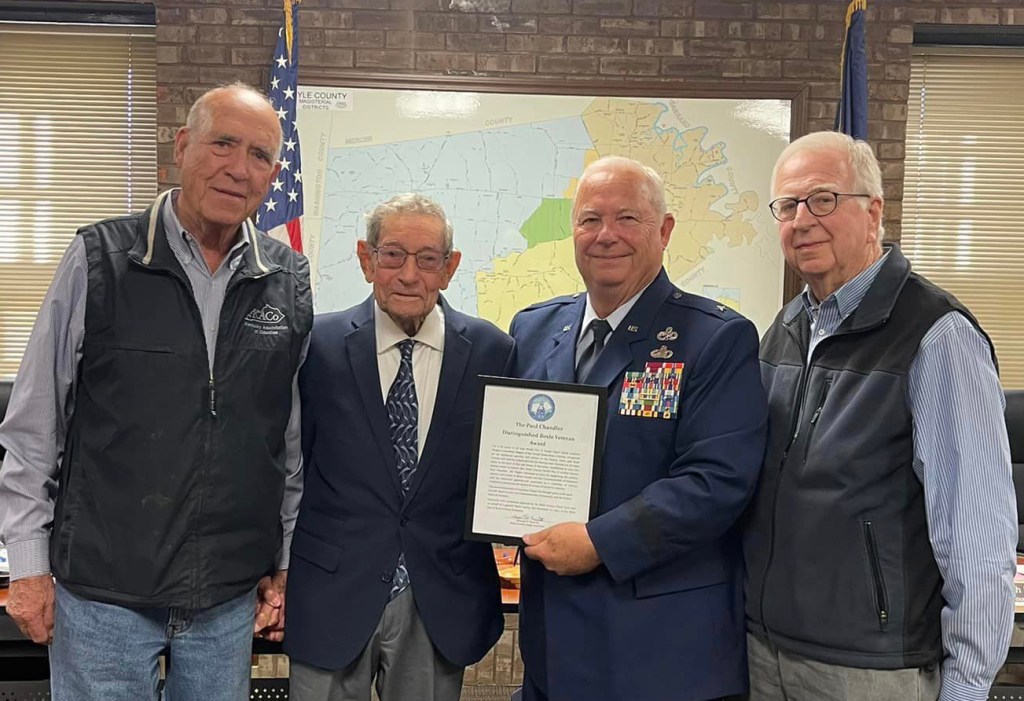 The Fiscal Court presented Lawrence Hogue with the 2022 Paul Chandler Distinguished Boyle County Veteran award at their meeting on Thursday.

In honor of Veteran’s Day, members of the court thanked all veterans for their service, including magistrates who served, and Judge Executive Howard Hunt, who is a retired Brigadier General from the U.S. Air Force.

Established in 2020, Boyle Veteran award is named after Paul Chandler, who was a combat veteran who fought at Battle of the Bulge in World War 2. The second recipient was Sergeant Jack Hendricks, who is involved in many veteran affairs in the county.

Hogue is a World War 2 Purple Heart recipient. He fought in the U.S. Army as a paratrooper with the 11th Airborne Division. His unit was also the first unit into Japan after the armistice and he served a year on occupation duty.

Hogue fought 32 days in combat before being wounded by a hand grenade. He shared the story of a man who saved his life that day he was wounded.

When his unit was fighting the Japanese army, Japanese soldiers were surrounding a mountain making it hard for troops to hold their positions or go around the mountain. Hogue said the Japanese were all around hidden in bushes, and they couldn’t see them going out.

His division had to take a different way around the mountain than they approached, and Hogue was the first man to take that different way.

Hogue was hit with a grenade. His squad leader had two men carry Hogue to a jeep at the top of a hill to get first aid. One of them was shot helping Hogue.

“The Japanese shot that buddy on my right, killed him dead,” Hogue said. “I honor that man, and I’ve tried very hard to locate that man’s parents or someone … I found out he was adopted when he was six years old from Cook County, Illinois, and no other information I could ever find.”

Hogue still has eight pieces of steel from the grenade in his body, one of them in his finger, which he lets people feel when sharing his story.

“These are stories that will never be told because it is so difficult, thank you for sharing,” Caywood said.

Hunt presented Hogue with the award and read the proclamation. Some of it reads, “Mr. Hogue continues to serve by supporting the military veteran community in Boyle County, and has enhanced generational awareness as a custodian of military tradition by promoting the history and virtues of service to America.”

Hunt also presented plaques to Caywood and Magistrate Phil Sammons, who are also veterans. Hunt, Caywood and Sammons will not be returning to the fiscal court next year after being outvoted in last week’s election.

Hunt spoke about his appreciation for veterans and how much they sacrificed for the country.

“It’s hard to know what to say, other than, it’s an honor to have served,” Caywood said.