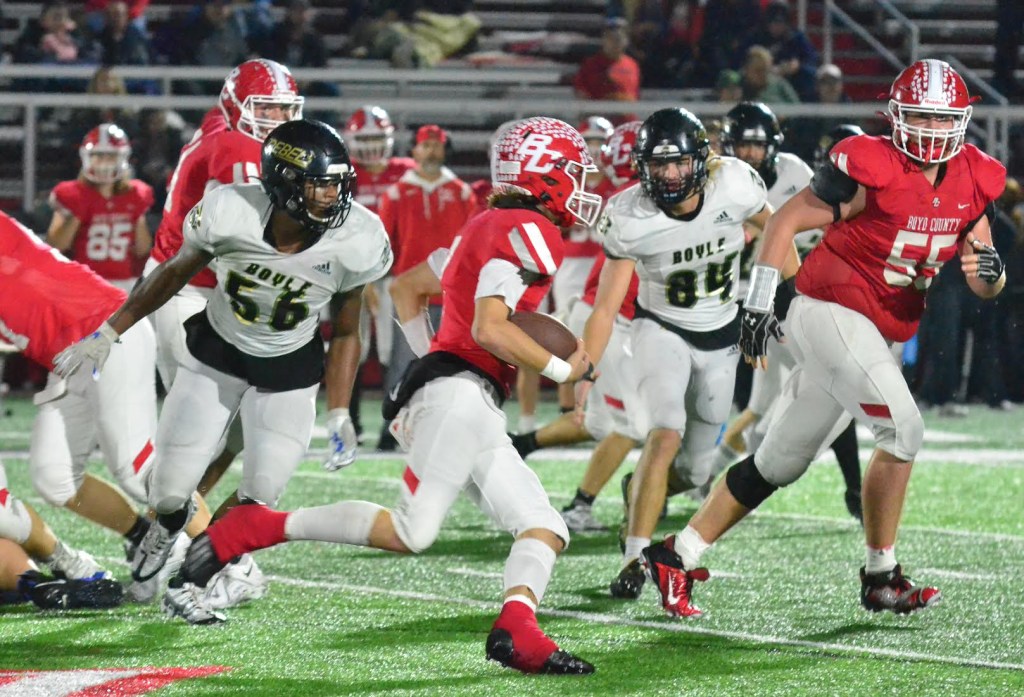 Compelled to play a postseason game on someone else’s field for the first time in three years, Boyle did what was required to reopen Rebel Stadium for a much-anticipated rematch.

The Rebels raced out of Boyd County with a 43-21 victory Friday night in the second round of the Class 4A playoffs that sent them speeding toward another regional championship game against longtime rival Lexington Catholic.

“We wanted to come here and (then) get back,” Boyle coach Justin Haddix said. “We earned this trip over here, and we were gonna earn the next one, too.”

Montavin Quisenberry scored four first-half touchdowns to lead Boyle (10-2), which hadn’t had a playoff game on the road since 2019 but will be back home this week — and next if it advances.

“It was my first time ever playing in the second round of the playoffs, so I had to show something that most people haven’t seen before and come out and do what I always do,” Quisenberry said. “You’re juiced up, win or go home and you don’t want to go home, so you give it all you’ve got.”

The remnants of Hurricane Nicole soaked Lions Stadium, and the stands were largely empty for a game that might not have had the full attention of a visiting team that was expected to win easily.

But the Rebels answered the bell just as they had done a week earlier in their first-round win over Rowan County, imposing their will in the first quarter and reaching the running-clock threshold in the first half for the second consecutive week.

“(Some players might think), ‘Oh, well, it’s raining, it’s 2 1/2 hours.’ And our guys came to play football,” Haddix said. “We talked about, ‘Do you love football?’ I love football. I love that we get to play another week, I don’t care where it is. And if you love football, you’re going to play it the way it’s supposed to be played, and I felt like our team did that.”

When their work was done, the Rebels got off the field, out of the locker room and onto westbound Interstate 64 as soon as possible.

“I think it was a positive trip because we had to battle against adversity, and we came up here and did what we had to do. And (it’ll be) the same thing when we come back home: We’ll do what needs to be done,” Quisenberry said.

Boyle had to hit the road because of a loss to LexCath, which came from behind for a 28-27 victory Oct. 7 that decided the District 4A-5 championship.

That game was in Lexington, but the rematch will be in Danville because Boyle finished just above LexCath in the KHSAA’s RPI standings, which determine host sites for the third and fourth rounds.

“It’ll be a good game. We’ve got to come out and do our thing,” Boyle linebacker Jayce Crowe said.

Quisenberry, who has seven touchdowns in two playoff games, ran for 78 yards on Boyle’s opening drive, which he capped with a 26-yard touchdown run.

A minute later, Tommy Ziesmer forced a fumble that Avery Bodner recovered for Boyle at the Boyd 15-yard line, setting up a 1-yard TD run by Dalton Stone.

Quisenberry scored on an 11-yard run two plays into a 29-point second quarter to cap a 68-yard drive and give the Rebels a 21-0 lead.