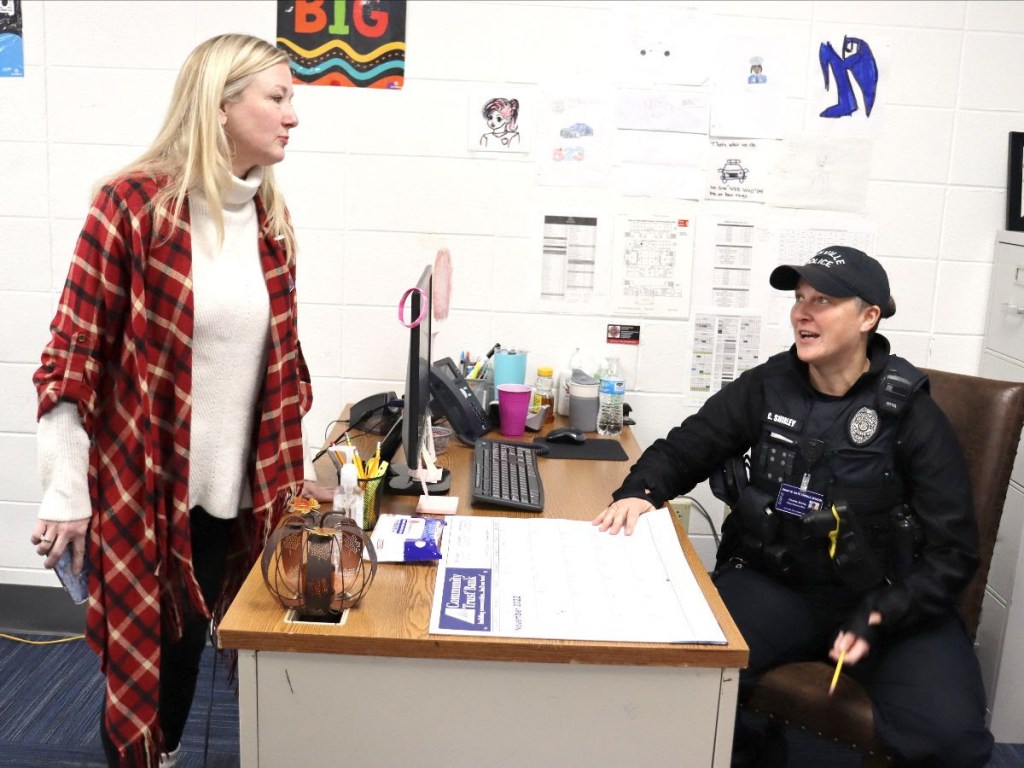 John W. Bate Middle School Principal Michelle Carver and Assistant Principal JD Smith are both new to their current administrative roles this school year and are already making improvements to the systems the school has in place.

Both know the school well — Carver was assistant principal for eight years before taking her current position, and Smith has had several teaching roles in his 15 years working at the school, including as a science and social studies teacher. His most recent role was as Technology Resource Teacher for about 10 years.

Smith commented that Carver has offered consistent leadership in her time with the school.

“Michelle has shown that she’s here for Bate,” he said.

They both shared what has made them continue to commit to Bate.

“The kids — they have so much personality.” Carver said. “The kids here are very appreciative of everything you do. You give them a piece of candy … or if you go to their game or you’re there for them — they are so appreciative and thankful to have you there for them.”

Smith said, “It’s the community. I didn’t come over from anywhere else. This is the only place I’ve ever been, and honestly, I don’t know if I’d be the assistant principal if it were anywhere else because I’ve felt like I want to be here. It feels like home, so I want to stay and do the best we can for the staff, and ultimately, the students.”

One major focus the administrators have had is on Positive Behavioral Interventions & Supports (PBIS). They started implementing LiveSchool, a school culture and behavior management system, because its main emphasis is on earning points for good behavior, rather than having an emphasis on strikes.

The school also now assigns students to “houses,” which are randomly generated and compete against each other for rewards each nine-week period based on behavior. The last house reward was a sundae party after lunch.

“We’re wanting to add to that, the house competition part, because the students really like that,” Carver said.

Smith said one of the reasons the school switched to LiveSchool from the old system it had in place was because “we wanted to provide the teachers with an easier way to celebrate all of the things that are already happening that sometimes get overshadowed” instead of emphasizing recording strikes. Through the system, students can earn points and spend them through the LiveSchool store on snacks, breaks and other rewards.

There have been several positive results since the implementation of LiveSchool, Carver said. She can think of a particular student who is working hard with one of his teachers to set behavioral goals. He has been able to earn breaks and other rewards through LiveSchool due to his progress when it comes to behavior.

“That kid was so happy, and we were also happy for him because everyone has worked to help him be successful,” Carver said.

Smith said the school even feels different compared to last year, when it was going through a leadership transition.

“The culture of the building is so much more positive,” he said. “From a school standpoint, just walking through the halls, it feels different than it did last year.”

Another thing the school has been doing related to PBIS is refining school-wide expectations and what they look like in common spaces, classrooms and other parts of the building.

“We have to adapt constantly,” Carver said.

When she first started as principal, Carver shared that she wanted Bate to establish more traditions and consistent celebrations. One thing the school started last year and continued this year is a back to school bash. And for Veterans Day, the school had an outdoor ceremony around the flagpole, something Carver anticipates the school will do again next year. The same goes for a pep rally the school held at Admiral Stadium for football.

Going forward, one of the administrators’ goals is to improve staff retention.

“I want people to stay,” Carver said. “I want us to have the reputation of strong staff and providing a really strong educational foundation for middle school students. I feel like that’s very important, but also, I want it to be a place where the kids enjoy coming to school and where everyone’s happy to be here.”

Carver and Smith regularly check in with staff and are open to their thoughts and suggestions. They also hold regular meetings, meet with Instructional Coach Jennifer Shearer regularly, and survey their staff.

“I think one of our top jobs is making sure our teachers are supported,” Smith said.