DBCDC chairman says new board will refocus on the issues 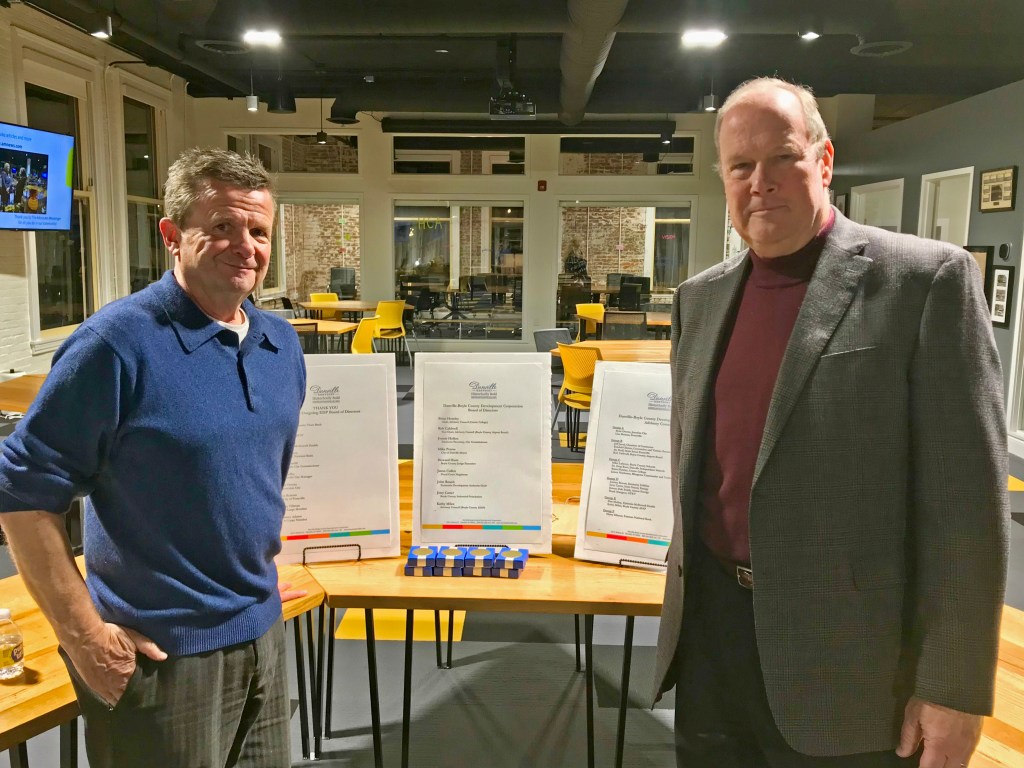 The new Danville Boyle County Development Corporation, reformed from the old Economic Development Partnership, held an open house for community members to meet the new board on Nov. 15 at CentreWorks.

The new board had its first meeting in October. A board representative from Centre College, Brian Hutzley is the new chairman. He was the previous vice chair of EDP for the last five years.

Hutzley said some of the problems with EDP stemmed from a lack of communication, honesty, and the ability to walk through and solve issues. He said a house divided on some topics would lead to dead ends instead of finding solutions.

One reason for those problems was that the board of 17 people was too big, and some roles weren’t as clear as they needed to be. Hutzley said different personalities sometimes clashed.

“Everyone served for a positive reason, but that doesn’t mean we solved all the things that needed to be solved,” Hutzley said. “I think having a smaller board will make a huge difference.”

The new board is made up of nine people from city and county governments, local organizations and the EDA. Hutzley said the board is committed to working together on some of the biggest issues facing Boyle County, like housing, employment and workforce development.

“They’re all very, very committed to making this work; they realize it’s been too long, that we’ve missed opportunities,” Hutzley said.

Hutzley said one thing the new organization will work on is getting the state to recognize how important Boyle County is to the region. He said they can get state funding for different development projects.

“We don’t have that strong a connection in Frankfort,” he said. “Everyone in Frankfort has some connection to Danville, but we’ve not been knocking on their door as a community the way that we should in a united face.”

He also said they need to work with local assets, like the railroad company and other major companies, to see how they can invest more in the community. More than just building projects and bringing in corporations, he said the people already here can continue to invest.

One major ongoing discussion is how the DBCDC will measure its success. A big concern with the EDP that city and county officials had was that they didn’t have a clear way to measure success.

Hutzley said there’s industry standard measurements for economic development, like employment rates, tax base, and the number of new jobs; but that it’s broader than those numbers alone.

Interim Director Terry Crowley has been going through the organization’s strategic plan from 2017, and said there’s nothing in the plan that was a metric for success. He said the board will have to create their own metric.

“The board has to decide what its metric is, and if they do, then everybody’s focused on the same thing,” Crowley said.

The board will be working together to come up with several metrics that make sense and set goals. Crowley said the index should include whether they are growing the local economy, bringing good-paying jobs, and whether the assets they have for land and infrastructure are creating jobs.

“There are some people out there who think that it’s all about median family income, or how many jobs you create, but it’s bigger and broader than that, and the metrics we’re going to have to measure are going to tie into increasing revenue [for city and county],” Crowley said.

Crowley is continuing to take things out of the strategic plan that they don’t need, since it was too lengthy to be effective. He is highlighting the key aspects the board needs to focus on.

The board has started the search process for a permanent director with a small personnel committee. Crowley and Hutzley said they believe the new board will work well together.

“It was a matter of getting everybody refocused on how important this whole economic development topic is, and it’s complicated, and it’s a long game, but it’s vital, and I think we’ve got a really good start now,” Crowley said.

At the open house, the organization gave awards to outgoing EDP members to show appreciation for their years of service.