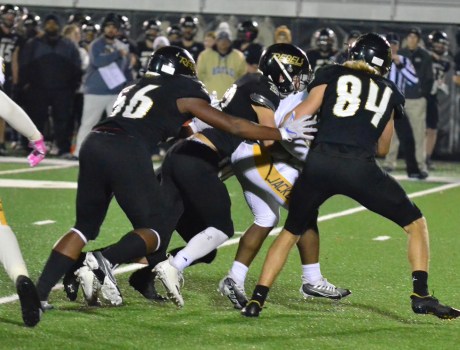 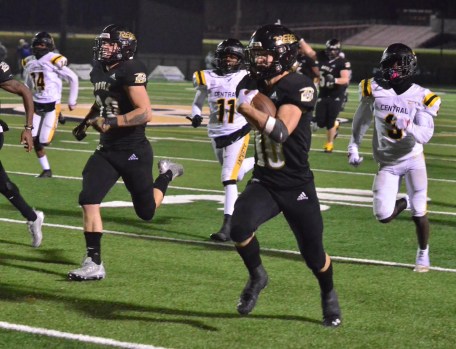 Avery Bodner of Boyle County outruns the Central defense on a 57-yard touchdown run during the fourth quarter Friday. Photo by Mike Marsee

The Boyle County Rebels have powered their way back to Kroger Field.

Boyle earned a shot at a third consecutive Class 4A championship by playing power football, pushing its way past Central and into the state finals by dominating the line of scrimmage in a 35-21 victory Friday night at Rebel Stadium.

It’s a fitting metaphor for a season in which the Rebels have pushed their way through more obstacles than they have faced in their recent runs to the finals.

“It’s a testament to our kids, the hard work that they do, and that’s who I’m so proud of,” Boyle coach Justin Haddix said. “Things didn’t go perfect tonight, there was adversity. We just kept fighting, and that’s what this group does.”

For the third consecutive week, Boyle’s offense relied primarily on the run, once again with considerable success. And for the fourth consecutive week, its defense stifled the opponent’s run game, this time bottling up one of the best running backs in the state.

The Rebels’ effectiveness both in running and in stopping the run served to keep Central’s offense off the field, and it was due in no small part to its work on the line of scrimmage.

“The line of scrimmage, that’s where the game’s won and lost at, and our kids kept playing,” Haddix said.

Boyle (12-2) will play once more this Friday when it makes its fourth consecutive appearance in a championship game.

“It’s my fourth trip, four in a row, (and) hopefully we can end with a bang,” Boyle linebacker Dalton Stone said.

The Rebels will face Corbin (14-0) for the 4A championship at 8 p.m. Friday at Kroger Field in Lexington as they play in the finals for the 13th time in school history and try to win their 11th title.

Boyle is no Cinderella story, but its road to Lexington was a little rockier this season than in years past.

The greatest obstacles were injuries, as starters and role players alike have been sidelined at various times since the preseason, and some remain out of action. There were two defeats along the way, a small number but still a shock to the system for a team that hadn’t lost more than once in a season since 2016.

But the Rebels worked through those things to put themselves in position to win it all again.

Crowe and Avery Bodner, who rushed for 185 yards and three touchdowns for Boyle, said the Rebels were prepared to counter Central’s powerful ground game with a power attack of their own.

“We knew they were going to run the football, and we knew that if we could run the football on them it would kind of demoralize them, so that had some part going into it,” Bodner said.

“He’s a great back. When you give him a hole he always makes a way,” Crowe said.

“We just played our game, got off the ball and got them moving and kept the ball out of their hands,” Crowe said.

Montavin Quisenberry ran for 68 yards and had an 84-yard touchdown catch that will go down as one of the best highlights of the season, and Sage Dawson threw for 105 yards and two TDs.

On the other side of the ball, Boyle’s defensive linemen pushed through the Central line to prevent Cortez Stone, who entered the game ranked second in the state in rushing, from getting free for big plays.

Cortez Stone, who entered the game averaging 8.7 yards per carry, ran 26 times but had only 68 yards and one touchdown and had only three runs of longer than 5 yards.

“He’s the best runner I’ve seen all year,” Dalton Stone said. “We loaded up the box and played downhill as much as we could and just hoped for the best.”

Central (9-5) couldn’t get much offense from other sources, either. Quarterback Xavier Brown threw for 92 yards and ran for 67 for the Yellow Jackets, who finished with 220 yards.

Haddix said Boyle’s offense and defense worked together well to control the game, with each unit taking some of the stress off the other.

“Your offense and defense have got to complement each other,” he said. “I thought we played really good complementary football.”

Boyle used two long drives — 11 and 14 plays — to score twice in the second quarter. Jakei Tarter pulled in a pass while managing to come down inbounds along the side of the end zone to give the Rebels a 14-0 lead with 27 seconds left in the first half.

Central pulled within 14-7 after consuming 7:43 on the opening series of the second half, and Boyle answered with another 11-play drive capped by Bodner’s second touchdown run.

The Rebels had an answer for all three of the Jackets’ scores. After Justin Brents returned a kickoff 98 yards to the house, Bodner broke free for a 57-yard TD run to make it 28-13 with 9:58 remaining.

And when the Jackets pulled within a touchdown once more, this time with 5:48 to go, Boyle responded two plays later with Quisenberry’s spectacular play.

Dawson threw the ball from the Rebels’ 16-yard line to midfield, where the ball was tipped upward as Quisenberry and Central’s Avion Johnson-McNeal went up for it. Another defender, Amontez Woolfolk, closed in on the play and dived for the tipped ball, but Quisenberry stayed with the play, caught the pass and left both defenders on the ground behind him as he sprinted to the end zone for the clinching touchdown.

Boyle now stands within one win of putting another set of numbers on the outside of the Rebel Stadium press box.

“This is the expectation every year here,” Bodner said. “It starts back in January during (weightlifting. Coaches are) always saying, ‘How do you want to be remembered?’ We want to be on the stadium. We want our year to be remembered.”