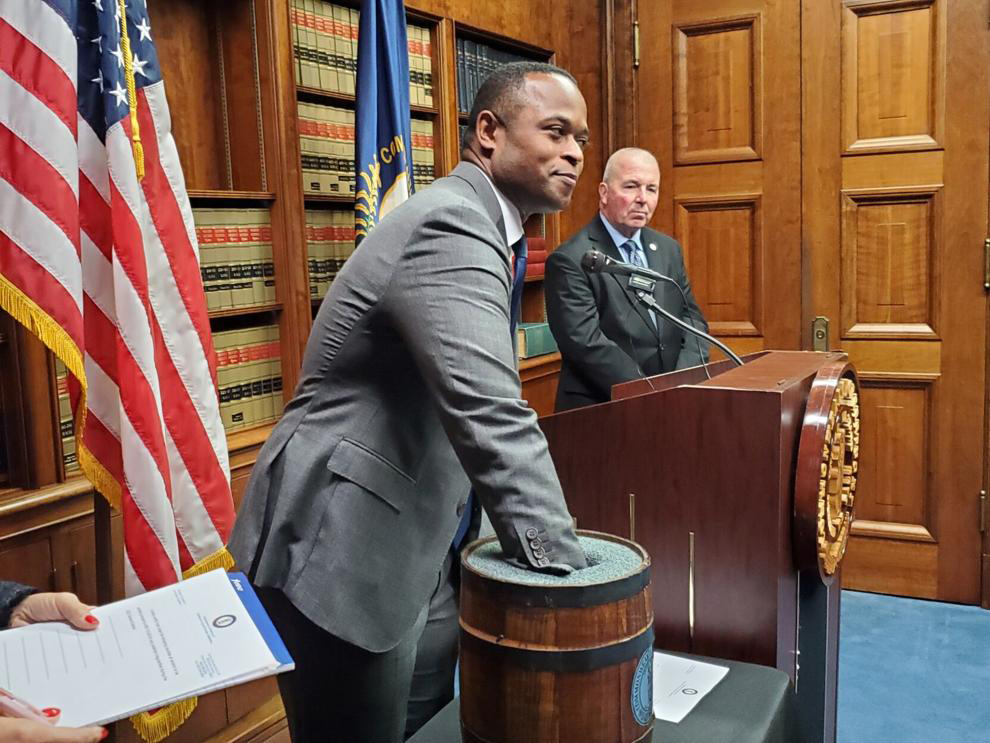 Attorney General Daniel Cameron reaches into a barrel to select the 12 counties that would do a post-election audit. Kentucky Today photo by Tom Latek

Attorney General Daniel Cameron held a public random drawing on Monday to select the 12 Kentucky counties that will undergo a 2022 post-general election audit as required under state law.

“Today, ” Cameron said, “we are safeguarding the integrity of Kentucky’s elections. By doing so, we ensure that your vote matters and that your voice is heard. This is a responsibility that we take seriously.”

The counties selected were Jefferson, Webster, Shelby, Rowan, Oldham, Laurel, Larue, Owen, Anderson, Christian, Daviess, and Breathitt. The Attorney General’s Department of Criminal Investigations will conduct the audits to determine if any irregularities took place during the 2022 general election.

“Investigators with this office will work with county clerks to assess for any voting irregularities in the 2022 general election,” he said. “After completing these audits, the results will be presented to the grand jury in each audited county, who will then report their findings to the senior judge for their judicial circuit.”

“Currently, we have three open criminal investigations from the 2022 general election,” he said.  “As the investigations are ongoing, we cannot comment on specifics.”

“I’m pleased to report that we did not find any irregularities in those counties,” Cameron said, “and to ensure they are not audited in two consecutive elections, if they are drawn again, I will set that county aside and draw another one.”

Monroe was one of the 12 chosen on Monday. But since they were audited after the primary, another county was chosen as a replacement.

In the past, state law required the post-election audits in six counties, equal to five percent of Kentucky’s 120 counties, but the General Assembly passed legislation this year which doubled the number to 12, effective with the 2022 primary.