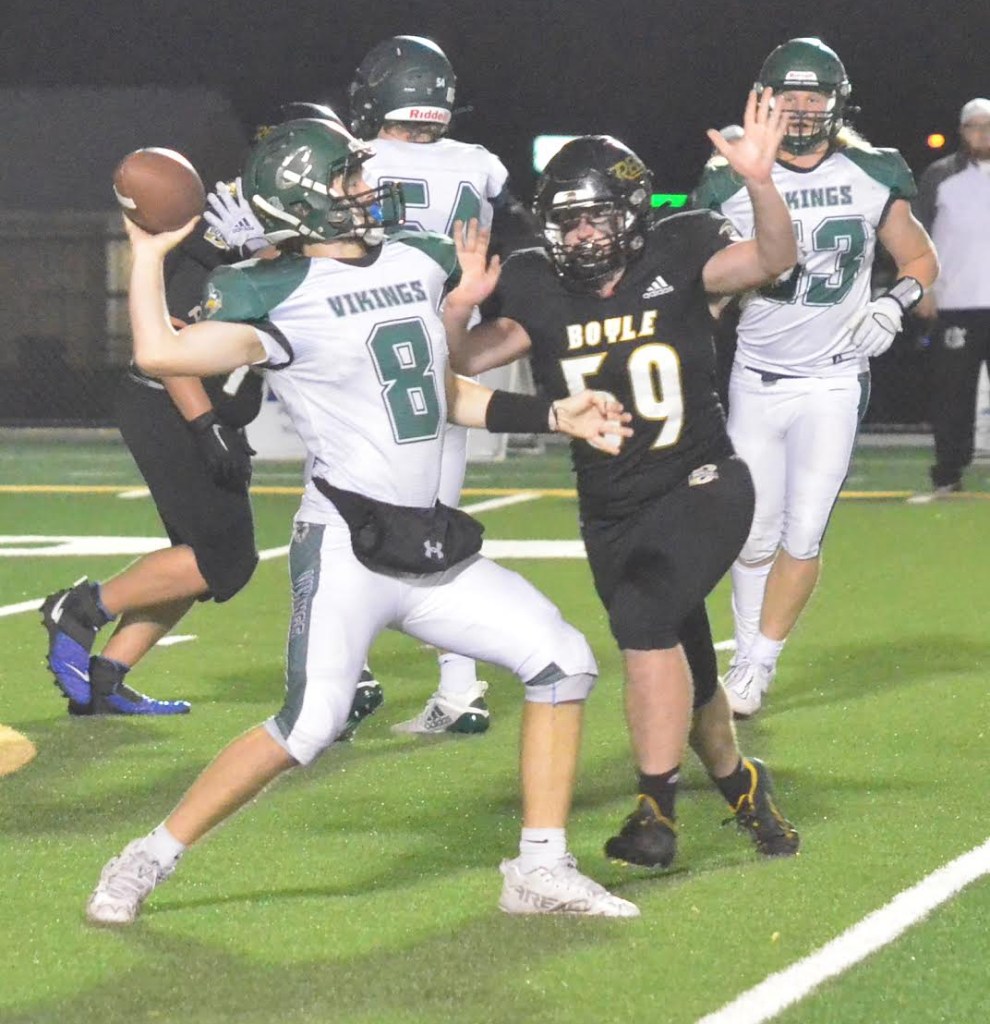 Aidan Gosser (59) closes in on Rowan County quarterback Zach Menard during the third quarter of their playoff matchup on Nov. 4. Winning the line of scrimmage will be key for whoever wins Friday’s Class 4A state championship game between the Rebels and Corbin. Photo by Mike Marsee

You want to win a state championship? You’d better win the line of scrimmage.

Both Boyle County and Corbin are well stocked with playmakers who could become difference-makers Friday when the teams face off for the Class 4A championship in Lexington.

However, Boyle coach Justin Haddix said if the Rebels are to win a third consecutive state title and their 11th overall, it will be because of what happens on the front lines.

“It’s going to be won on the line of scrimmage,” Haddix said.

Like so many championship games before, the battle between the Nos. 1 and 2 teams in the 4A RPI standings — Corbin is rated just ahead of Boyle — will come down to which team has its way in the trenches.

Boyle (12-2) is in a good place when it comes to line play. The Rebels dominated the line last week in its semifinal win over Central and have relied primarily on the run in their four postseason victories.

Boyle’s offensive and defensive lines have been rearranged more than once this season due to injuries, but Haddix said he likes the units he’ll send into battle Friday at Kroger Field.

“I feel like we’ve got a good group, and they’re playing hard,” Haddix said. “We’re going to get there up front.”

From Division I signees Andrew Hardwick and Tommy Ziesmer to workhorses such as Cooper Brummett, Austin Gorley and Huston Bird to undersized warriors like Jayce Crowe, Boyle’s linemen have adapted, adjusted and excelled throughout the season.

Corbin (14-0) boasts good line play as well. Like the rest of the Redhounds, the offensive and defensive lines are led by seniors, including Sean Brummett and Peyton Jordan.

“The best offensive line and defensive line is going to win the football game,” Corbin coach Tom Greer told the 13th Region Media Network. “Boyle County and Corbin are blessed with really good skill players, but it’s going to be won in the trenches.”

Cameron Combs, who moved to running back this season after starting at quarterback for three years, has rushed for 1,315 yards and 17 touchdowns for the Redhounds.

Combs was displaced at quarterback by sophomore Kade Elam, who has thrown for 2,306 yards and 31 TDs. Elam, the son of the team’s offensive coordinator, has committed to play baseball at Louisville.

“He’s a good athlete, and he’s got good control of the offense and what they want to do,” Haddix said.

But the list also includes receivers Jakei Tarter, Keenan Stewart and Will Alexander and rushers Dalton Stone and Brock Driver, all of whom have made big plays this season.

Ziesmer, Crowe and Driver each have at least 10 tackles for loss for the Rebels’ defense. Ziesmer’s 19 TFLs include nine sacks.

This will be the second meeting between Boyle and Corbin in the state finals. The Rebels, then coached by Chuck Smith, defeated a Corbin team led by Haddix — who left Corbin for Boyle in 2020 — 40-21 for the 2017 Class 3A championship.

A year later, Haddix and the Redhounds defeated the Rebels 21-0 in a Class 3A semifinal in Corbin that was the teams’ most recent meeting.