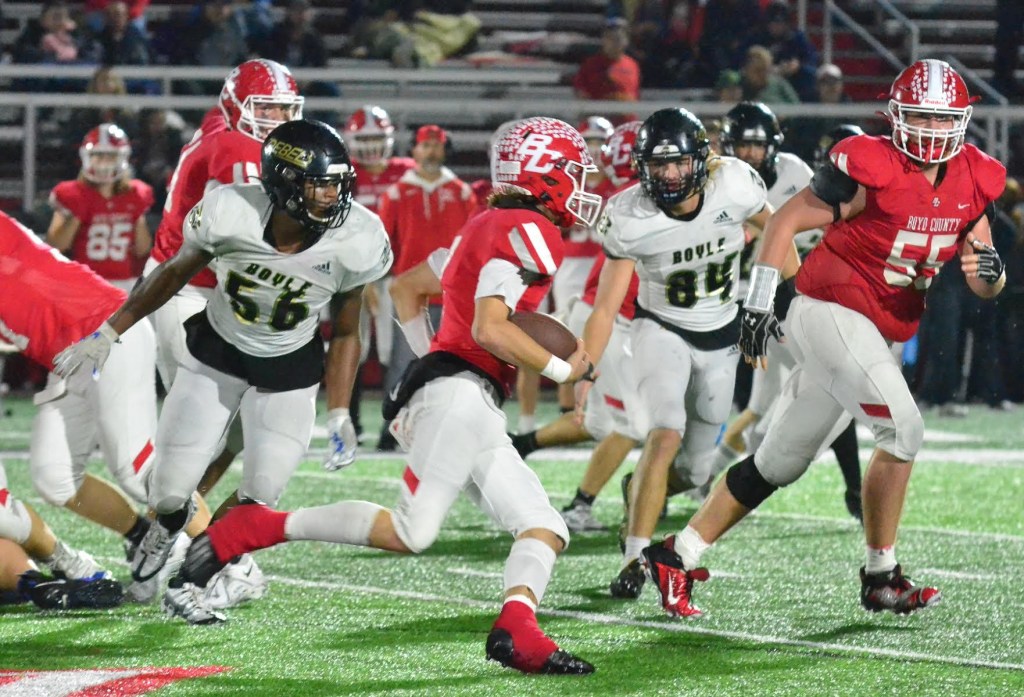 When you’ve been to the state finals as often as Boyle County has, you know what to expect in the days leading up to the big game.

Things that might be distractions for less-experienced teams become scheduled events when you know they’re coming.

At Boyle, which will make its 13th appearance in a title game Friday when it faces Corbin in the Class 4A championship in Lexington, those events have become almost routine. However, coach Justin Haddix said they haven’t become old hat.

“That’s something we don’t take for granted,” Haddix said. “It’s a special time. Our kids understand that.”

The seniors on the Rebels’ roster are experiencing their fourth consecutive championship week, becoming the fourth class in school history to do so and the first since the class of 2004.

Boyle players visited the elementary and middle schools around the district, and they also were celebrated in their own school, where activities were held throughout the week to fire up the student body.

There was the final full practice of the season Thursday night, and a walk-through is planned for Friday morning. It will all culminate in a sendoff, after which the team buses left town on roadways lined with signs urging them to victory.

Earlier this week, some of Boyle’s seniors talked about some of the highlights of the week: aside from the game, of course:

What are some of the best things that happen leading up to the game?

John Rahbany, running back-linebacker: “I like going around to all the schools, seeing all the little kids, them getting excited.”

Christian McGlone, wide receiver-defensive back: “I think it’s going around to all the schools and getting to see everybody, because it shows how much the community supports us and I think that’s really cool to see.”

Jakei Tarter, wide receiver: “For me, the best thing is that the entire community comes out and watches and it’s a big community thing. It means a lot, because I feel like it’s not just our team, but I feel like we have a bigger team within the community.”

Andrew Hardwick, offensive and defensive lineman: “I’d say the greatest thing is just seeing all the support from the community, from little kids and students. And then on the way to the game everybody puts up signs. The whole community kind of unites around us, and it’s amazing to see that. It gives you more of a purpose when you play.”

What do you enjoy most about visiting the elementary and middle schools?

Hardwick: “It’s an amazing feeling. A lot of those little kids look up to you. I remember back in my seventh-grade year (2017) when the high school team came through, they don’t really know you, but seeing Will Bramel, Mitchell Paycheck (and) some of the other linemen I always watched whenever I was younger, seeing them and being able to support them was a really cool feeling. That’s kind of who you want to be when you get older.”

McGlone: “It’s just really cool because they’re all smiling, and they want to give the whole team high-fives.”

What did it mean to know Thursday’s practice was your final practice at Boyle?

Cooper Brummett, offensive and defensive lineman: It’s exciting that I know my deadline when the season’s over. Most people, their seasons end abruptly, but our story’s a little different. It’s nice to have a finite end, and I’m excited for it.”

Rahbany: “It’s crazy to think it’s going to be my last practice ever. It’s kind of a bittersweet moment, knowing that we’re going to state but then also knowing that I’m done after Friday night and this is my last one.”

McGlone: I think it’s a little bit emotional because I’m a senior now … but it’s also exciting because that’ll mean the next day we have a chance to win state.”

Brummett: “It’s exciting. It’s riled up for sure. We’re trying to get as riled up as possible.”