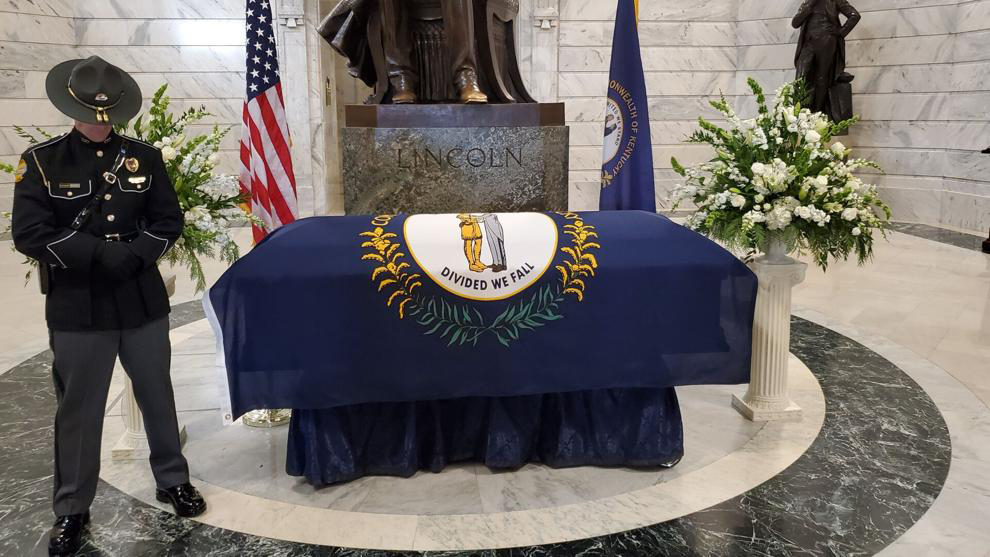 A great salesman, entrepreneur, governor and father – those were the comments from people who stood in line to pay their respects to former Gov. John Y. Brown, Jr. His body lay in state at the Capitol Rotunda on Tuesday, a week after he passed away at 88.

His casket was placed in front of the Abraham Lincoln statue in the center of the Rotunda, with a Kentucky State Police honor guard by his side, as people filed by to honor Kentucky’s 55th governor one last time.

“Governor Brown did it his way,” said Martha Layne Collins, who served as Brown’s lt. governor before she was elected to succeed him in 1983. “He changed things. He added, he subtracted, and he laid some groundwork that we were able to build on. Above all, he loved Kentucky, there was no question about that.  He was the talk of the town, the state, the United States, and everything.”

Current Gov. Andy Beshear noted, “Gov. Brown was a remarkable leader who was committed to serving the people of Kentucky. He made our commonwealth a better place.  Britainy and I are praying for his family and loved ones.”

“He was probably one of the most positive people that I ever knew,” said Jim Host, an entrepreneur himself, who built Host Communications into a huge media empire. “He and I were good friends for over 60 years. He and I were in school at the same time. He lived the last five years of his life about a nine iron from me, so we spent a lot of time together discussing politics, our love for the University of Kentucky and UK athletics.”

Brown’s son, John Y. Brown III, who served two terms as Secretary of State, also said his father loved Kentucky. “He was a salesman at heart, and I think of all the roles he had he loved being governor because he got to sell Kentucky to the world and promote Kentucky. That meant so much to him and was so gratifying. Certainly, his four years as governor was the most meaningful of his career.”

The younger Brown said his dad’s happiest years were the last five or 10, “Where he really settled down and spent time with family. The last six weeks were sad for us, but we had a lot of sweet moments visiting with him. All five of his children around his bed, loving on him, it was a wonderful way to go. If you judge a man by how he dies, I don’t think he could have died a more noble or loving dad.”

Brown’s business ventures included purchasing Kentucky Fried Chicken from founder Harland Sanders in 1964. Brown turned KFC into a worldwide success and sold his interest in the company for a huge profit in 1971.

During the 1970s, he also owned the Kentucky Colonels of the American Basketball Association, as well as two NBA teams, the Boston Celtics and Buffalo Braves (now the Los Angeles Clippers).

When he ran for governor in 1979, his motto was “Run the state like a business.”