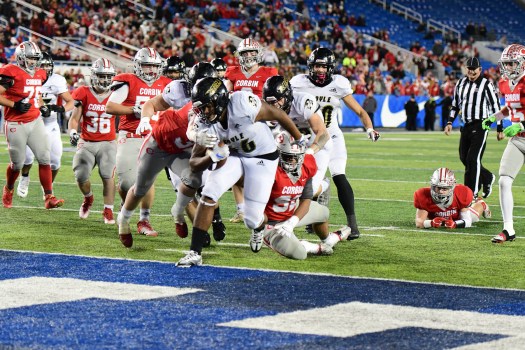 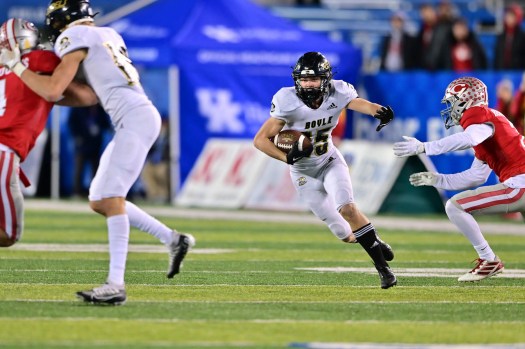 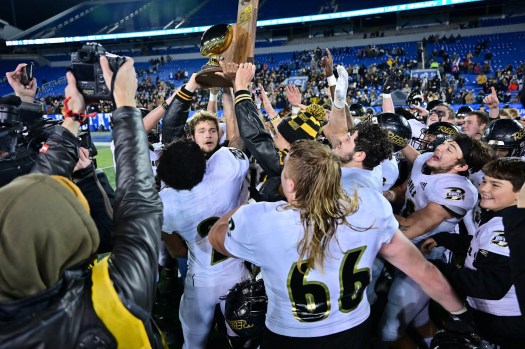 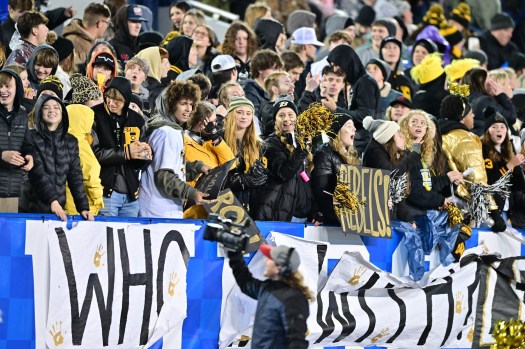 LEXINGTON — Boyle County had just enough gas left in the tank to haul the trophy home.

The Rebels spent a great deal of fuel to capture their third consecutive Class 4A championship, but they had plenty to burn.

A team made more versatile out of necessity used both conventional and unconventional plays, a mix of style and sheer will, to outlast Corbin for a 32-26 victory Friday night before 6,181 fans at Kroger Field.

The victory gave Boyle its 11th state championship and its third in as many seasons under coach Justin Haddix, who told his players they would need to give everything they had to get what they wanted.

Boyle faced a formidable foe in its bid for a three-peat. Corbin was undefeated and No. 1 in the Class 4A RPI standings, and the Redhounds kept the pressure on the Rebels throughout a windy and sometimes rainy night.

Boyle trailed for only 1:39, but Corbin was never far away. The game was tied four times, and the teams were never separated by more than seven points.

“Our guys weren’t going to be denied. … No way anybody could play harder than we were going to play,” Haddix said.

Boyle (13-2) won its 11th championship in 24 seasons, becoming only the seventh Kentucky school to win more than 10 since the KHSAA playoffs began in 1959.

The Rebels have lost only three of 41 games since Haddix left Corbin for Boyle in 2020, including two this season — only once before had they won a title with more than one loss — in an indication that this championship run was a bit more difficult than most.

A succession of injuries that began in the summer camp season and stretched into the postseason forced Haddix and his staff to repeatedly reconstruct the Rebels’ lineup.

However, that might have resulted in a more versatile team as starters switched positions and reserves stepped up.

Two of Boyle’s five touchdowns were scored on atypical plays, including an end-around by a lineman that put the Rebels in front to stay.

Tommy Ziesmer scored on a 7-yard run with 9:34 remaining to put Boyle on top for the final time, and the Rebels put the Redhounds away with two defensive stops and a fourth-down conversion.

Ziesmer was one of two Rebels who scored their first touchdown of the season in the title game. Cooper Brummett, a tight end who spent much of the season on the offensive line, caught his first pass of the season and scored his first career touchdown when he got open in the end zone to catch an 11-yard jump pass from Dawson on the opening drive.

“Having experience helps, and I think a lot of our guys are experienced playing in big games,” he said. “We came together as a team and we all knew what we had to get done, and that’s what we did.”

As they had throughout the postseason, the Rebels excelled at running the ball and stopping the run. The Rebels got 270 of their 363 yards on the ground, and they held the Redhounds, who were averaging 201 rushing yards and 375 total yards per game, to 140 yards on the ground and 289 yards in all.

Bodner, who ran for 154 yards in the Rebels’ title game win over Johnson Central a year ago, had 23 carries for 100 yards and a touchdown and also threw a touchdown pass Friday.

Sage Dawson rushed for a game-high 109 yards and threw for 69 yards with a touchdown pass and a touchdown catch. Montavin Quisenberry had 54 rushing yards and 147 all-purpose yards — including 81 return yards — along with a rushing touchdown.

And the decisive score came from Ziesmer, who started the game at right tackle but lined up one spot to the right at tight end for this play. He ran right to left behind the line to take a handoff from Dawson, turned the corner and escaped the grasp of three different defenders to reach the end zone and break a 26-all tie.

Corbin (14-1), which had scored on its two previous possessions in the second half and four of six drives to that point, was forced to punt on its next series but got another chance less than two minutes later.

Jacob Baker intercepted a pass to set the Redhounds up at their own 46 with 5:30 remaining and set the stage for the Rebels’ last defensive stand.

Cameron Combs, who led Corbin with 85 rushing yards, ripped off a 14-yard gain on the next play, but two successive runs netted only 5 yards and Stone made a stop on third down for no gain. On fourth-and-5, quarterback Kade Elam then overthrew his target, giving Boyle the ball back at 3:25.

Three running plays left the Rebels a yard short of a first down that would allow them to run out the clock. They went for it from their own 44-yard line, and Bodner took a direct snap and blasted into a surging line of scrimmage for a 2-yard gain that ignited Boyle’s celebration.

“Our guys left it on the line. They played at 110 percent all night, (but) we didn’t make some stops when we needed to make some stops,” Corbin coach Tom Greer said.

It was Bodner’s second fourth-down conversion of the game. His 4-yard gain on fourth-and-3 from the Corbin 23 led to his 7-yard touchdown run that gave the Rebels a 20-13 lead 12 seconds before halftime.

Elam ran for a touchdown on the first series of the second half to tie the game. He ran for two TDs and threw for 149 yards and two TDs for Corbin.

Boyle regained the lead at 26-20 on a 21-yard run by Quisenberry, but Corbin answered once more when Brody Wells broke free for a 56-yard touchdown catch that tied the game at 26-all.

“We weren’t going to be denied,” Dawson said. “There was no way we were getting out of here without that gold trophy.”