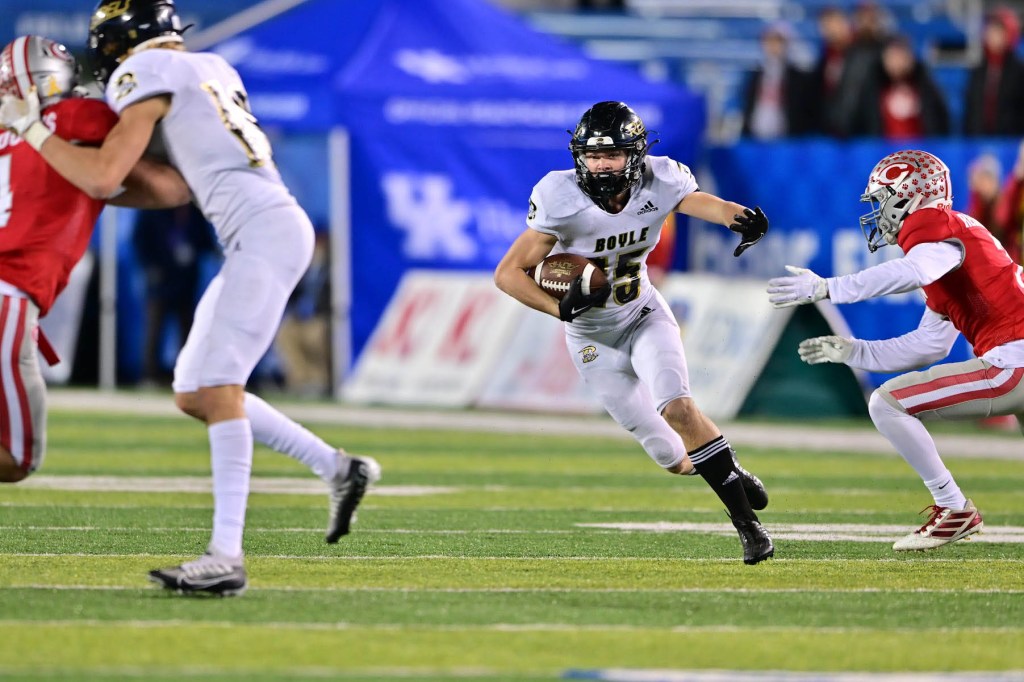 LEXINGTON — Boyle County can do many things well, but it built its latest state championship on the same foundation so many other winning teams have used over the years.

Running the ball effectively and playing sound defense have long been a formula for success, and they were the key ingredients for Boyle on Friday night and throughout the postseason.

The Rebels relied primarily on the running game on offense while their defense limited Corbin’s big plays as they powered their way to a third consecutive Class 4A championship with a 32-26 victory at Kroger Field.

Boyle rushed for 270 yards, running the ball on 43 of its 56 plays and averaging 6.3 yards per attempt against a Corbin defense that had recorded six straight shutouts in October and November.

“I feel like we were able to control the run game and be able to run the ball, create holes,” Boyle tackle Andrew Hardwick said.

Quarterback Sage Dawson ran for 109 yards, running back Avery Bodner ran for 100 yards and all-purpose threat Montavin Quisenberry had another 54 yards for Boyle.

Boyle had a handful of long drives in its win. The Rebels drove 80 yards in 13 plays for their first score and had two other scoring drives of 10 plays each as they scored on five of their first six possessions.

Bodner said the Rebels’ running success was due to the work of the offensive line, a unit that was rearranged several times during the season because of injuries.

“Our line, you never knew who was going to play because we were battling injuries the whole time, but we got everybody back in the playoffs and they dominated up front,” Bodner said. “I can’t do my job without them doing their job, so I give all my credit to them.”

Boyle relied much more heavily on the run in the postseason, though it still made big plays in the passing game. Some of that stemmed from the fact that Bodner played quarterback in the first two playoff games while Dawson was injured, but the trend continued even after Dawson returned.

The Rebels averaged 200 rushing yards per game during the regular season, but that average shot up to 276 yards over their five playoff games, during which they got 71 percent of their total offense via the run.

Dawson said it made sense to run more and pass less because it was working so well.

“The offensive line is coming through, doing what they’re supposed to do. Avery’s running the ball hard. Why not hand the ball off?” he said. “They can’t stop it, so keep doing it.”

On the other side of the ball, Boyle’s defense didn’t shut Corbin down but did hold its own against a powerful offense. The Redhounds entered the game averaging 201 rushing yards and 375 total yards, and they got 140 rushing yards and 289 total yards against the Rebels.

Priority one for the Boyle defense was containing the run, as it always is.

“We had to stop the run,” said linebacker Dalton Stone, who led the Rebels with 9½ tackles. “The first half it was very tough, but we kept fighting.”

Corbin had 89 rushing yards at halftime but got only 27 in the third quarter and 24 in the fourth, averaging just 3 yards per attempt in the second half.

Ziesmer said when the Rebels needed stops in the fourth quarter, their level of determination only went up.

After Boyle took a 32-26 lead with 9:34 to play, its defense forced one of only two Corbin punts on the next series.

When the Redhounds got the ball back at their own 46-yard line with 5:30 left, they gained 14 yards on their first play before Boyle’s Stone made two tackles and Jayce Crowe made one to hold them to 2, 3 and zero yards on three rushing attempts.

On fourth-and-5, Crowe and Hardwick were rushing toward Corbin quarterback Kade Elam when he overthrew his intended receiver.

Bodner, who also plays safety, said even though Boyle did many good things on offense, its defense might well have won the game.

“I think so, because we got more stops on defense than they (had big plays) on offense,” he said. “Late in the fourth quarter our defense really stepped up and got those stops for us.”