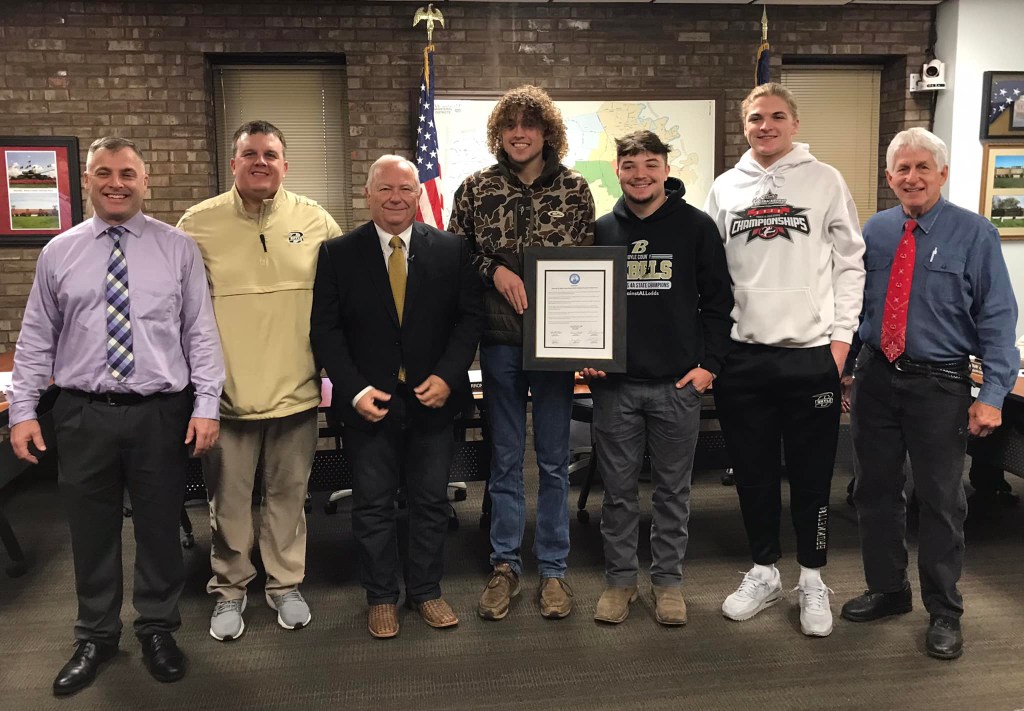 The Fiscal Court recognized the Boyle County Rebels football team for winning the Kentucky 4A state championship for the third year in a row.

“A three-peat is a really rare thing,” Hunt said. “Here in Boyle County, which is also nicknamed Titletown, it’s becoming not commonplace, but an expectation, and this is a great thing to expect because people love winners, and Boyle County Rebels are winners on the field and in the classroom.”

Haddix thanked the court, saying the credit goes to the team.

“I’m very blessed to be able to coach here, it is a special place, and these young men deserve all the credit,” Haddix said. “We try to guide them … but those are the kids who have to go do it every day.”

Hunt said the skills Haddix teaches help the team in life and in the classroom.

“What he is doing is immeasurably important to life because he’s giving these young men accountability, responsibility, and those skill sets will make them a success in life, not just on the athletic field.”

The court heard an ethics complaint about a member of the Fire Protection District board.

The ethics board gave the opinion that Coffman should not be able to serve as the property owner. With this ruling, the fiscal court determines whether to have a removal after an ethics hearing. Coffman chose to have a public hearing on the matter and presented some new information.

Coffman said at the time of his election to the board, he was an active firefighter with Perryville. However, he recently resigned from the Perryville Fire Department to spend more time with his family.

Magistrate Jamey Gay said that this clears up the issue of being an active firefighter, and that he should be allowed to continue serving.

Magistrate Jason Cullen said the issue at hand is about checks and balances for the citizens. He said if Coffman wasn’t eligible to run at the time he was elected, he shouldn’t be able to serve.

Coffman also said that the same Kentucky law that says property owners can’t be firefighters also states that nominations for property owner representatives shall be made in accordance with the bylaws of the fire department.

At the time of Coffman’s election, the Boyle County Fire Department stated that property owners could not be an active member of the fire protection district. Coffman was active in another district.

The person serving before Coffman as the property owner representative was also the chief of the Perryville Fire Department. Coffman said that person gave him the Boyle Fire Department’s bylaws, and he wasn’t aware he might be ineligible to serve at the time.

“Just because something was done before doesn’t mean we continue doing that wrong thing going forward,” Cullen said.

Boyle County Attorney Chris Herron and Hunt agreed that the Kentucky law needs clarification on whether the Boyle department bylaws determine actual eligibility for serving on the board, or if it is only for nominations.

Magistrates generally agreed that the issue of Coffman being an active firefighter is resolved with his resignation. They voted to let Coffman continue serving on the board, with Cullen being the only no vote.

Coffman went on record saying he will not work for a fire department while serving on the fire board.

• Agreed to designate $5,000 to help facilitate and pay for an economic development symposium that will bring in experienced speakers. The City of Danville is planning to have this symposium in January, and the city will contribute the same dollar amount.

• Heard a proposal for new Coroner Eric Guerrant to be a possible new joint medical advisor for the county and City of Danville. More information will be presented in an upcoming meeting.