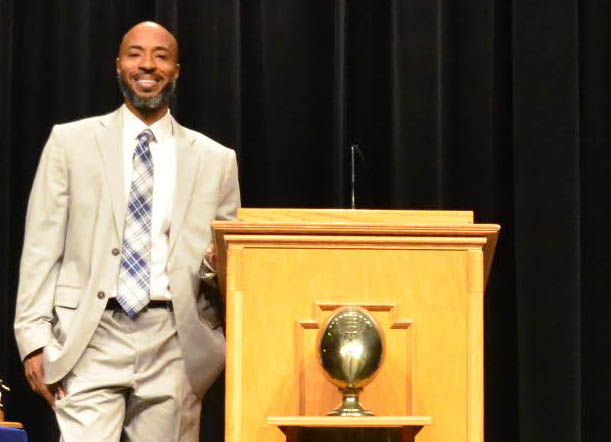 Frank Parks says Danville’s future is as bright as its past. Photo by Mike Marsee

Frank Parks Jr. was attracted to Danville not only by the program’s past, but also by its future.

Parks, who was named the new football coach at Danville on Friday, said he is excited about the opportunity to return a tradition-rich program to championship contention.

With the Admirals’ 11 state championship trophies arrayed on the stage behind him during his introduction at the school’s Gravely Hall Performing Arts Center, he said his goal is for Danville to be playing in the later rounds of the playoffs on a regular basis once again,

“I thought this would be a great time to come and try to lead this program and revitalize and reenergize it and get opportunities to start playing on Thanksgiving weekend and have a chance to play at Kroger Field,” Parks said.

Parks, who spent the past two seasons as head coach at Berea and previously was the head coach at Bryan Station, was introduced to Danville players Friday afternoon.

“This is one of the premier programs in the state of Kentucky (with) 11 state titles and all the history and tradition, and you have a great community who is really involved and really love their football program. These opportunities don’t come up too often,” he said.

He has also been an assistant coach at East Jessamine, Madison Central and Bryan Station.

Danville principal Chad Luhman assembled a committee made up of people from both inside and outside the school system to find a replacement. He said a pool of 15 to 20 applicants was whittled to six finalists who were interviewed.

“Coach Parks just jumped off the page at us immediately,” Luhman said. “He had a lot of experiences that would translate well to our program.

“He just kept impressing us with his interviews and the experiences he had and the things that he had developed. His entry plan and the weightlifting (plan) was very exciting. (He impressed us) not only as a head football coach, but getting kids into college (and being) successful with student-athletes taking the next step.”

Danville has not advanced beyond the second round of the playoffs since its most recent state championship season in 2017, and Parks said his priority is to change that.

“It’s a very tangible goal to be playing for state championships. You can see it with those trophies there on the stage,” he said. “We’ve got to get some consistency as far as our workouts go, getting back to being committed, and some accountability and just believing and really putting in the work.”

He said it won’t take long to get the program back to that point if the players are willing to work for it, and he said players should be ready to get to work in the weight room when the spring semester begins in January.

“We’ve got to outwork everybody,” Parks told the players, specifically mentioning crosstown rival Boyle County — though not by name — and district rival Lexington Christian. “We’re going to get this thing turned around sooner rather than later, but we need everyone in this room to be a part of it.”

Danville began the 2022 season with 41 players on its roster, but that number dwindled during the season. However, Parks said the turnout for his meeting exceeded his expectations based on the numbers he saw on video of the final game of the season.

“I think that’s a plus, and I think as things get going and kids get to talking about things we’re doing, I think we’ll be able to increase the numbers just by the positive influence by some of their peers,” he said.

Talk of players leaving for other schools cannot be ignored, but he said he isn’t worried about possible transfers.

“You’ve got a program of great tradition. You may have one or two defections regardless of the situation, but you may get two or three back,” Parks said. “Those guys that are here (are the ones that are) really going to put in the work and get this thing going in the right direction.”

Luhman was the athletic director at Bryan Station when Parks was hired there in 2012. He said he was transparent about their working relationship from the beginning of the hiring process at Danville, and he said members of the hiring committee did their own fact-finding when it came to checking references and gathering information on Parks and the other finalists.

“I really did a lot of listening to the committee,” Luhman said.

Parks, whom Luhman said will fill a teaching position at Danville in the spring semester, played for Madison Central and was a 1999 NAIA All-America defensive back at Georgetown College. He holds the NAIA single-season record for interception returns for touchdowns (four in 1998).

Parks said he relishes the expectations that come with coaching in “Title Town,” recognizing that pressure comes not only from Danville’s success but also from that of Boyle, which has an identical number of championships after winning its latest earlier this month.

“I always use the phrase, ‘Pressure does two things: It either makes diamonds or busts pipes.’ We’re going to use it to make diamonds,” Parks said. “That should drive us to want to give it our best and be at the top of our game.”