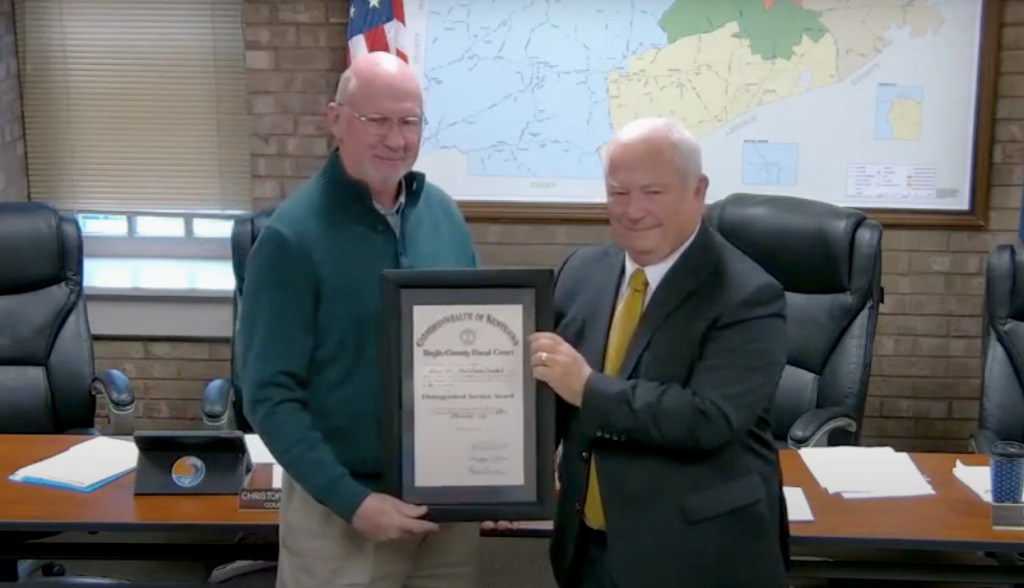 At the Fiscal Court meeting on Dec. 6, Judge Executive Howard Hunt presented Campbell with a Distinguished Service Award for diligent, loyal, and outstanding service to citizens.

Campbell was first hired by the county in 1986, left between 1992 and 1996 when he worked in Lexington, and then came back to the county. Hunt said Campbell being an engineer has greatly helped the county.

“Duane’s presence as an engineer has provided this county with a distinct advantage in all discussions in which our road department has been involved,” Hunt said. “This county is going to miss him greatly, and I can say that with first-hand knowledge.”

Magistrates thanked him for his service. They said Campbell is proactive in working with the state government, looking at what roads need resurfacing, and always responds to problems in a timely manner.

“Duane is just the epitome of a public servant; he’s always available, accessible, and most importantly responsive when you need something done,” Magistrate Jamey Gay said. “It is going to be a tremendous loss of institutional knowledge and that’s always so hard to replace.”

Campbell said he will miss his weekly conversations with magistrates, and that he always worked with great people. However, he will not miss dealing with the snow and ice storms.

“You’re a public servant, and that’s what I enjoyed most is serving the people,” Campbell said. “You want to try to do everything you can for the people, and the tough part about it is sometimes you can’t, and sometimes you have to find a way to tell them ‘no’ in a kind way.”

He said in his retirement he might teach classes for UK and the transportation center.

Human Resources Director Steve Griffin presented a job description for an interim position to cover some of Campbell’s duties when he leaves. Griffin said he doesn’t believe they will have a replacement Public Works Director by the time Campbell leaves. The court approved the job.

The position will supervise road crews and act as kind of an interim director. Griffin said he’s encouraging people already at the road department to apply for the job. The job has the potential to turn into an assistant or deputy to the new director when hired.