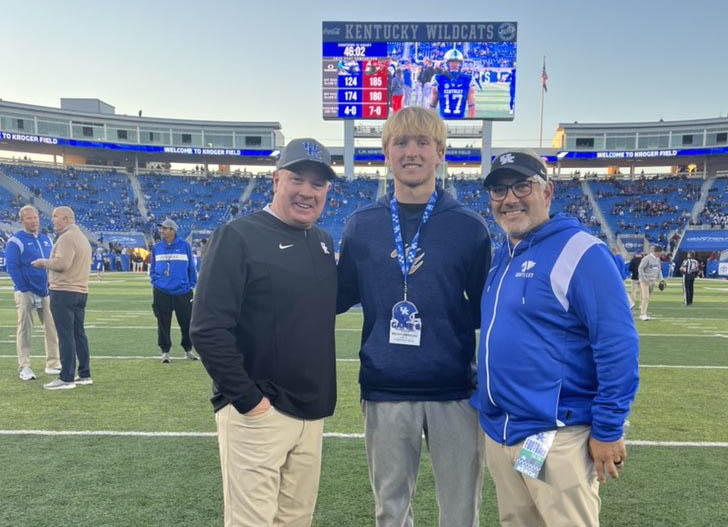 He’s not the highest rated player in Kentucky football’s 2023 recruiting class and not a name that many UK fans probably even knew when he made his commitment to UK. However, long snapper Walker Himebauch might be one of the  most important pieces in Mark Stoops’ next recruiting class.

Kentucky had all sorts of issues with its kicking game this season to magnify how important a long snapper can be — a point that was also hammered home when the Cincinnati Bengals lost a game after the team’s backup snapper failed on two snaps in a loss.

The 6-2, 210-pound Himebauch is considered one of the nation’s best snappers according to various recruiting analysts and kicking schools but he admits he was surprised with the reaction from UK fans his commitment generated.

“I looked at social media and had no idea it was that big a deal. I am super excited to have a fan base that knows and appreciates what a long snapper contributes. Usually nobody knows who you are until you mess up,” he said.

He played for Palmer Ridge High School in Colorado after starting his high school career in Reno, Nev. Himebauch also started at tight end and defensive end the last two seasons after playing outside linebacker and left tackle earlier in his career. He also competes in the shot put, discus, long jump and 100-meter dash in track.

He had a full scholarship offer to UNLV along with offers from Coastal Carolina, Washington and Charlotte and interest from Kansas, Hawaii, Colorado and others.

Himebauch was initially contacted by UK quality control analyst Louie Matsakis after he had reached out to several groups that rank long snappers and they recommended Himebauch.

He visited Kentucky for the South Carolina game and even though UK lost, he was blown away by the atmosphere and facilities. He was offered a preferred walk-on spot the next day.

He had a connection to UK. His father, Jonathan, was a former college player/long snapper who also played in NFL Europe and the Canadian Football League for five years and has coached at the high school, college and professional level. His father, a team captain during his time at Southern Cal, is now the offensive line coach for the Arlington Renegades of the XFL.

“My dad said he was the best player on teams that won the Grey Cup (in 2009 and 2010). It’s nice to have that connection,” the future UK long snapper said. “Anwar saw me at the South Carolina game and brought us to the field. Louie took me to meet (coach Mark) Stoops at midfield. They really gave me the red carpet treatment. I felt I was needed for who I am and the position I play. Seeing all the fans go crazy just made me feel at home.”

Himebauch, who visited UK again last weekend, did not grow up wanting to be a long snapper. His freshman year of high school he was a punter/kicker. That was also his first year playing tackle football.

“My team did not have a need for a kicker or punter my freshman year. We had a junior that was the guy,” Himebauch said. “My dad told me if I wanted to be realistic and play Division I, then long snapper might be the position for me.”

Kentucky had a series of kicking game mishaps last season but Himebauch said no job has been guaranteed to him.

“I have to come in and compete and prove myself and I can do this,” he said.